Here are some of the "moldy oldies" in my Philology Collection. At least that's what my wife Linda calls them. And since her allergist agrees with her, you won't find any of them in our bedroom. 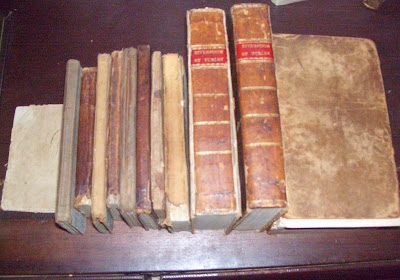 These books are old, but they're not moldy. Some of them are over two hundred years old. The oldest grammar in my Philology Collection, a second edition of Hermes, by James Harris (1709-1780) was published in London in 1765. The work was first published in 1751: 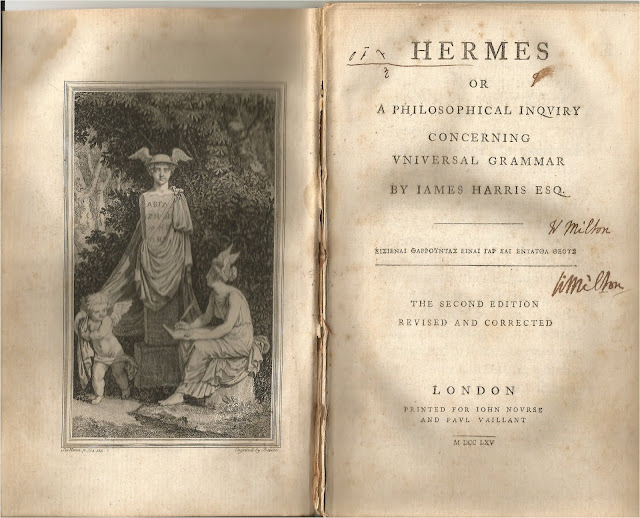 In his book, Harris tells us that the God who was the Inventor of Letters and Regulator of Language was known to the Egyptians as THEUTH, and to the Greeks as HERMES. The frontispiece above, by Basire, displays the winged head of Hermes. The head without a body signifies that no other part of the body other than the head was deemed "requisite to rational Communication." The wings on the bonnet represent words, the medium of Communication, winged words, as Homer described them.

A glimpse of the Table of Contents will give you an idea of the subject matter of Hermes: 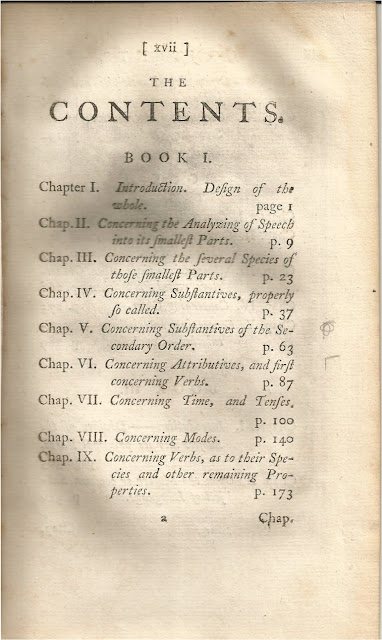 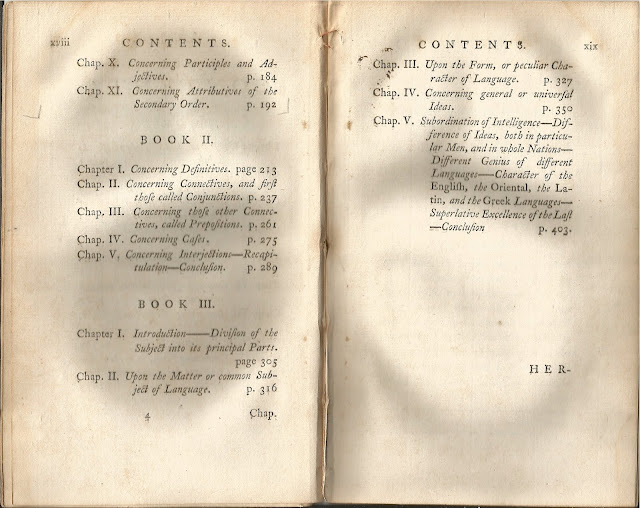 Hermes, Or a Philosophical Inquiry Concerning Universal Grammar is divided into three books, but published and bound as one. My copy is currently divided into sections. I have removed all of the the old thread, and the book is ready for resewing and rebinding. Samuel Johnson, by the way, was no particular fan of Harris and his book. According to Johnson, Harris didn't understand his own system. Moreover, Johnson alleges that Harris's fourteen-line dedication contains six grammatical errors. 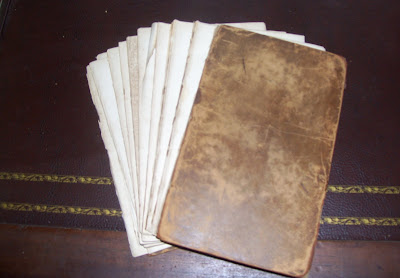 I have another book by James Harris that was published in 1781, the year after he died: Philological Inquiries in Three Parts: 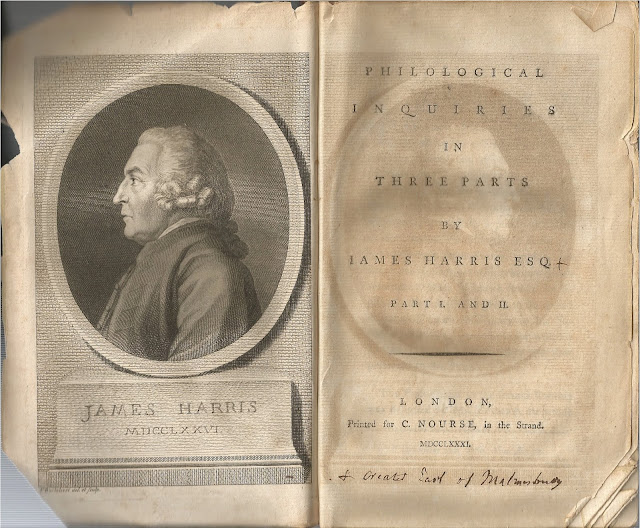 Part III is bound in this book as well, and with a separate title page. This book is a writing guide on Samuel Johnson's other definition of philology: criticism. But it is written on a level that is well over my head.

If John Horne Tooke were living during the time of the American Civil War, he most certainly would have fought for the Confederacy, for he was truly a rebel. John Horne –– we'll get to how he took the name "Tooke" later –– was an early supporter of John Wilkes. Horne was a political reformer who, like Burke, publicly supported the cause of the American colonists. But he went a little too far, posting the following notice in The Public Advertiser on the 8th of July 1775:

Because of that article, John Horne was tried and convicted of libel on the British Government in 1777, was fined, paid court costs, and served a year in prison.

While in prison, John Horne corresponded extensively with the political reformer, John Dunning, soon to be known as Baron Ashburton. The topic, believe it or not, was grammar!  In fact,  when  Horne got out of prison he published a book about his grammatical conversations with Dunning. The work was aptly titled, A Letter to John Dunning.

In 1786, Horne, now John Horne Tooke –– he took the name of his benefactor, William Tooke –– used his Letter to John Dunning as a jumping board into an imaginary conversation about grammar between himself and two other individuals, one of whom was his benefactor, William Tooke. The title of the work was Epea pteroenta; or, The Diversions of Purley. Translated, the Greek phrase in the title means "winged words." Sound familiar? And Purley was the location of William Tooke's estate, where John Horne Tooke was a frequent visitor.  John Horne Tooke published a second volume of  imaginary conversations about grammar in 1805.

I have the two-volume First American Edition published in Philadelphia in 1806: 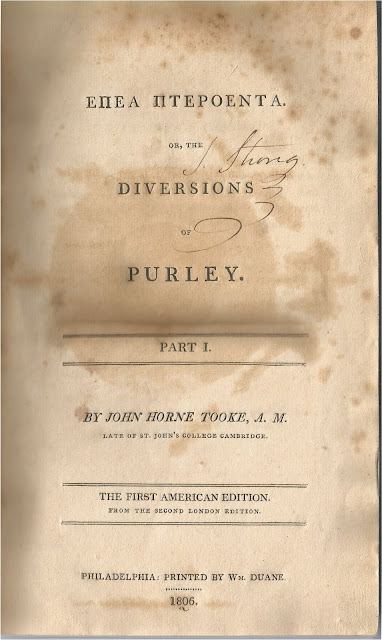 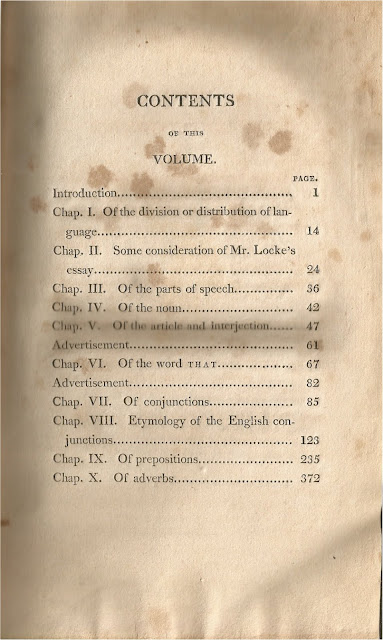 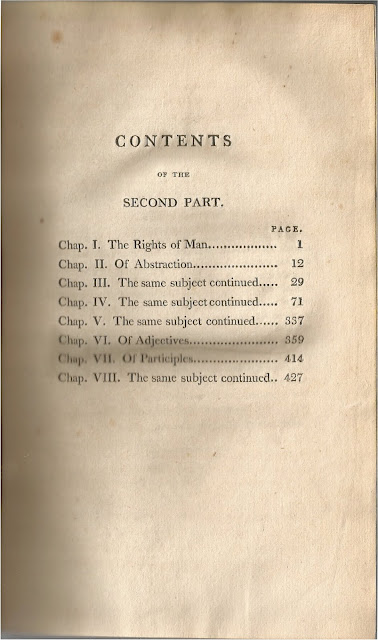 The chapter, The Rights of Man,"isn't about Thomas Paine's work; it is about the many definitions of the word "right."

Of note* is the frontispiece of the first volume, an illustration of prepositions. It was engraved by William Kneass (1781-1840), who later became the Chief Engraver of the United States Mint, a position he held from 1824 until his death in 1840. 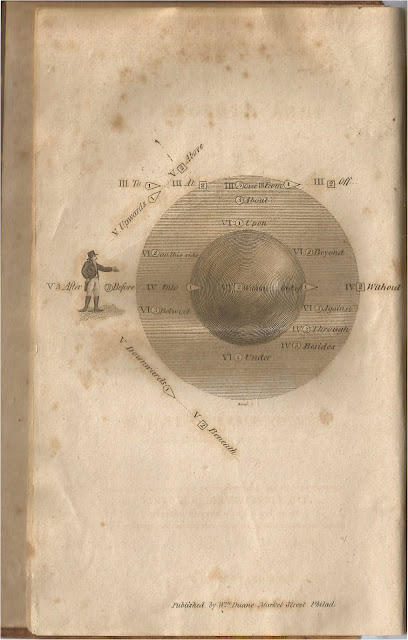 Every American knows about Webster's American Dictionary, first published in 1828. But how many Americans know about his Grammatical Institute of the English Language, first published in three parts in the 1780s? Webster (1758-1843) published a speller in 1783, a grammar in 1784, and a reader in 1785. He changed the name of the speller to The American Spelling Book in 1786, and to The Elementary Spelling Book in 1829. There were literally millions of copies of Webster's spellers sold in the 1800s.

My earliest Webster speller is the 1822 Albany edition of The American Spelling Book: 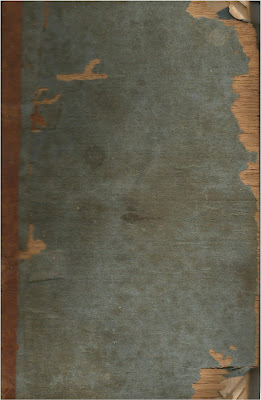 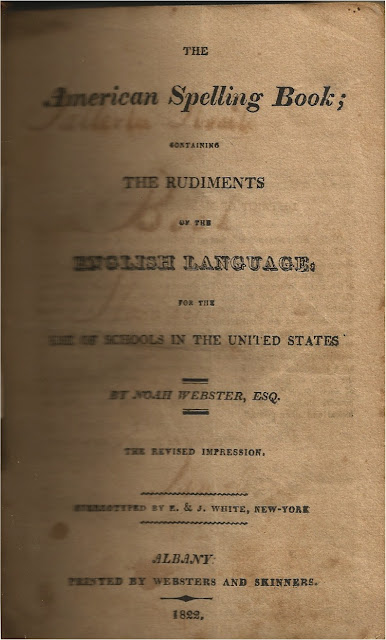 I also have two copies of The Elementary Spelling Book published after 1843. One copy was published in New York, and the other in Montpelier: 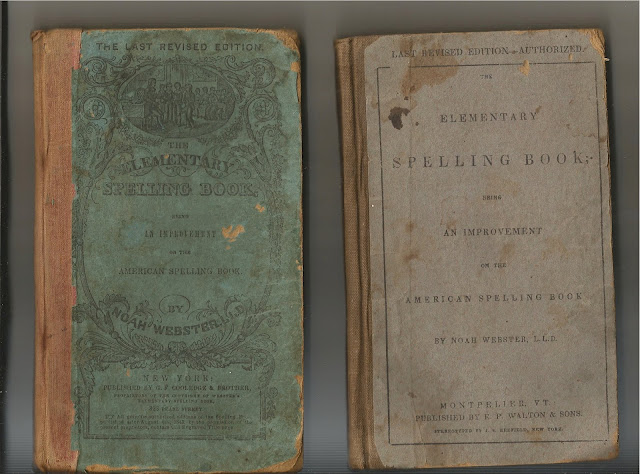 I have a copy of the sixth edition of Part the Second containing the Grammar, published in Boston by Isaiah Thomas in 1800: 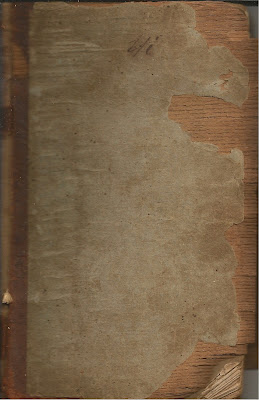 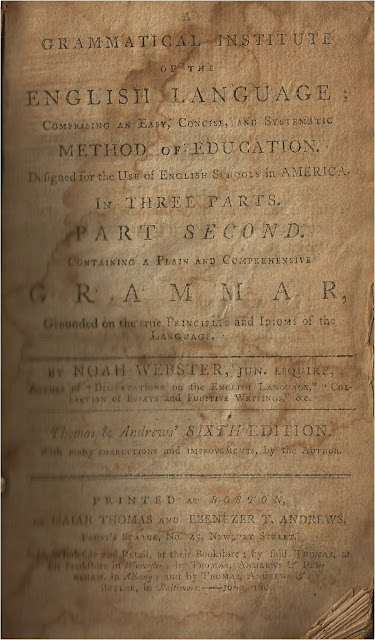 I have a copy of the 1793 sixth edition of the Third Part of Webster's Grammatical Institute of the English Language covering reading and speech; but I will discuss that copy next month when I talk about my books on rhetoric.

I have several other spellers in my Philology Collection:

A C1829 edition of The Speller and Definer; or, Class-book No. 2. This book was designed to eliminate the use of a dictionary in the classroom: 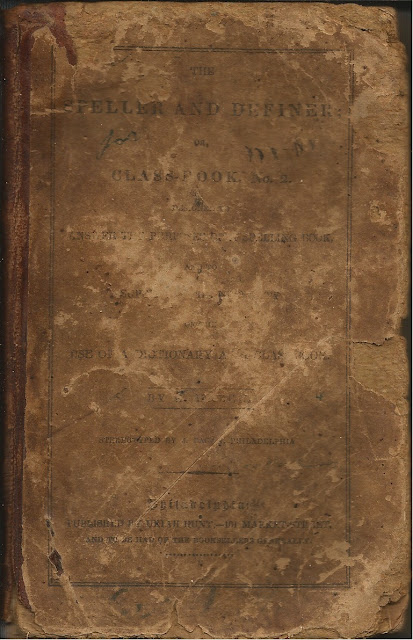 And I have two British spellers, an 1835 edition of Guy's British Expositor, and an 1859 edition of Eves's Classical Spelling Book. 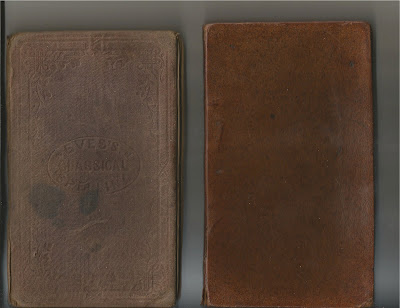 Here is a little grammar book published in 1814: The Grammatical Alphabet: 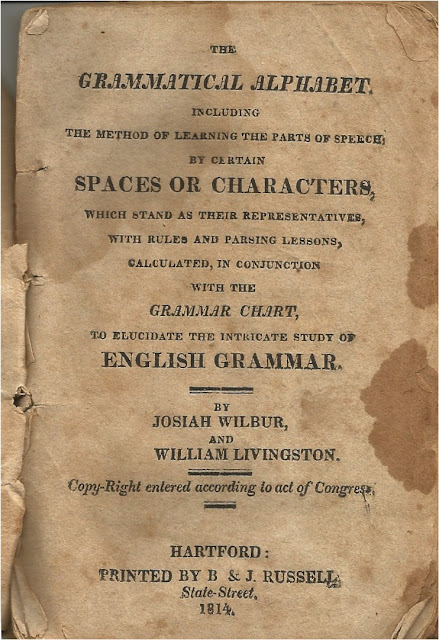 I fully intended to collect additional early grammars, and to assist me, I acquired the following bibliography: 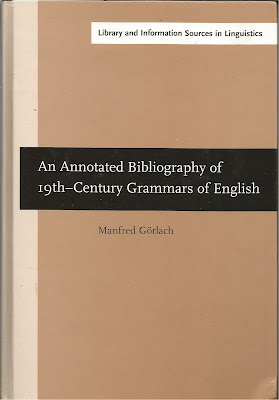 But acquiring this bibliography has had an adverse effect on my collecting of grammars. The sheer number of grammars listed in Gorlach's bibliography –– over 2300 of them in the 19th century alone –– has caused me to reconsider my book collecting wants. I am more than happy with my sampling of early grammars.

One grammar I would like to add to my Philology Collection isn't listed in Gorlach; it was first published in 1640 as part of Ben Jonson's works. I'm talking about Ben Jonson's English Grammar. Addendum:  I acquired a copy in January 2015.

Of modern grammars, I have a few, along with a number of English usage and writing guides: 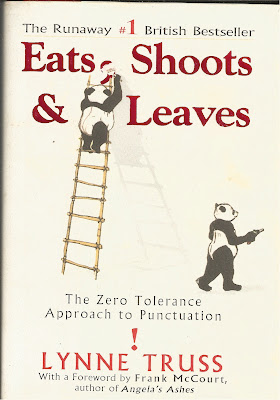 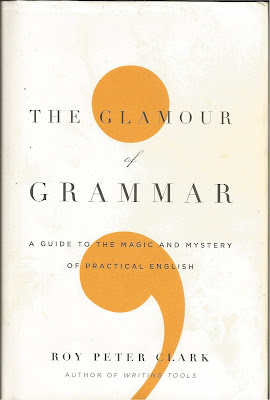 I highly recommend The Glamour of Grammar. Here is my review. 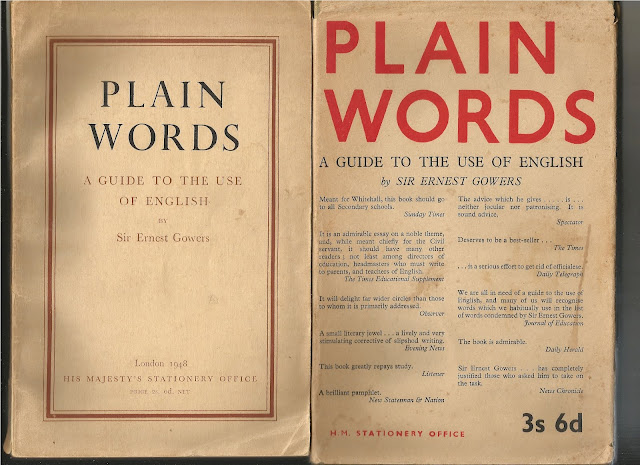 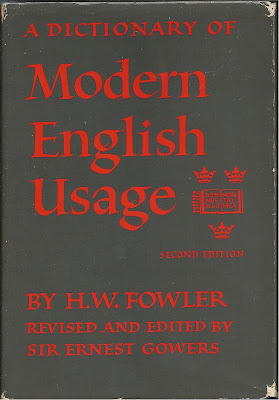 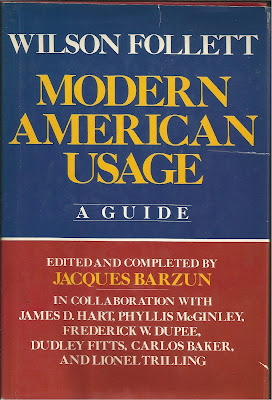 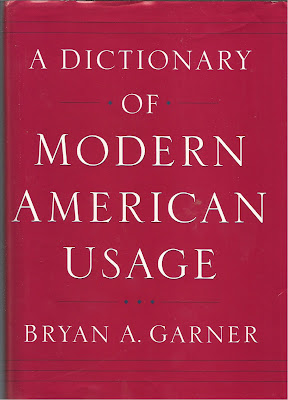 If you believe Bryan A. Garner, the author of the last book above, some of the other books listed above are nothing but trash. He reviewed some of them in his book, Garner on Language and Writing. Now Garner's book struck a nerve, a fact which is reflected in my review of the book.

While I was in the Air Force, I wrote or revised more than a few Squadron Maintenance Operating Procedures (MOIs) and local Air Force Occupational Safety and Health (AFOSH) briefings. And here was my primary writing guide: An Air Force pamphlet with its front cover long gone: 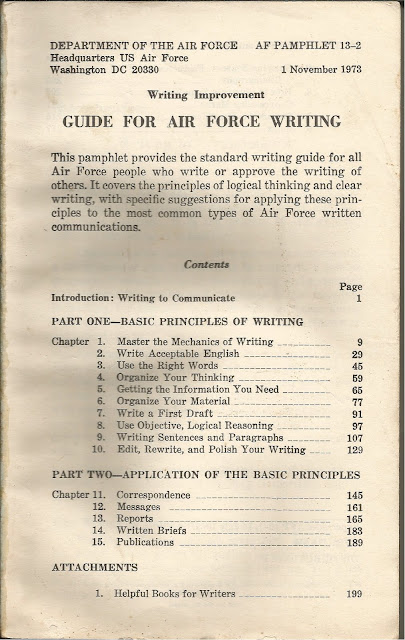 One of the "Helpful Books for Writers" listed in the attachments to the Guide For Air Force Writing is described as follows:


Gives in brief space the principal requirements of plain English style. Distinguished by brevity, clarity, and prickly good sense, it is one of the best books on the fundamentals of writing –– timeless as a book can be in this age of volubility.

Do you know the name of that book?

If you guessed The Elements of Style, you are correct. 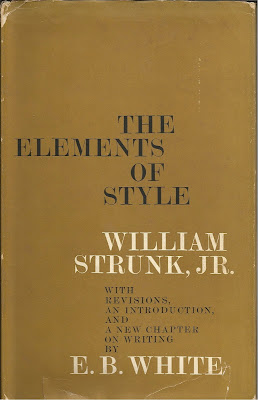 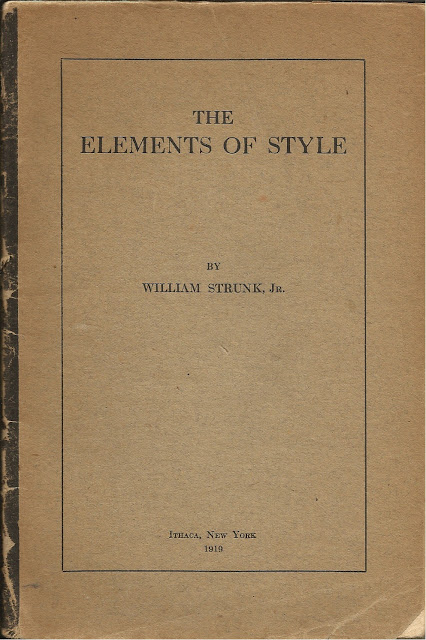 And here is my Elements of Style Collection.

This collection rests comfortably on its own shelf in the bookcase containing my Philology Collection. The other shelves, however, are overflowing with philology books, some of which aren't really worth reading. In fact, I need to cull the collection. And soon! The title below says it all!

* See  About That Engraving by William Kneass . . .