It is tough being a bibliomaniac. A bibliomaniac cannot decide which books to acquire, for he wants them all. Nevertheless, this bibliomaniac has done rather well in acquiring books for my Samuel Johnson, William Shakespeare, and Books About Books Collections.

A bibliomaniac's taste and technique will not work, however, in acquiring books for My Sentimental Library, a collection of books formerly owned by aviators, authors, actors, book collectors, booksellers, book publishers, one eccentric scientist, and other famous people. There are simply too many books to choose from. On abebooks.com alone, there are over 26,000 listings which include the phrase, "bookplate of."  Moreover, there are over 22,000 listings on abebooks.com which include the phrase, "from the library of."

Consequently, I have enlisted the aid of one of my altered egos to assist in acquiring books for My Sentimental Library. Exit: Moi the Bibliomaniac. Enter: the Sentimental Airman.

The Sentimental Airman, having served his country honorably for twenty-three years, has risen to the task once more. In but a few short years, the Sentimental Airman has considerably altered my book-collecting ego, while instilling self-discipline, promoting the general welfare, salvaging the remains of the family bank account, and keeping my wife off my back. For the latter, and for his significant contributions to My Sentimental Library, the Sentimental Airman deserves a Commendation Medal.

The Sentimental Airman didn't fly airplanes; he fixed them. Nevertheless, he has a soft spot for books formerly owned by aviators, as well as for books owned by military leaders and yes, one eccentric scientist. 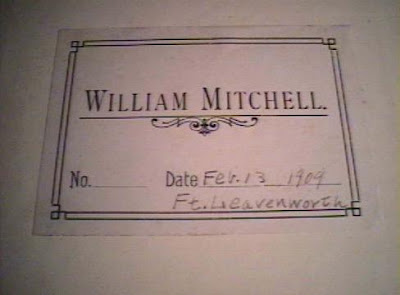 General Mitchell, known as the Father of the U.S. Air Force, argued for increased emphasis on the use of air power. He was fighting a losing battle against his superiors, however, who preferred naval power over air power. In 1925, Billy Mitchell was court-martialled for insubordination after blaming his superiors for several aviation mishaps. In 1942, Billy Mitchell was posthumously promoted to the rank of Major General after the attack on Pearl Harbor, which Mitchell had predicted; military leaders belatedly realized the necessity of his philosophy of air power.

I was hoping to find marginalia in Mitchell's hand in this book but to no avail.  I did, however, discover several pieces of paper, dated April 23, 1913, that Mitchell used to bookmark some of Napoleon's war maxims that he favored.

There is an additional historical provenance for this book; it was formerly owned by William "Wild Bill" Donovan, the Father of American Intelligence. Donovan was the Director of the OSS during WWII, and then became our first CIA Director. If Donovan left marginalia in this book, he used invisible ink.

In September, 2003 the Sentimental Airman acquired a book formerly owned by Charles A. Lindbergh: International Code of Aviation. The invoice from the publisher, Prof. Francesco Cosentini, dated May 27, 1933, as well as a portion of the mailing envelope showing Lindbergh's Broadway address, establishes the provenance. 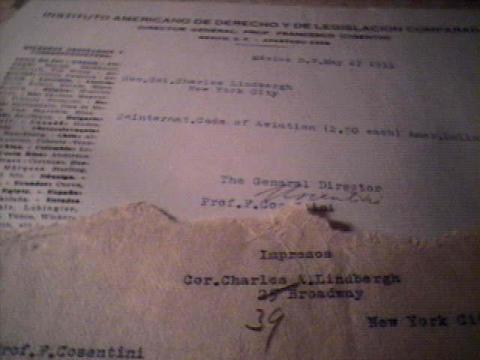 Published in 1933, the book itself was an attempt to separate aviation law from maritime law, while coordinating and consolidating the 104 national aviation laws into an improved International Aviation Law.

In October, 2003, the Sentimental Airman acquired a book formerly owned by General Robert E. Cushman.  Cushman was the battalion commander of the Marine detachment aboard the USS Pennsylvania during the attack on Pearl Harbor. Shortly thereafter, he was decorated for bravery at Iwo Jima. Twenty years later, he commanded the American ground forces in Vietnam.

General Cushman did not have a copy of Napoleon's War Maxims upon which to base his military strategy; instead, he used a copy of Oswald Jacoby on Poker. Throughout the book, Cushman underlined paragraphs on poker strategy. On the front pastedown, he meticulously wrote down the odds in Craps. If Life is a crapshoot, General Cushman knew when and how to play the odds. 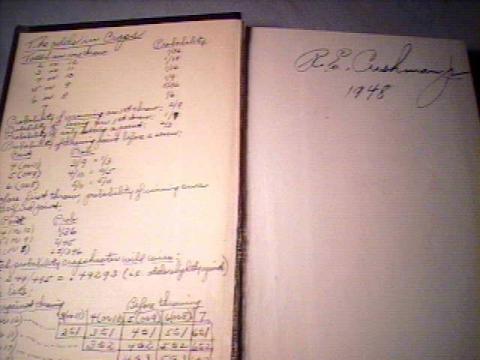 In January, 2004 the Sentimental Airman acquired a book formerly owned by one of the original Tuskegee airmen, Colonel Harry A. Sheppard. Col. Sheppard was one of our first black pilots in the military. He flew 123 combat missions in North Africa and Europe, flying P-39, P-47, and P-51 aircraft. 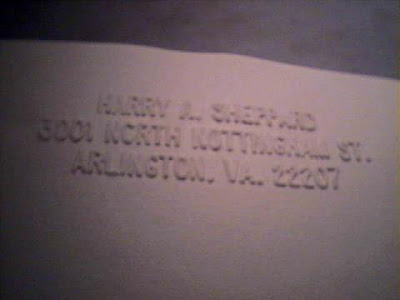 I can see why Col. Sheppard had this book, Lasting Valor, in his library. It is the gripping story of the only living black World War II veteran to receive the Medal of Honor.

In May, 2004 the Sentimental Airman acquired the following book formerly owned by an eccentric scientist: Dr. Frederick Cagle's copy of Maxims of Napoleon. At the age of seventeen, Cagle earned his undergraduate degree from the University of Illinois. In 1946, at the age of twenty-two, Cagle received his doctorate in Chemistry. He reportedly worked on the Manhattan Project, and was a protege of Albert Einstein. I can only speculate what project Dr. Cagle was working on at the time of his unexpected death in 1988; however, Dr. Cagle was a professor at the University of Utah, where research in cold fusion was being conducted. 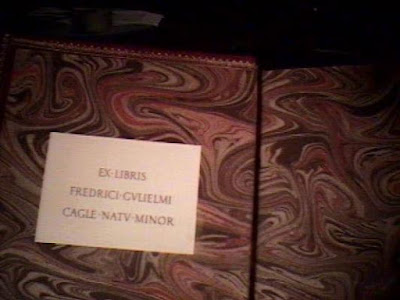 Dr. Cagle had over 60,000 books in his residence. He had bookshelves built on the walls in every room, including the bathroom and the closets. He showered in his chemistry lab, and ate his meals in a nearby pub. He never did laundry; instead he would buy shirts and other clothes in quantity, discarding them when they were soiled.

The first relative who arrived to settle his estate was overwhelmed by the number of books, and requested assistance from other family members. When the second relative arrived several days later, she discovered that many bags of valuable books had been discarded in the garbage. She saved what she could, but thousands upon thousands of books had already gone to the dump. Maxims of Napoleon was one of the books that she rescued. 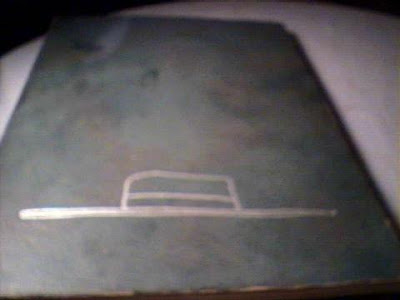 Finally, in September, 2004 the Sentimental Airman acquired an association copy of Folk Tales From Vietnam. This book was formerly owned by General William R. Peers, former Commander of OSS Detachment 101. It was presented to him in 1964 by the officers and men of the 306th Psychological Warfare Battalion. 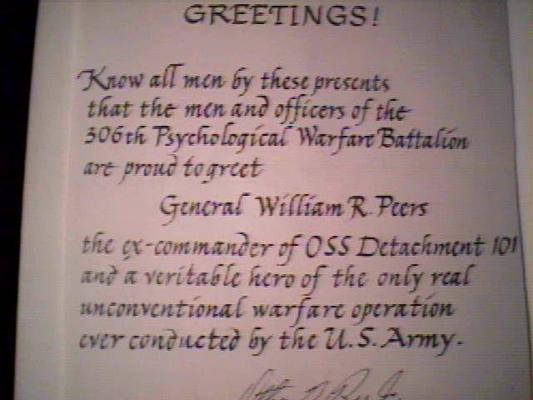 When I think of the OSS, I usually think of Wild Bill Donovan and clandestine operations in Europe; however, Detachment 101 was located in Burma. It was activated in April, 1942 to assist General Stillwell in his operations against the Japanese in China during WWII.  Captain William R. Peers was one of the three original officers of Detachment 101, eventually becoming its commander.

From 1942 to 1945, Detachment 101 performed numerous espionage operations, rescued over 300 downed airmen, and trained over 10,000 Kachin Rangers to conduct guerrilla warfare against the Japanese. Many of these guerrilla warfare tactics were later adopted by the Green Berets. You can read more about Detachment 101 in the book that Peers co-authored in 1963: Behind the Burma Road.

I have to admit that I am curious about the psychic abilities of the men and officers of the 306th Psychological Warfare Battalion. They presented this book, Folk Tales From Vietnam, to General Peers in 1964; yet, Peers, as far as I can tell, had yet to set foot in Vietnam, at least not officially.  General Peers wasn't assigned to Vietnam until March, 1968, at which time he assumed command of the American ground forces in Vietnam. He later returned to Vietnam in November, 1969, to conduct the My Lai Investigation. The My Lai Massacre was no folk tale from Vietnam.  Almost 500 civilian men, women, and children were killed by American soldiers.  The Peers Inquiry, lasted four months, and contained 20,000 pages of testimony from almost 400 witnesses.  In his blistering report, General Peers recommended charges be brought against dozens of officers and enlisted men for murder, rape, and coverup of the massacre.  Several  Americal Division Generals were included in the coverup charges. Only one soldier, Lt. William Calley, was ever convicted of any crime relating to My Lai.

There is another association of historical significance in the provenance of this book. The Sentimental Airman acquired it from a retired Air Force Officer, who, for the purposes of this article, shall be known as THUDRAT.

In 1959, THUDRAT was the Air Force Attache at the United States Embassy in Tehran. He was one of the 52 hostages held captive for 444 days in Iran. To make matters worse, the Ayatollah Khomeini decided to put THUDRAT on trial as a war criminal. The Ayatollah claimed that THUDRAT had bombed civilian targets in Vietnam during the Rolling Thunder Campaign. THUDRAT had flown over 100 Rolling Thunder bombing missions in his F-105 aircraft.

Plans for the trial were cancelled, however, because Vietnam declined to produce any witnesses for the trial. Finally, after 444 days of captivity, on the very day that President Reagan took office, THUDRAT and the other hostages were released. That, to me, is a fitting end to a story that began as a folk tale from Vietnam. 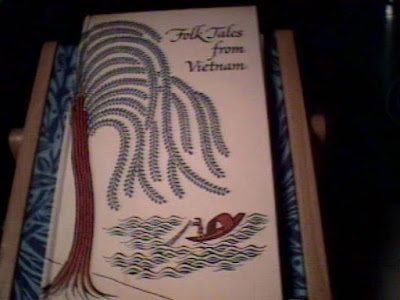 There are many stories surrounding the books in My Sentimental Library. I have covered only the books formerly owned by aviators, military leaders, and one eccentric scientist. I have yet to cover the books formerly owned by authors, actors, book collectors, booksellers, book publishers, and other famous people.  You may, perhaps, read about the rest of My Sentimental Library in future AB Bookman articles.

Because of my recurring heart problems, my doctors placed a twenty-pound lifting limitation on me in 2006.  And I could no longer deliver the mail for the Post Office.  To make ends meet until my disability retirement was approved, I sold a good quantity of my books, including my entire Sentimental Airman Collection.  I am glad to say, however, that I sold my Sentimental Airman Collection en bloc to my bibliophile friend Jan, whose husband Bill was an aviation enthusiast.  I did add one more book to the collection before selling it:  General Pershing's copy of Out of the East by Lafcadio Hearn. 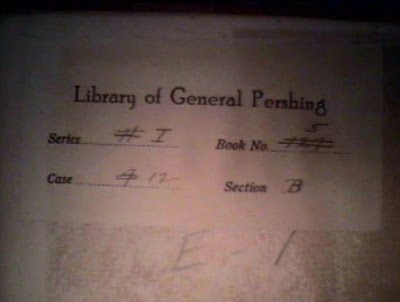 Bill has added a number of books to the collection, but the most important book in the eyes of this sentimental airman is a book from the private library of Orville Wright! 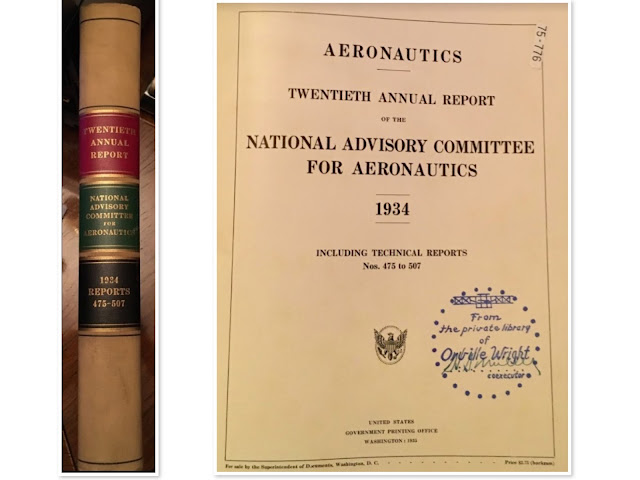 You can still view a portion of The Sentimental Airman article via the Wayback Machine, minus one of the photos.  But now you can view the article on My Sentimental Library blog, along with my posts about books formerly owned by authors, actors, book collectors, booksellers, book publishers, and other famous people.

Posted by Jerry Morris on Monday, February 06, 2017 No comments: