Most authors keep copies of their published books.  Mary Wescott (1889-1955), a librarian at Duke University, was no different. What was different was that her book was composed of six parts,  each of which was published separately in wraps.  The first two parts were published in 1932, the third in 1933, the fourth in 1936, and the fifth and sixth in 1937.  There were 1145 pages running consecutively in all.  When the book was finally completed, her six parts were bound in two volumes. And Mary Wescott signed her name on the front free endpapers of both volumes. 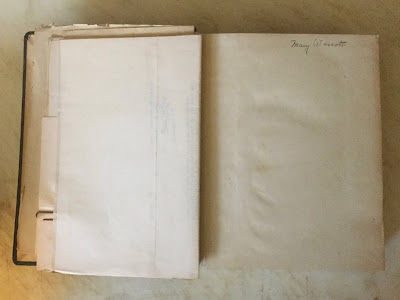 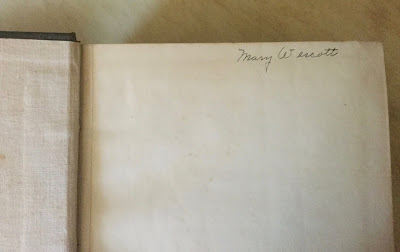 The first volume served as Mary Wescott's Atta-Girl Book.   Inserted in the front of the book were thank-you letters from other librarians across the country––and even one from a librarian in England!   These librarians thanked her  and her co-compiler, Allene Ramage, for sending copies of the checklist to their libraries.  Moreover, the letters included praise for their bibliographical contributions. 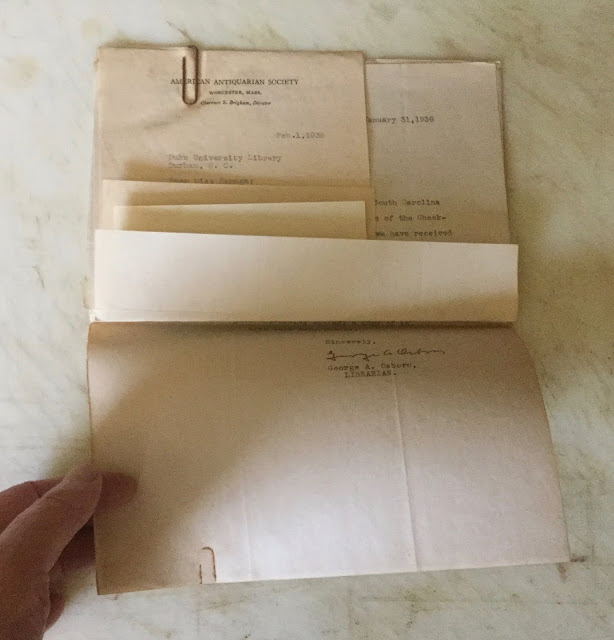 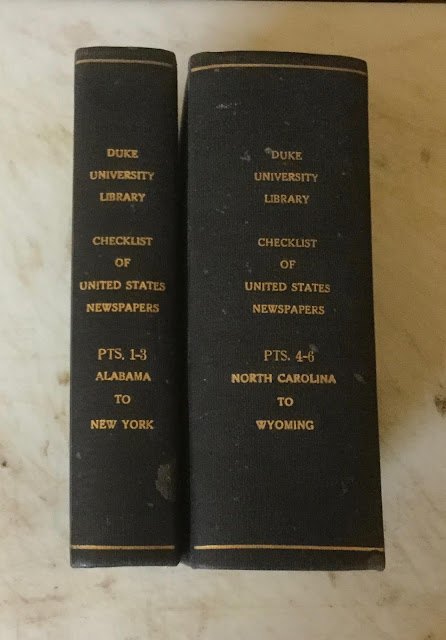 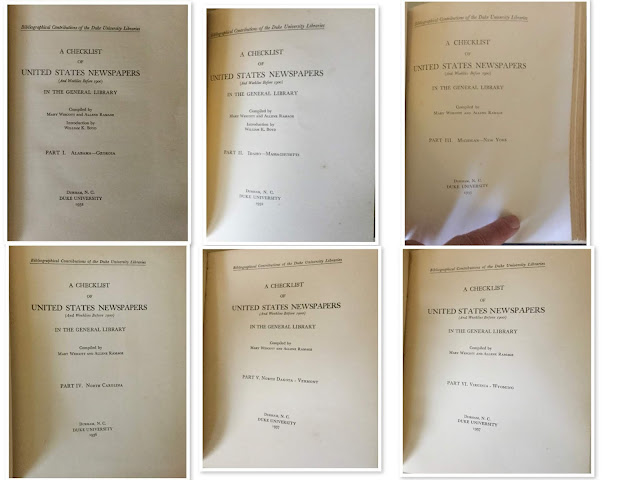 Mary Wescott enticed William K. Boyd (1879-1938), the Library Director of Duke University Libraries, to write the Introduction to the book (Boyd was a noted historian of the South, particularly of the history of North Carolina). 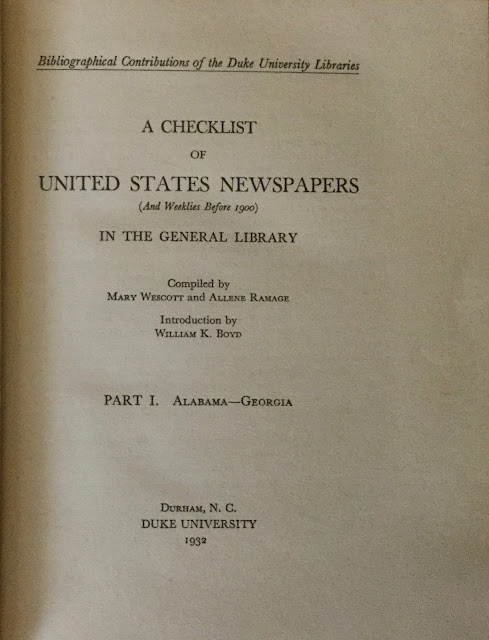 Mary Wescott sent Boyd the first section of the checklist to review.  She also sent him a poem that best described their work in compiling the checklist. 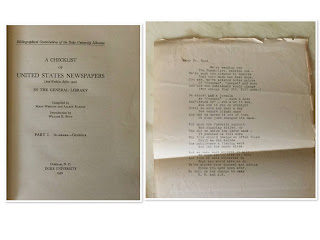 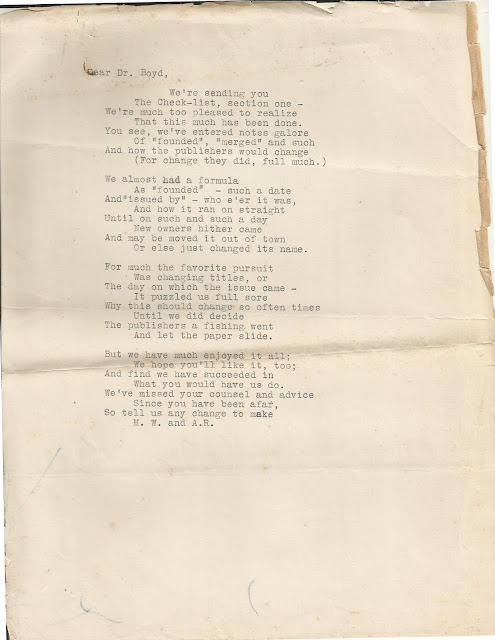 Then she sent Boyd a second letter (the real letter) asking him to write the Introduction: 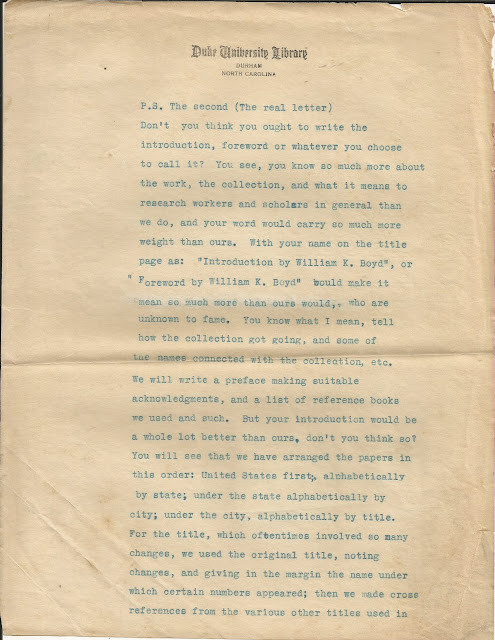 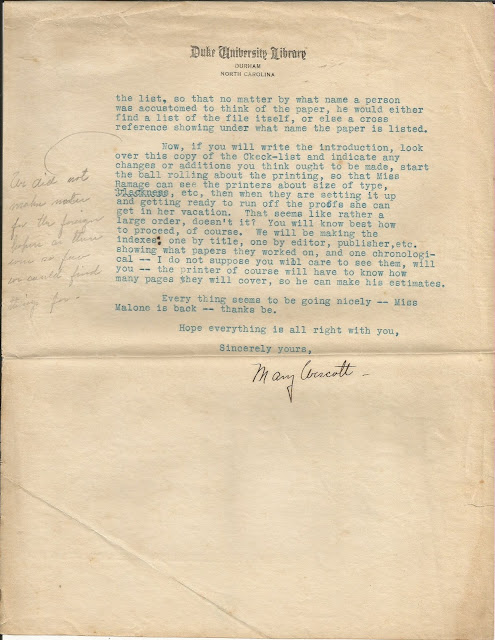 In pencil in the margin, Mary Wescott wrote, "We did not make notes for the foreign papers as there were so few of them we could find things for."   Allene Ramage would later compile A Checklist of Foreign Newspapers in the Duke University Library, which was published separately in 1949.

As promised in her letter to Boyd,  Mary Wescott provided him with acknowledgements for the work completed on compiling the checklists.  I suspect she was primarily responsible for the wording of the acknowledgements in the second paragraph of Boyd's Introduction:


The collation and classification has been entirely in the charge of Miss Allene Ramage; but, for the general plan of the Checklist, particularly in matters of arrangement, credit must be extended to Miss Mary Wescott.  Miss Eva E. Malone, head Cataloguer of the General Library, has given assistance at critical points in the venture.  Misses George Lee Garner and Ruth Ketring, assistants to Miss Ramage, displayed meticulous care and accuracy in carrying out details relating to collation and revision.

There were seven letters from other librarians that Mary Wescott kept in the front of her Atta-Girl Book.  The first letter was from Clarence S. Brigham (1877-1963), librarian and director of the American Antiquarian Society. 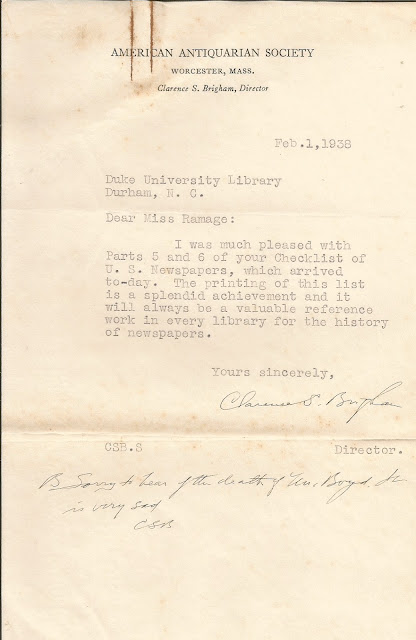 Brigham's Bibliography of American Newspapers 1690-1820  in Proceedings of the American Antiquarian Society 1913-25 proved useful to the Duke University compilers in researching newspapers published before 1820.  Brigham's work was later published as a separate work in 1947 (Brigham's note on the bottom refers to the death of William K. Boyd on Jan. 19, 1938).

If praise from Clarence S. Brigham wasn't enough, the next letter was from the scholar, editor, collector, and librarian, Esmond Samuel de Beer (1895-1990). 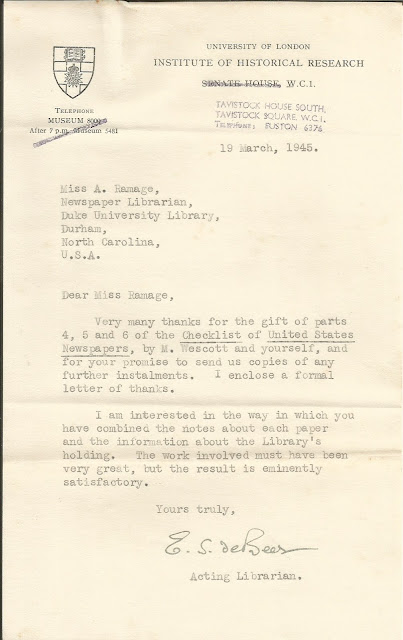 De Beer is best remembered for his Clarendon Press editions of The Diary of John Evelyn and The Correspondence of John Locke. 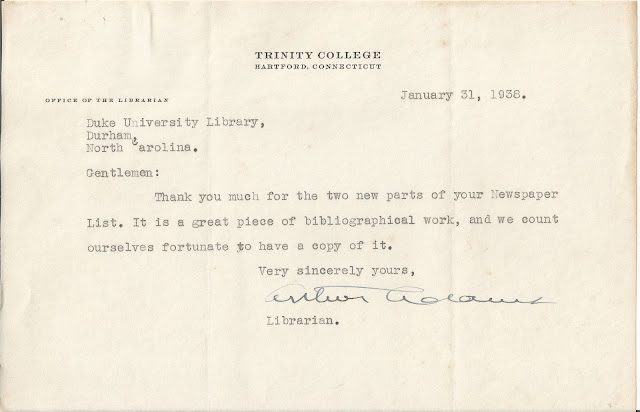 The Trinity College librarian, Arthur Adams (1881-1960) was noted for his genealogy work in the research of his Adams ancestors.  He should also be noted for stretching his last name as far across the page as possible. 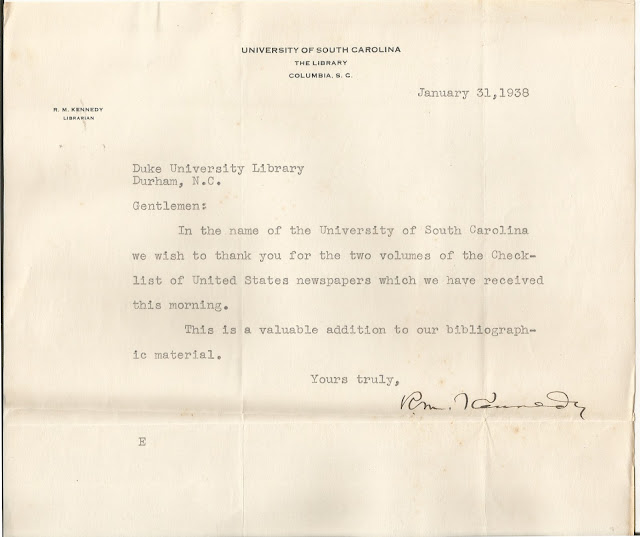 Robert M. Kennedy (1866-1948) helped form the South Carolina Library Association in 1915, and was instrumental in the formation of public libraries at the local level. 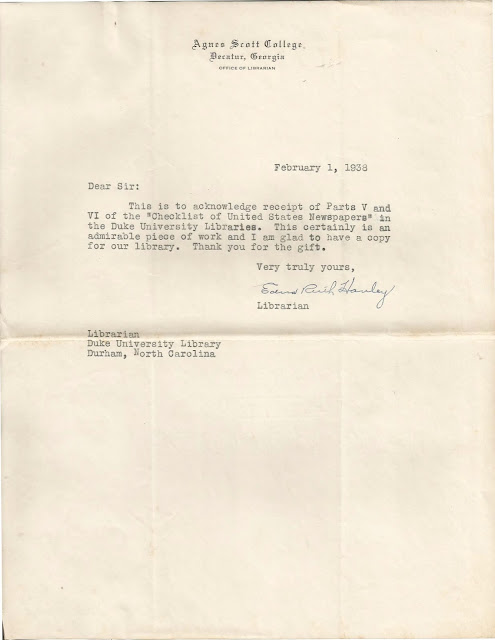 Edna Ruth Hanley (1900-1972) is the author of College and University Library Buildings, an annotated bibliography of libraries built from 1917 to 1938. 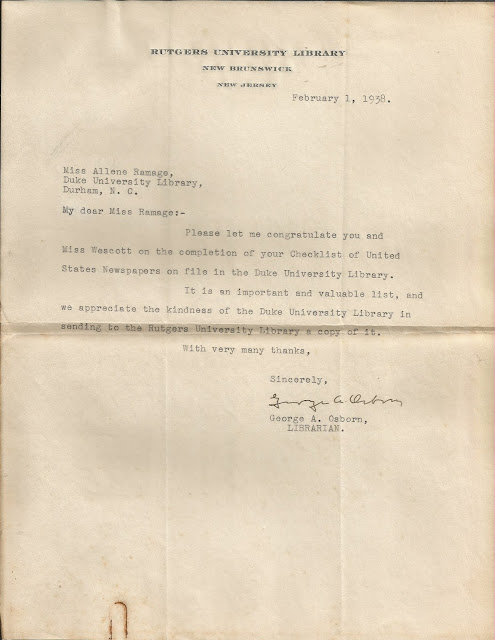 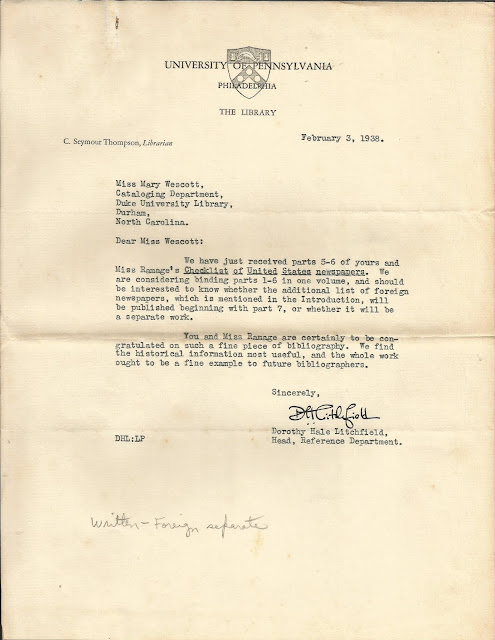 Dorothy Hale Litchfield (1902-2001) was the editor of Classified List of 4800 Serials Currently Received in the Libraries of the University of Pennsylvania and of Bryn Mawr, Haverford, and Swarthmore Colleges.

Mary Wescott, whose 1914 portrait is above, graduated from Duke University in 1914, and then worked as a teacher and librarian at Carolina College.   She began working at Duke University Library in 1920, and retired in 1954.  She died in her sleep of suspected coronary occlusion on July 6, 1955. 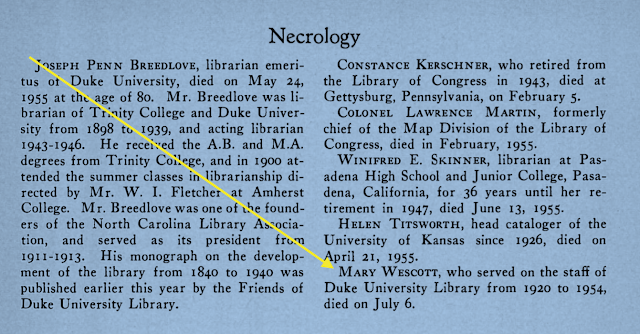 Mary Wescott's  Atta-Girl Book made its way to a bookseller in Pensacola, and then recently to me.