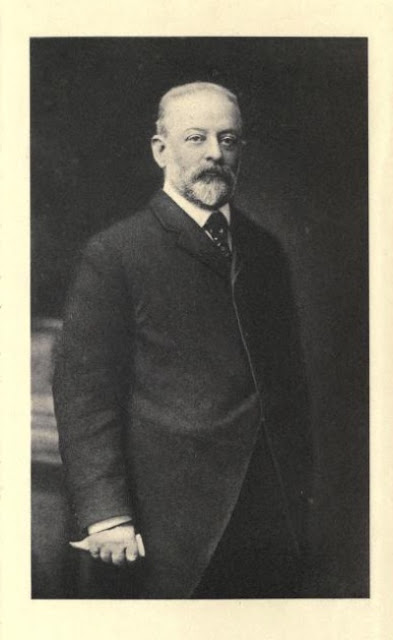 I plead guilty to the charge of being a dreary old fool over books, but chiefly old books, for they have a settled and permanent character which no one may impeach. We may be tolerably sure about them; they are generally what they seem to be, with their broad margins, their solid, substantial type, and their charming air of dignity. Most of the books of our day are unworthy of absolute confidence, and their paper, their binding, and their typography are a source of grief to the judicious. The man whose literary pabulum is sufficiently supplied by his daily newspaper may ask why an old book, with its aged and decayed covers, is better than a new one with that outward adornment of gilt which some publishers delight to lavish upon us. The sagacious Dofob will not undertake the task of breaking his way into the solid density of such a mind or of explaining to him the reason, for the game is not worth the candle....
Adrian H. Joline
The Deliberations of a Dofob
From: At the Library Table, 1910


Here are some reviews of At the Library Table: 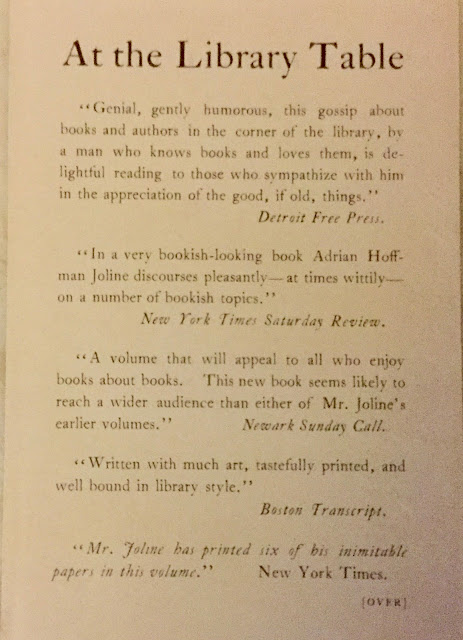 You will not find Adrian H. Joline or his book, At the Library Table, listed in Winslow L. Webber's 1937 bio-bibliography, Books about Books, or in Carl L. Cannon's 1941 book, American Book Collectors and Collecting.  Nor will you find The Diversions of a Book-Lover, Joline's best book about books, listed in Webber or Cannon either.  It may very well be that Adrian H. Joline's reputation as an autograph collector completely overshadowed his reputation as a book collector.   Joline had an extensive autograph collection that was second to none.  He had complete sets of the autographs of the Signers of the Declaration of Independence, the Presidents, Vice Presidents,  Secretaries of State, Secretaries of War and more.  Moreover, he wrote books about autograph collecting, and wrote a column for Walter R. Benjamin's periodical on autograph collecting, The Collector.

The late Donald C. Dickinson recognized Adrian H. Joline's significance as a book collector  and included him in his 1986 book, Dictionary of American Book Collectors.  And Dickinson listed The Diversions of a Book-Lover and At the Library Table as two of the three sources for his bibliography, the other source being Meditations of an Autograph Collector, also by Joline. 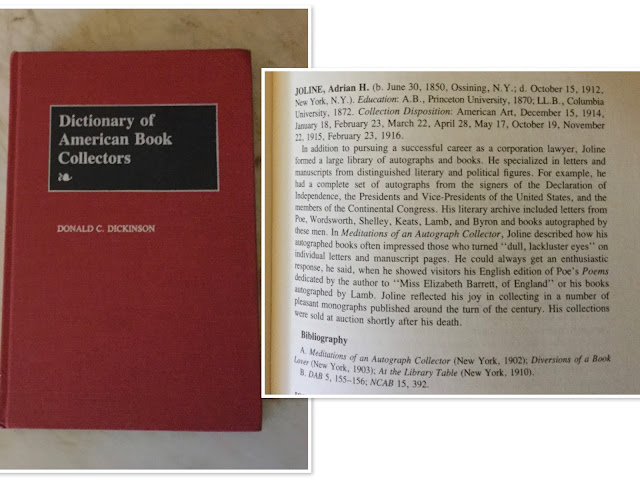 Adrian H. Joline (1850-1912) graduated from the College of New Jersey, Princeton, in 1870 and Columbia Law School in 1872, and was active in both alumni organizations (Joline Hall, a dormitory at Princeton, was named after him).   It is said that Joline died of sheer exhaustion on Oct, 15, 1912, mostly from overwork as Receiver of the Metropolitan Street Railways.  According to Prabook.com, at the time of his death, Joline was senior partner of the firm of Joline, Rathbone & Larkin, and director of the following railway and insurance companies: Albany & Susquehana Railroad Company, American & Foreign Marine Insurance Company, National Surety Company,  and United Traction & Electric Company.  He was also the director of the Chatham-Phenix National Bank and the Receiver of the Metropolitan Street Railways.

Adrian H. Joline was a member of the Grolier Club of New York, the Bibliophile Society of Boston, and the Caxton Club of Chicago.  He was also a member of the Society of the Dofobs of Chicago.  Yes, the Dofobs were real!  The acronym reportedly stands for Damned Old Fools Over Books.  But if one chooses, the first word can be replaced with Darned or Dreary.   Joline's essay, "Deliberations of a Dofob," was first published in The Second Book of the Dofobs in 1909.  Only 50 copies were printed.  And I do not have a copy. 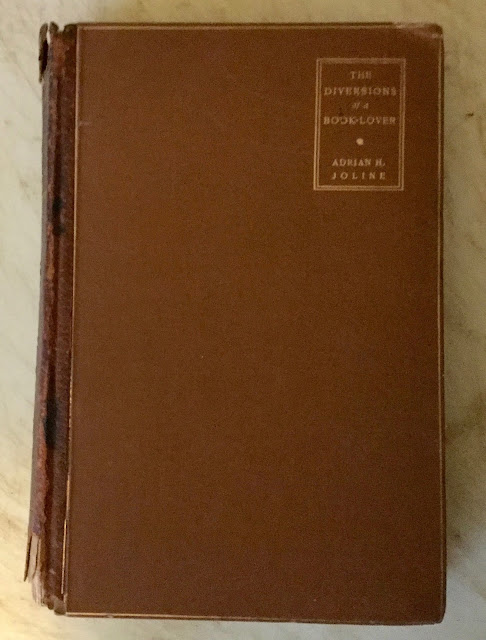 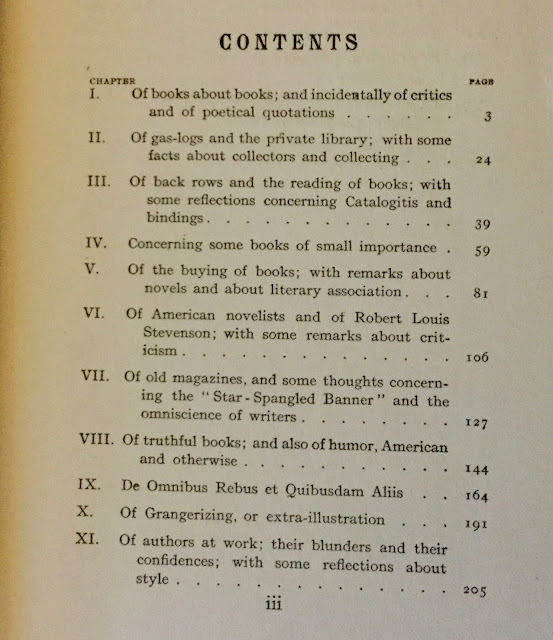 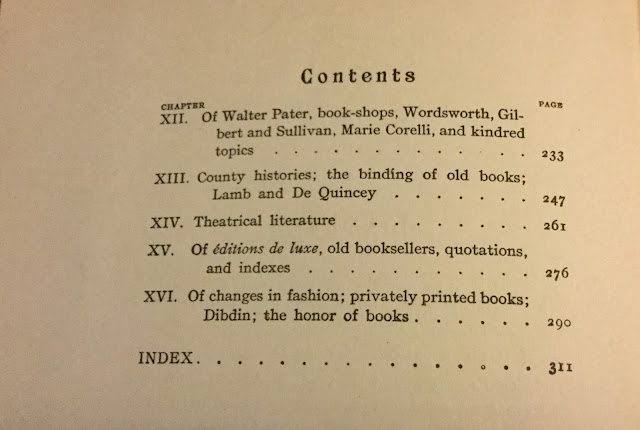 His next book, The Book Collector and Other Papers was privately printed in 1904 in an edition of 150 copies.  And as Joline mentioned in the Preforatory Note, he wrote the papers for his friends: 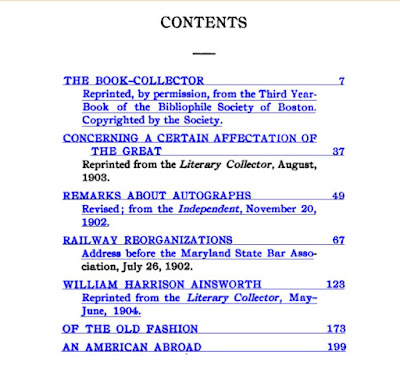 Technically, I don't consider this book to be a book about books because the first paper is the only essay that is related to book collecting.  I also have a copy of the Third Year Book of the Bibliophile Society of Boston in which that essay first appeared.  An excellent essay it is!

Joline himself leveled aspersions on his choice of title for his 1907 book, The Autograph Hunter and Other Papers: 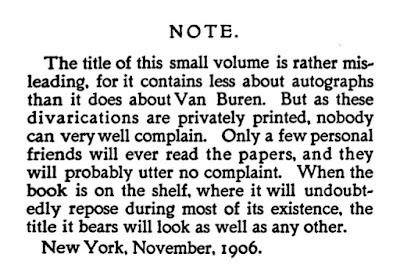 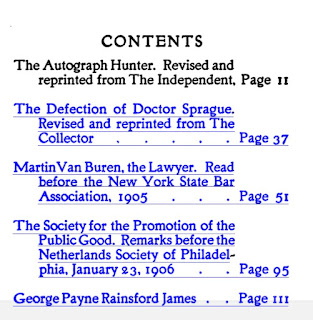 Joline's friend, the renowned jurist John H. Dillon (1831-1914) was responsible for the inclusion of the paper on George Payne Rainsford James in this book.  In the latter part of 1906, Joline had thirty copies of the James essay printed, and presented  Copy No. 18 to Dillon.  Pasted in the book is Joline's A.L.S. to Dillon, as well as a copy of Dillon's response to Joline. 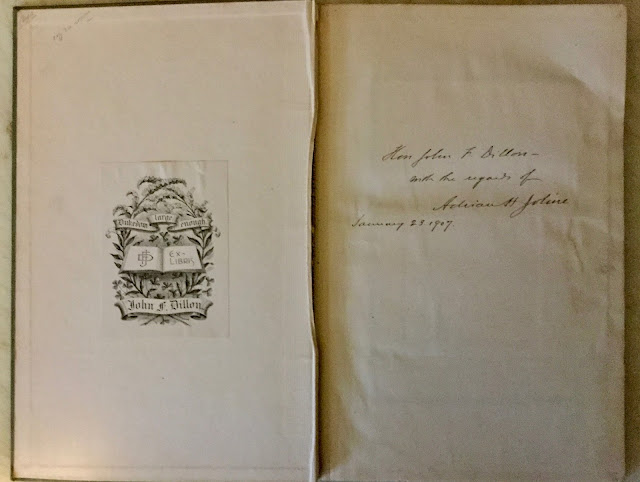 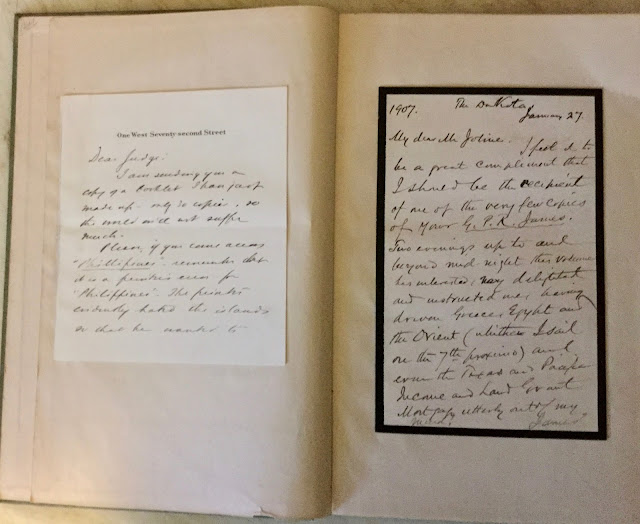 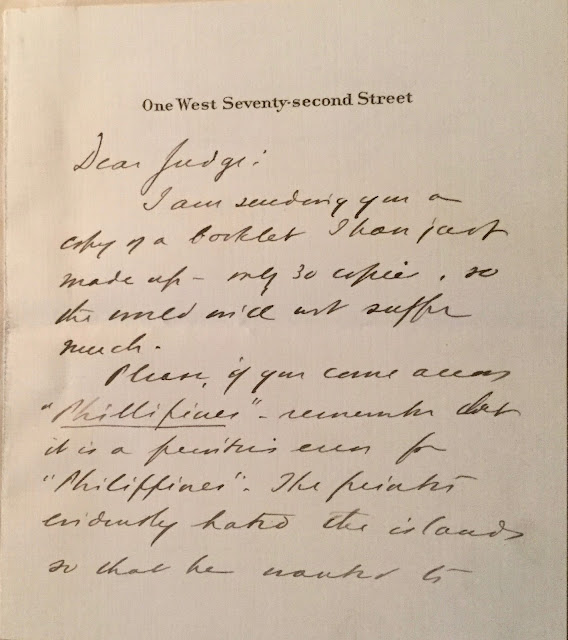 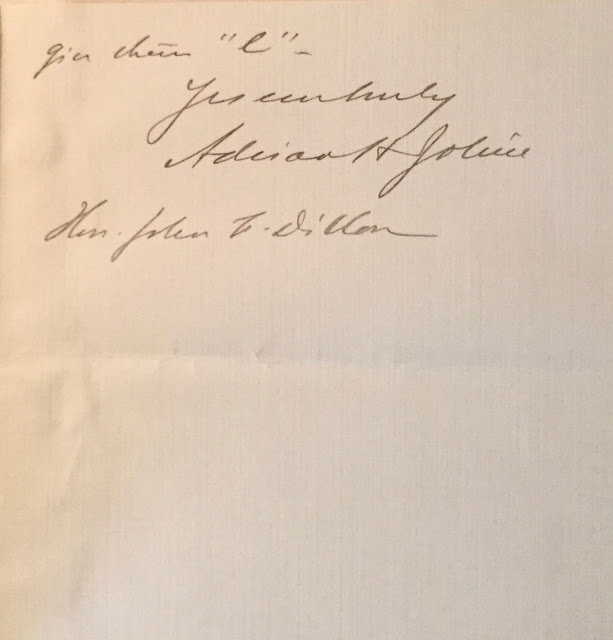 In his response, Dillon wrote:


I have a book-lover's fondness for a scarce or rare volume (one of thirty for example), but still I am sorry that your delightful book is not regularly published so that the many might enjoy it as well as the few fortunate and favored dozens of the author. 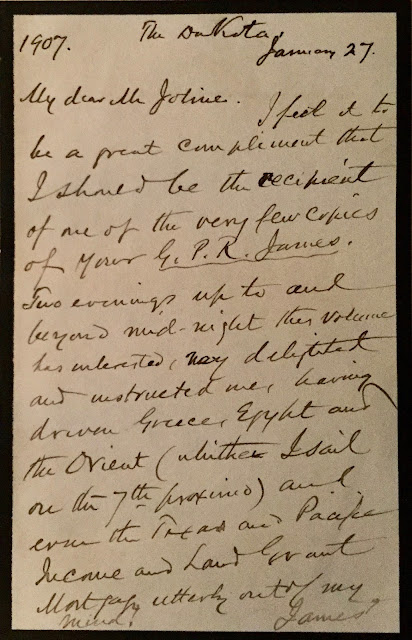 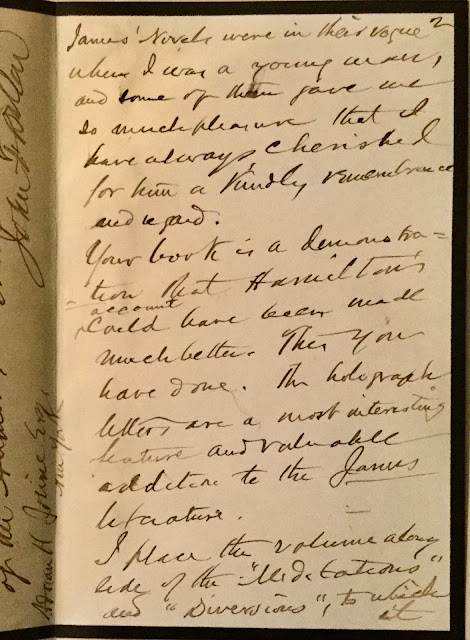 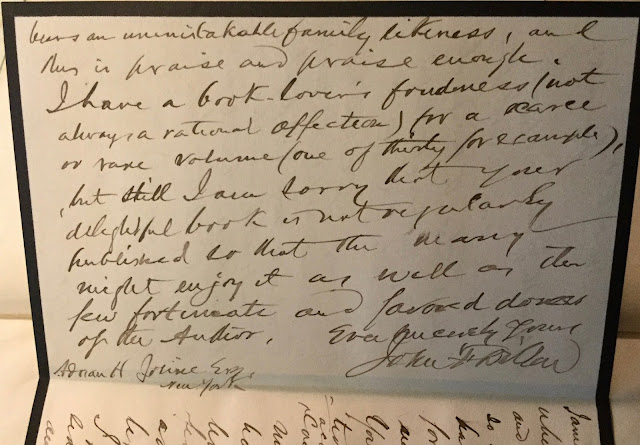 I have a rather humorous footnote to add regarding the purchase of this book.  I acquired it on eBay,  and the seller wrote that one of the letters was from George Payne Rainsford James.  That would have been "heavenly," especially since James died forty-six and a half years before the letter was written!

Next up is Joline's 1910 book, At the Library Table.  I acquired my copy at Larry McMurtry's book town, Archer City, in June 2011. 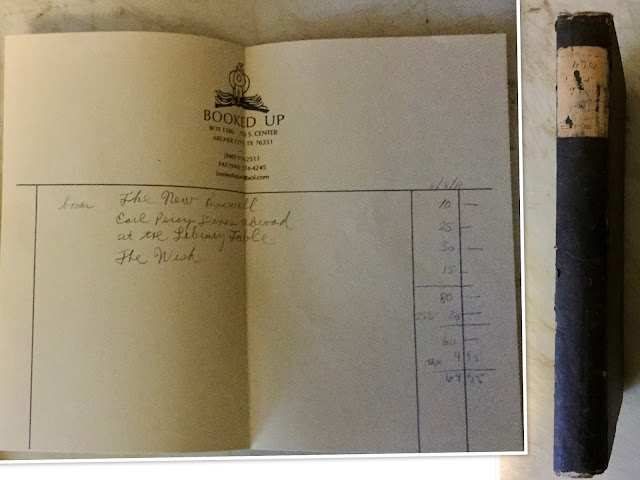 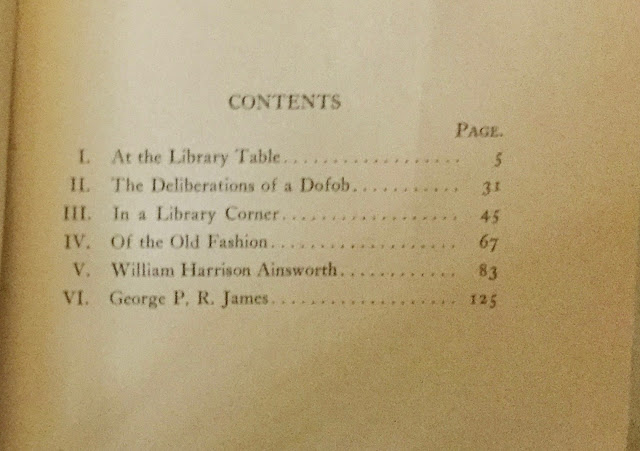 Adrian H. Joline presented this copy to Joseph M Andreini, a member of the Grolier Club, the American Bookplate Society, and the Collectors' Club (stamp collecting). 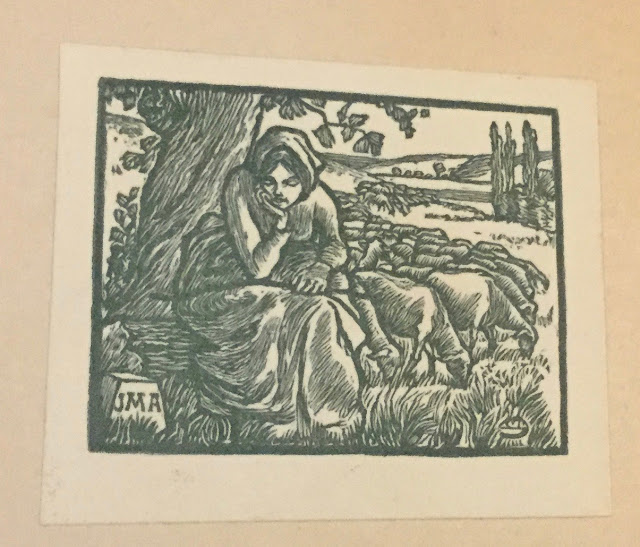 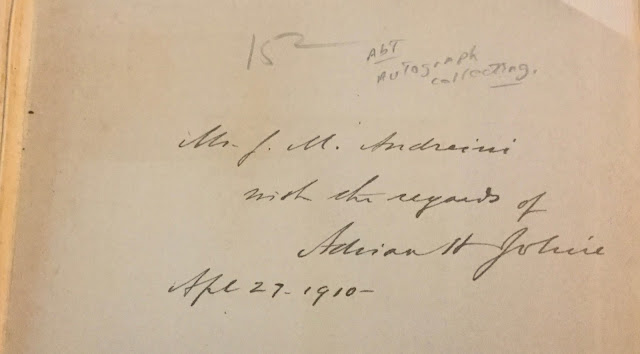 Above Joline's inscription,  a former owner – definitely not Andreini or McMurtry – wrote that the book At the Library Table was "Abt Autograph Collecting!"

Andreini had a high respect for Joline, and in the book, Adreini inserted an advert from George D. Smith about the book;  a clipping about Joline from a May 1911 issue of the periodical, The Smart Set; an unidentified clipping of a portrait of Ainsworth; and an obituary notice from the Oct 16, 1912 issue of the New York Herald.  I call attention to the newspaper headline of the obit: ADRIAN H. JOLINE, LAWYER, IS DEAD:  His Health Shattered by Excessive Work as Receiver of Metropolitian Street Railways: 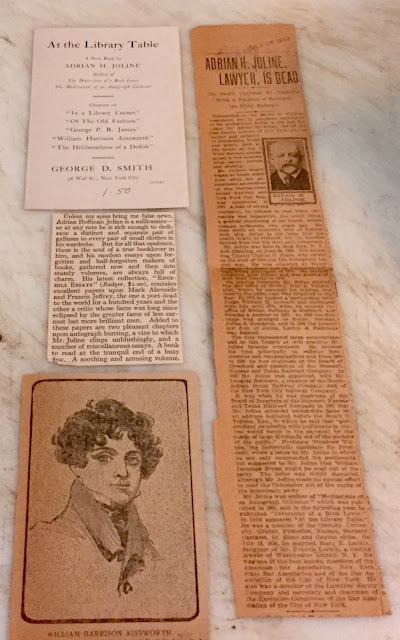 Two of Joline's books were printed in 1911, Peapack Papers and Edgehill Essays.  Currently, there is only one copy of the first edition of Peapack Papers  listed on the web, but it is too rich for me at $150.   I did, however read the book online at archive.org .  The chapters on trifles, collecting of books, and reading are right up my alley, while the very last chapter in the book provides an insight into Joline's frustrations as Receiver of Metropolitan Street Railways. 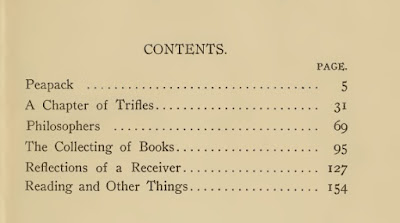