I was doing phrase searches on eBay while hunkered down in my library the other day.  And one of the results for "catalogue of the library of" was "Joseph Sabin/Catalogue of the Library of a Collector and Amateur..." I'm a Joseph Sabin fan, so the listing had my interest.  Not mentioning the name of the "collector and amateur" perked my interest even further, so I clicked on the auction, and liked what I saw.  Here's the title page of the book: 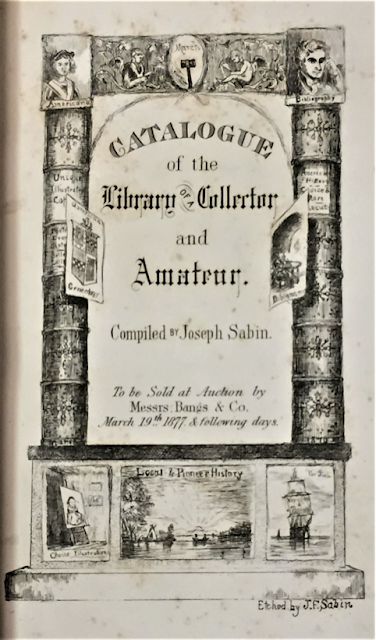 The collector/amateur is not identified on the title page. And nowhere in the written portion of the eBay listing did the seller identify the name of the collector. But the words "Hoffmann Catalogue" were stamped on the title label on the spine.

The seller described the condition of the book as "in fair to good condition," and mentioned that it had marbled endpapers.  Even better, he wrote that prices realized were noted for each auction.  He originally had the auction listed for $125 or Best Offer, but had reduced it 30% to $87. 50.  Unless it was a collectible auction catalogue, the price seemed unusually high to me, but then, it had the prices realized, which you don't often find in an auction catalogue.  The catalogue, however, was dated 1877, so that information definitely wouldn't help in determining the current value of books.  But I thought it would be fun to see how much the books sold for at that time.  A book that sold for $1 in 1877 would sell for a little less than $25 at today's prices.

I wanted to find out who Hoffmann was so I grabbed two reference books from my bookshelves. There wasn't a collector by that name in Dickinson's Dictionary of American Book Collectors.  Cannon didn't write about him either, but listed a "Hoffman Sale" in his index of American Book Collectors.  The Hoffman Sale took place in 1877.  Cannon probably figured that readers in the 1940s would know who Hoffman was, but here it is eighty years later, and I still had no clue who Hoffman was, or if he really was an amateur for that matter.  And yes, the collector's name was misspelled on the title block on the spine.

I searched the book search engines for "Catalogue of the Library of a Collector and Amateur," and learned that the collector's name was Francis Suydam Hoffman (1828-1886).   Reading that name, as I realized later, should have rang a few bells, but I still had no memory of him.

While on AbeBooks, I found a listing of the book that was a carbon copy of the eBay listing.  Further research revealed that it was the eBay seller's very own AbeBooks listing.  He had the book listed for $115 on AbeBooks.  Another contemporary copy of the book  on AbeBooks was listed for $24.75,  and was "in acceptable condition" with both boards missing and heavy wear to the backstrip,  while another copy with the spine darkened and hinges slightly starting was considered to be "in good condition" and priced at $180.

I did a quick Google search of "Francis Suydam Hoffman" and learned that he edited a book on Benedict Arnold's court martial, was the author of a poem about General McClellan, and commissioned a memorial medal of Washington Irving, which he gave to Henry Wadsworth Longfellow.

I  then googled "Catalogue of the Library of a Collector and Amateur" and found a PBA Galleries auction dated 06/02/2016 of what appeared to be the very same copy of the book.  The auction estimate was $300 to $500.  The book sold for $192 with the buyers 20% premium included, so the hammer price was $160.  I had to read the wording of the book's condition twice and then verify that I was actually reading a PBA Galleries listing and not an eBay listing.  The auction cataloguer described the book's condition as follows: "Wear and rubbing to leather and boards; some pencil and pen notes on front endpapers, front hinge cracked, scattered light foxing; very good."  In this instance, "very good," was even worse than saying, "all else fine."

Next, I located the book on the Haithi Trust Digital Library and browsed it to verify that the catalogue was to my liking.  It was. Hoffman's library was rich in Americana, but also had quite a bit of works by English and American authors whom I collected, including a substantial Dibdin Collection.  I still didn't know enough about Francis Suydam Hoffman, but he impressed me.

But I was still wary of the book's condition. In his two listings, the eBay seller did not mention anything about the hinges, so I offered him $75 for the book.  He accepted, and the book was mine!

The first thing I did when I received the book was to check the front hinge. At first glance it looked like a former owner had repaired it.  Either that, or  it wasn't the same book that appeared in the PBA Galleries auction.  However, when I inspected the book more closely, I realized that all a former owner did was to glue 1/4 inch of the front endpaper on to the text block itself, thus sealing the hinge.  The endpaper was already splitting at its new crease, so I mended it with transparent mending tape, only the mending tape is not transparent on marbled endpaper.... 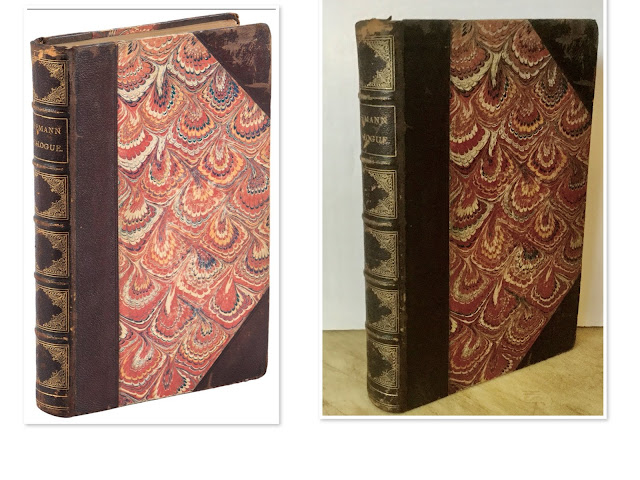 The next thing I wanted to do was to find out more about Francis Suydam Hoffman.  I did a more intensive google search, and learned that he was a lawyer who resided in Pleasant Valley, New York, and was a coin collector as well as a book collector.  I then found his name on a Grolier Club Online Exhibitions page.  The page was about the 1809 edition of Dibdin's Bibliomania.

The last paragraph of the page provided helpful information about Hoffman:


A reprint of the 1809 edition, this is the one –– and only –– publication issued by the obscure Club of Odd Sticks, founded in New York in 1864 by Americana collector Francis Suydam Hoffman....


I now knew where to go for information about Hoffman's interests in books: to Adolf Growoll's American Book Clubs! 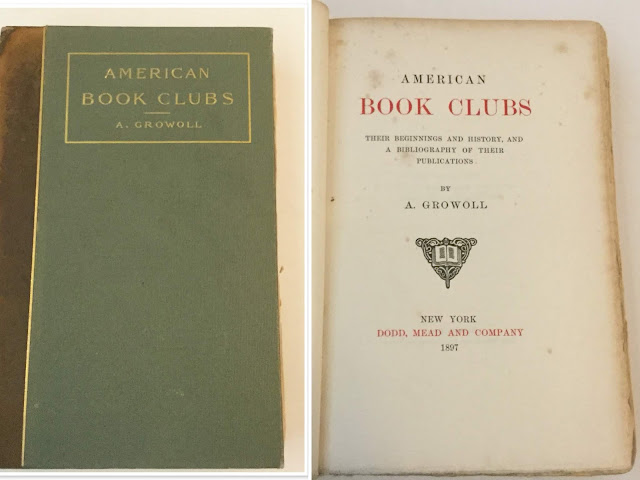 Hoffman had copies of many, if not all, of the books that the Bradstreet Press published for the various book clubs.  He had three copies of the Club of Odd Sticks edition of Bibliomania, including one that Sabin identifies as a unique copy: "the only copy printed in this size." Since 40 copies were printed in quarto, and 57 copies were printed in royal octavo, I suspect that the unique copy was a folio.  It sold for $18, the equivalent of $450 today.  The 1809 edition of Bibliomania went for $7.25 ($181.25).  In all, Hoffman had 32 copies of works by Dibdin.  Both A Bibliographical, Antiquarian, and Picturesque Tour in France and Germany and A Bibliographical, Antiquarian, and Picturesque Tour in the Northern Counties of England, and in Scotland sold for $26 each ($650).

Americana, including works about Indians, was quite popular at the Hoffman auction.  A 1677 narrative by William Hubbard about the troubles with Indians in New England sold for $100 ($2500), as did J. Lawson's A New Voyage to Carolina..., which was published in London in 1709.  The best seller of the auction was John Smith's 1632 edition of The Generall Historie of Virginia, New-England, and the Summer Isles..., which sold for $160 ($4,000).

Joseph Sabin actually wrote a two-page preface for the Catalogue of the Library of a Collector and Amateur. And Hoffman is not mentioned by name in the preface either.  This preface is not present in the Harvard, Cornell, or University of Michigan copies displayed on the Haithi Trust Digital Library. The only Haithi Trust copy that had the preface was the NYPL copy.  In fact, my copy is the most complete of all five copies. 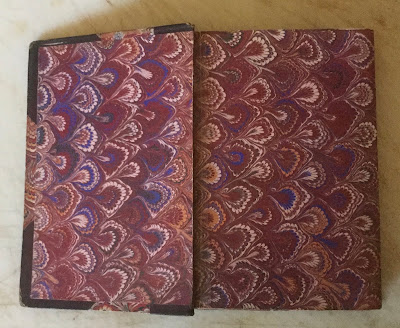 My copy contains a variant Catalogue Notice.  The Harvard and Cornell copies are the only copies that have this notice. 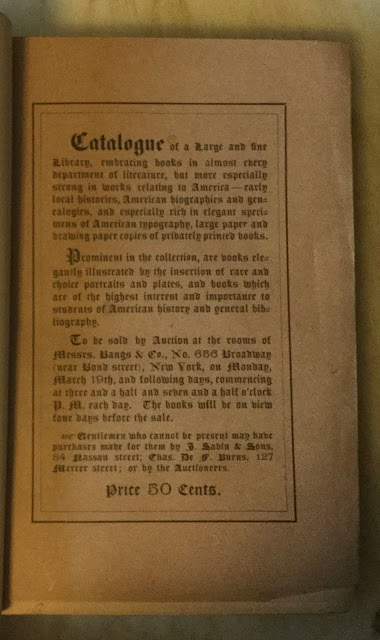 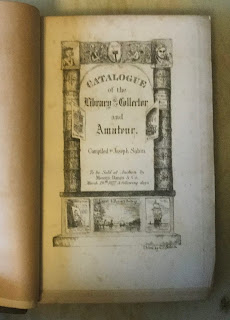 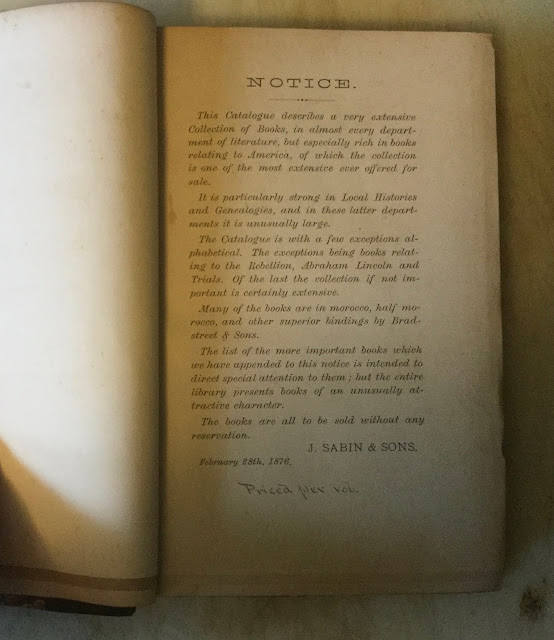 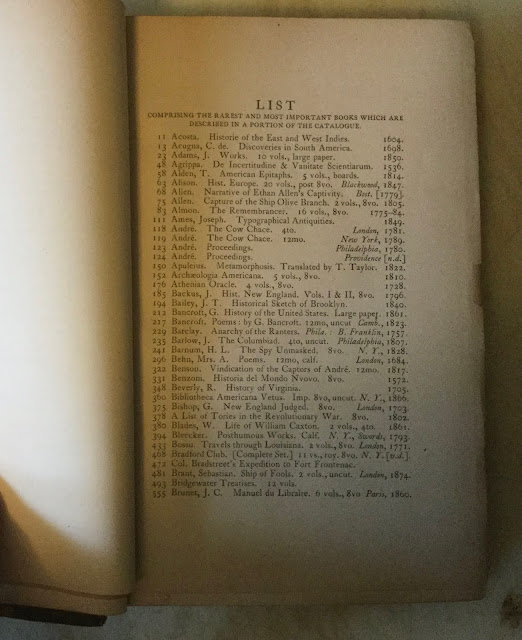 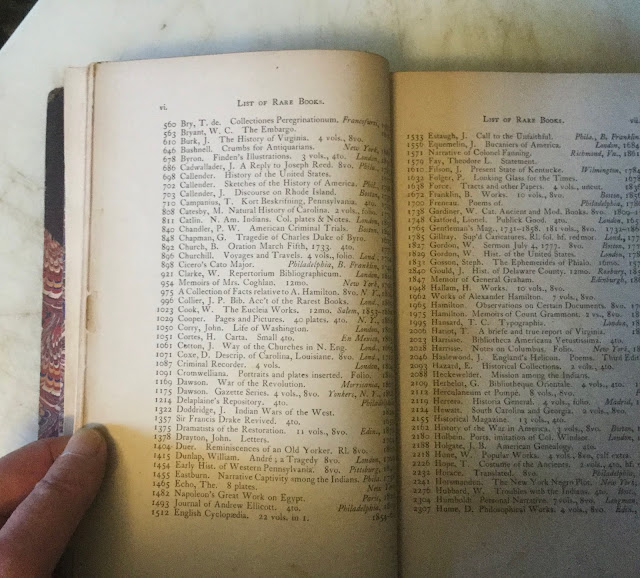 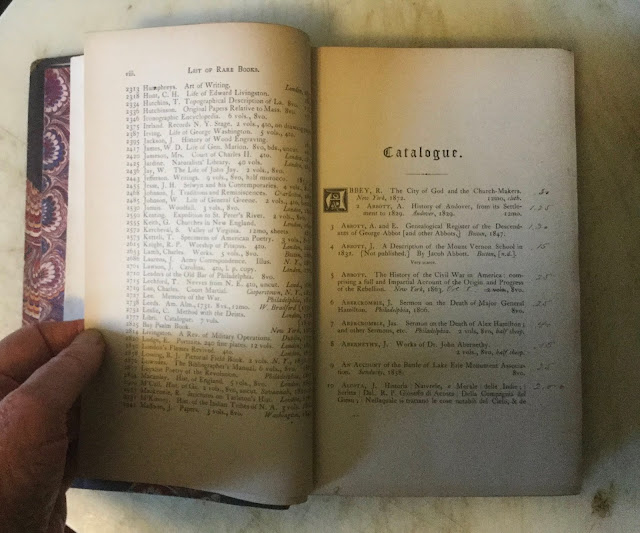 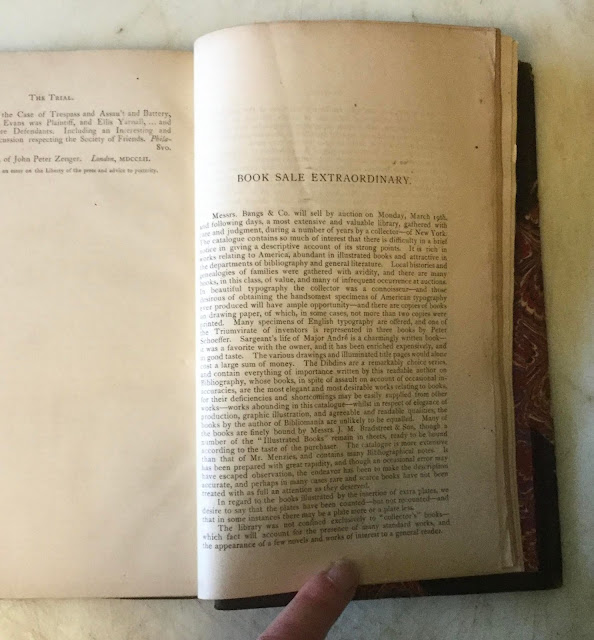 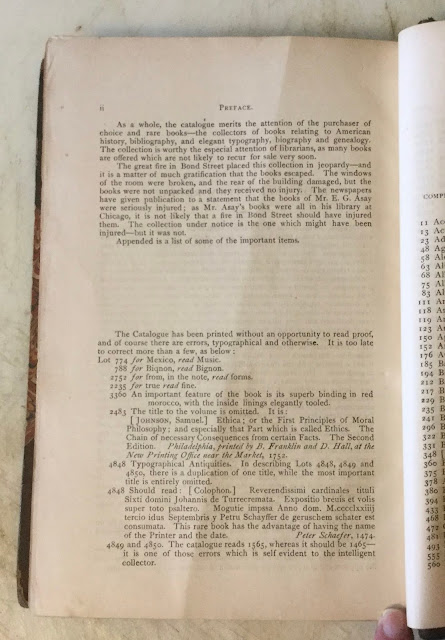 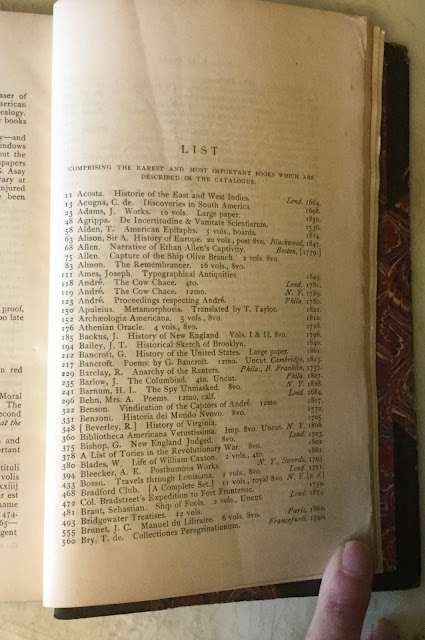 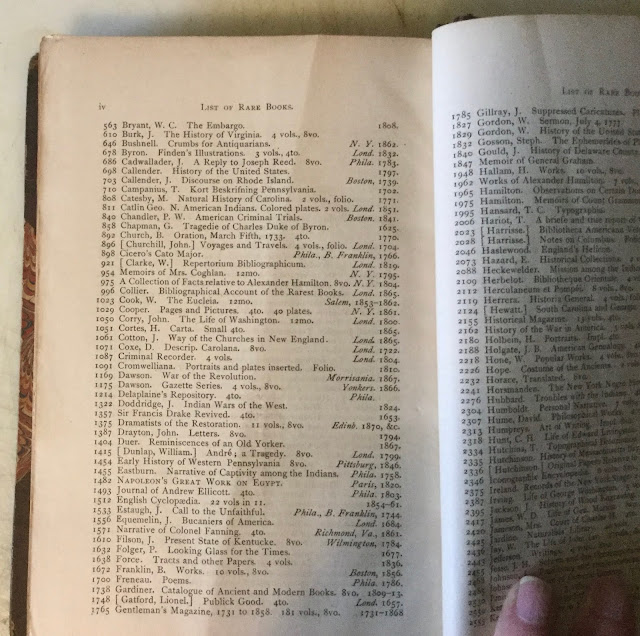 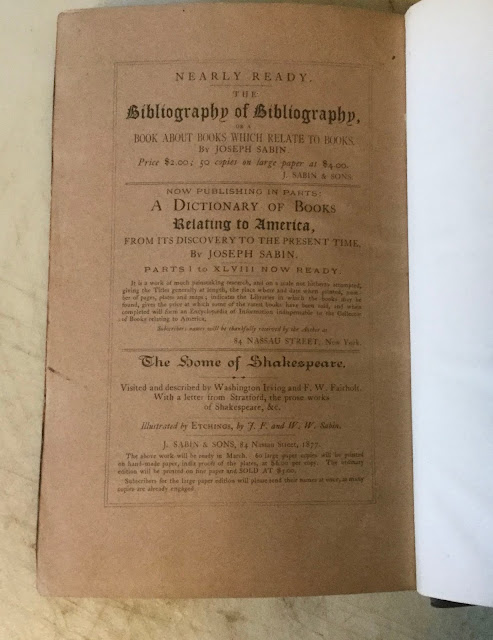 There is provenance information written on the front free endpapers.  The book collector Isaac Dayton was a former owner of this catalogue,  The American author George Macdonald Major acquired this catalogue at the sale of Dayton's library on April 8, 1902.  An unidentified former owner (of Fulton St) acquired it on March 3, 1921 for two dollars. 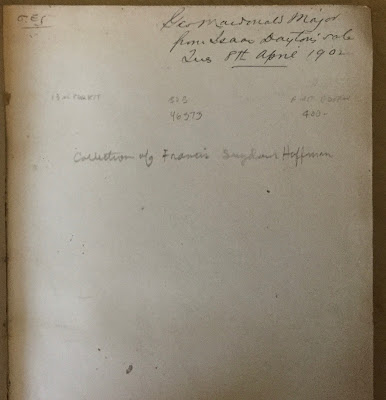 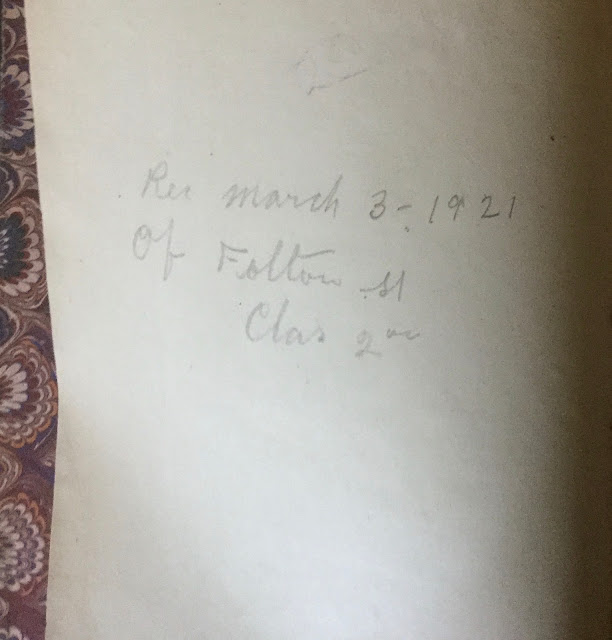 This copy of a Catalogue of the Library of a Collector and  Amateur is now in My Sentimental Library.