The Story
of
Spence's Anecdotes 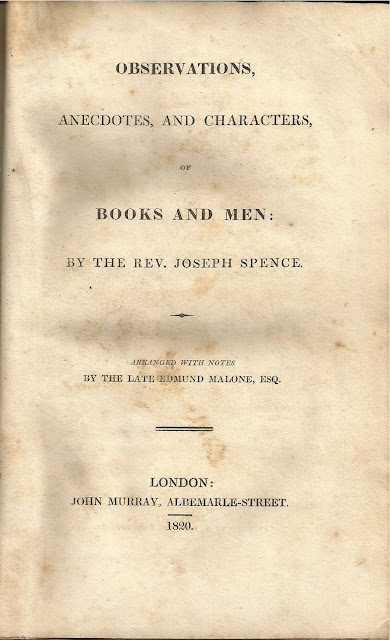 Spence's Anecdotes is comprised of three sections: 78 pages of Popiana, 110 pages on English Poets and Prose Writers, and 109 pages of miscellaneous articles.
The anecdotes about Alexander Pope provide a behind-the-scene look into Pope's life, his writings, and his dealings with other writers.
In the second section,  Spence provides anecdotes or observations on many of the poets that are included in Johnson's Poets as well as anecdotes on some prose writers:  Beaumont, Fletcher, Milton, Waller, Cowley, Denham, Stanley, Otway, Butler, Lee, Rochester, Dorset, Shadwell, Settle, Sprat, Etheridge, Wycherly, Sheffield, Hughes, Fenton, Parnell, Gay, Garth, Congreve, Vanbrugh, Farquhar, Rowe, Young, Addison, Philips, Bacon, Newton, Locke, Marborough, Bolingbroke, Oxford, Atterbury, and more.
In the third section, Spence touches on everything from Virgil to Dante to Oliver Cromwell. Included in this section are nine pages on China and the Chinese, beginning with the emperor Chi Hoangt, who began his reign 246 years before the birth of Christ. Of special note, and worth researching are the anecdotes of Monsignor Fauquet (Bishop of Eleutheropolis, then (1732) residing in the College de Propaganda Fide, at Rome), who spent twenty years in China as a missionary. Fauquet spoke in depth of the sacred writings of China and how closely related they were to the writings of the Christian religions. He brought almost 4000 books out of China, lost half of them on the way, and planned to publish several of them. In an editor's note, Malone reveals that he acquired the list of books Fauquet planned to publish from his friend Chevalier.
All told, this is one awesome book, and for only $5.00 on eBay!

I was browsing Henry G. Bohn's revised edition of The Bibliographer's Manual of English Literature one day—just to see what it had to say about some of my books—and  when I came to Bohn's listing of Spence's Anecdotes, I did a double take! 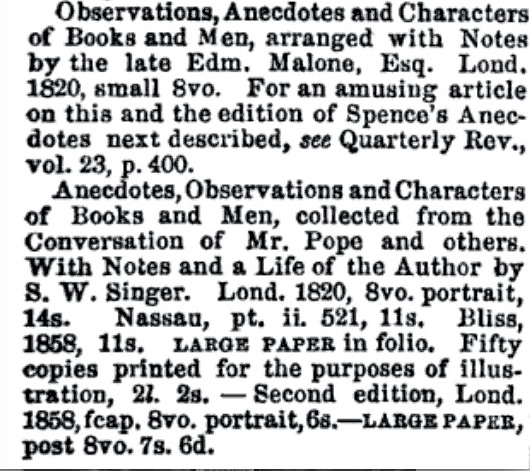 Henry Bohn listed two editions of Spence's Anecdotes!  And with differently-worded titles. And both editions were published in 1820?   That had to be a mistake!

But when I read the article Bohn cited in the Quarterly Review, I discovered that not only were both editions published in the same year, they were published on the same day! 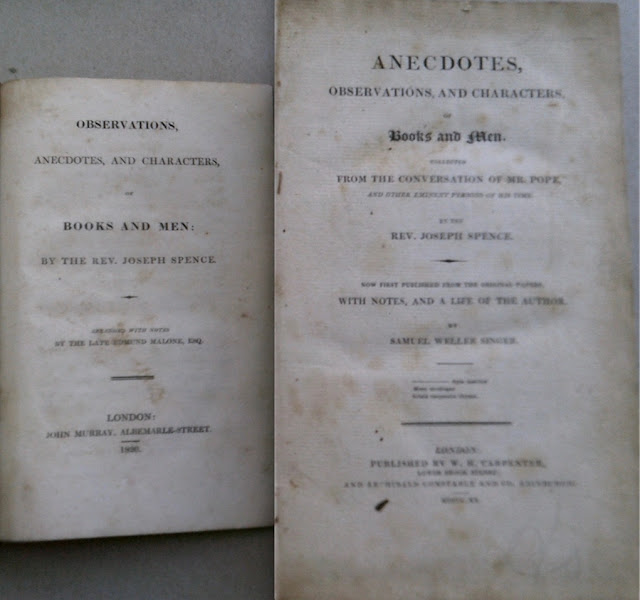 The definitive book on the history of Spence's Anecdotes before, during and after it was first published in 1820 has already been written—by James M. Osborn.   And yes, I have a copy of that book as well.  It took Osborn twenty years of collecting, researching, writing, and editing to complete his book—and in two volumes:  Observations, Anecdotes, and Characters of Books and Men,  Oxford: At the Clarendon Press, 1966.

Osborn is my primary source in telling you the story of Spence's Anecdotes.  But I will cite other sources, including the aforementioned copy of the Quarterly Review.  And yes, I have a copy of that too.

Joseph Spence (1699-1768), a close friend of Alexander Pope, was an Oxford Professor of Poetry,  and later Regius Professor of History. He was widely known to the literary men of the middle part of the eighteenth century.  And he put pen to paper, recording numerous anecdotes and observations about them, particularly about Alexander Pope.  Spence permitted Joseph Warton and William Warburton use of his papers for their works on Virgil and Alexander Pope.

In March 1767,  Spence signed a contract to sell his publishing rights to the bookseller, James Dodsley. Spence had already prepared a manuscript of his anecdotes to be published once Dodsley completed his payments, the last of which was scheduled to be paid on 24 March 1769. But the contract contained a discretionary clause that was to affect the publication of Spence's Anecdotes for years to come:

The public received additional bits of anecdotes when Samuel Johnson was permitted use of the manuscript in 1780 for his Lives of the Poets.  And in 1794, Edmund Malone was permitted to use it for his work on Dryden and others.  The Newcastle Manuscript, as it became known, was divided by sections of years. But Malone revised it in a new transcript for his own use, dividing the anecdotes into three sections:  Popiana, English poets and prose writers, and miscellaneous articles.

Edmund Malone died on May 25, 1812.  And here is where the history of Spence's Anecdotes begins to get a little murky.  In the Quarterly Review article,  the anonymous author, later identified as Isaac D'Israeli, stated that the Malone manuscript "was given to the late Mr. Beloe, who sold it to Mr. Murray (402)."

Austin Wright, in his book, Joseph Spence:  A Critical Biography, Chicago: University of Chicago Press, 1950, cites the D'Israeli reference, and in a footnote writes:


Isaac D'Israeli, who may be presumed to have known the truth, since he was writing for Murray's own periodical, says that the manuscript was sold to Murray by Beloe himself  (Quarterly Review, XXIII, 402)


Osborn, who cites Wright several times in his book, does not mention Wright's assertion that Beloe acquired the book and sold it to Malone.  Instead, Osborn refers to Malone's will in which Malone left James Boswell the Younger with "£200  and the superintendence of his scholarly books and papers.  Among them , of course, was the transcript of Spence's Anecdotes (xcvi)".

James Boswell the Younger, was well acquainted with Edmund Malone, helping him with his research when Malone's eyesight began to fail.  After Malone's death, Boswell went on to complete Malone's revision of his Plays and Poems of William Shakespeare.  This edition, published in 1821, was known in some circles as the "Third Variorum Edition" or "Boswell's Shakespeare."  Btw, I have the set in my library.  :-)

Osborn also notes that Malone's transcript of Spence's Anecdotes was listed as lot 3111 of the 1825 auction catalogue of the library of James Boswell the Younger.

There is no doubt that Murray wanted to publish Malone's transcript and had reportedly received the permission of the present Duke of Newcastle to publish it.  And according to Osborn, Murray hired Beloe to edit it.  The following advertisement appeared as an advertisement in the Oct 1814-Jan 1815 volume of The Quarterly Review: 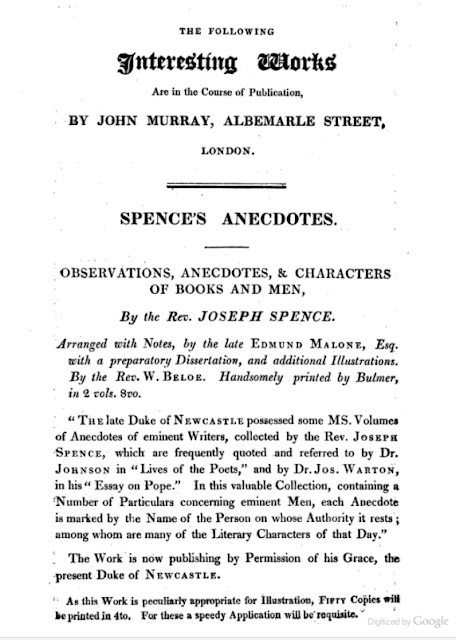 It is interesting to note that this advertisement states that the work will appear in two volumes.  In the Preface to his edition of Spence's Anecdotes, Singer wondered how Beloe could have extended the work to two volumes. The same advertisement, with the "2 vols" statement, appeared in the back of a book about Irish Grand Jury Laws that Murray published in 1815.  Another advertisement below appeared in the "Works on Hand or In Print" section of the Dec 1816 issue of The Asiatic Journal and Monthly Register for British India and Its Dependancies.  Note that Spence's Anecdotes is no longer listed as "2 vols," yet there are several other works of multiple volumes listed: 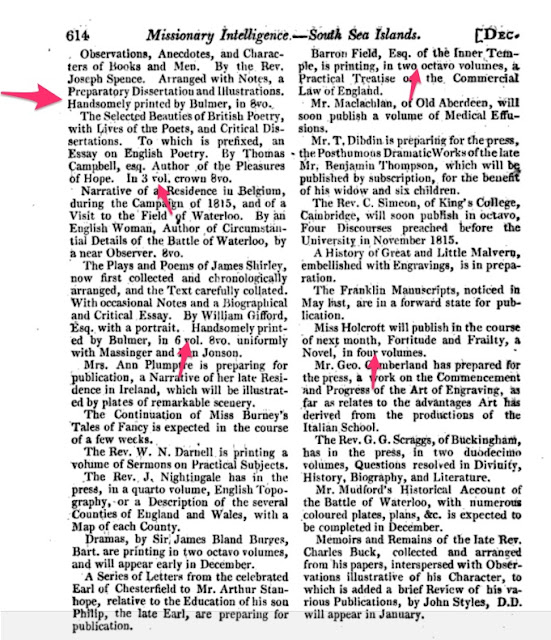 And here's another  advertisement that was included in an 1815 edition of The Miscellaneous Works of Edward Gibbon, also published by Murray, but not listed as "2 vols.".  It is possible that Murray already realized that Spence's Anecdotes could not be stretched to two volumes. 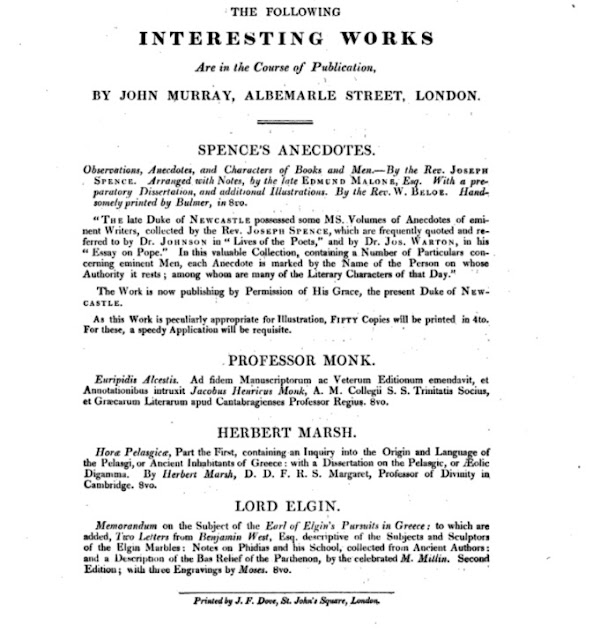 Murray never published an edition of Spence's Anecdotes that was edited by William Beloe.  Both D'Israeli and Wright state that Murray himself suppressed its publication.  But that may not be the case. Osborn notes that in 1815 the present Duke of Newcastle requested to see the Malone Manuscript and that Boswell sent it to him.  How long the Duke kept this manuscript is undetermined.  Beloe took ill and died in April 1817.   It is possible that Beloe  never had the opportunity to edit Malone's transcript of Spence's Anecdotes.

Remember Bishop Lowth, one of the executors of Spence's estate?  The Newcastle Manuscript was the only item of Spence's papers that he gave to the Duke of Newcastle.  According to D'Israeli, Lowth put Spence's remaining papers in a chest.  Years later, a "speculator" got his hands on the papers and into the hands of a publisher who had no scruples about publishing Spence's Anecdotes.  The chest contained a folio manuscript and another manuscript that Singer called "MS. B," loose papers, and memorandum books, from which Singer gathered the anecdotes for his edition.  Singer's edition of Spence's Anecdotes contained eight sections divided by years, and supplemental  anecdotes from Spence's papers—all told, many more anecdotes than what appeared in Malone's edition.  In his 1820 Preface, Singer provided no details of how he acquired Spence's papers.  But he was more forthcoming in the Preliminary Notice of the 1858 reprint of his book: John Murray was surprised when he heard that Singer's edition was about to be published. And he quickly arranged to publish Malone's edition.  And according to D'Israeli's article in the Quarterly Review, both editions were published on the same day.

Osborn goes further, and in his book he identifies to the date when the two editions of Spence's Anecdotes were published:  Jan 20, 1820.

That is probably the only mistake Osborn made in his entire book!  The fault, however,  lies with his source, which he cites in his footnote below:


Singer's Preface is dated 19 December 1819 and the volume apparantly was published on January 20.2 According to report, the Murray edition appeared on the same day (xcviii).

And in the footnote, Osborn added:

On page 184 of his biography of Spence, Wright wrote:


...the anecdotes of Joseph Spence appeared in two editions from separate manuscripts—and, according to D'Israeli, on the same day! 32


And in the footnote, Wright added:

I find it interesting that a notice for the publication of the Malone edition of Spence's Anecdotes never appeared in any January 1820 issues of The Times.

But more interesting are the "Books Published This Day" notices of the publication of Spence's Anecdotes which appeared in some of the January issues of  The Literary Gazette! 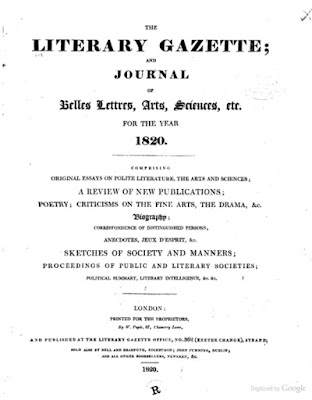 Malone's edition of Spence's Anecdotes appeared in the "Books Published This Day" section of the January 1, 1820 issue of The Literary Gazette: 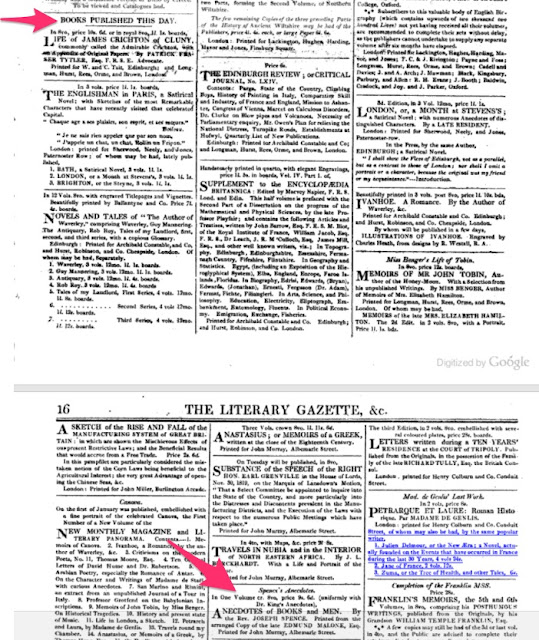 Both Malone's edition and Singer's edition appeared in the "Books Published This Day" section for the Jan 8, 1820 issue of The Literary Gazette: 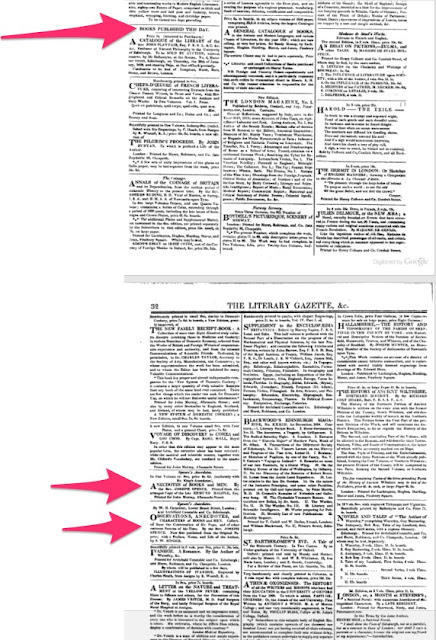 Singer's edition of Spence's Anecdotes appeared by itself in the Jan 15 issue.  And the notice was repeated in the Jan 22 issue: 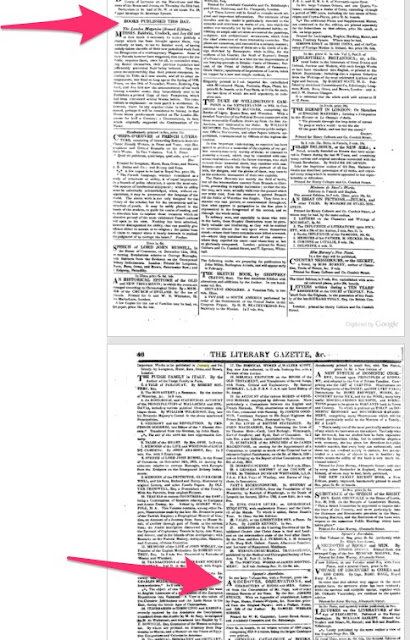 Both editions of Spence's Anecdotes may have been published on the same day. But I believe that day was not January 20, 1820.  They were published earlier that month.   On what date(s) were they published?  I will leave that to the scholars to determine. 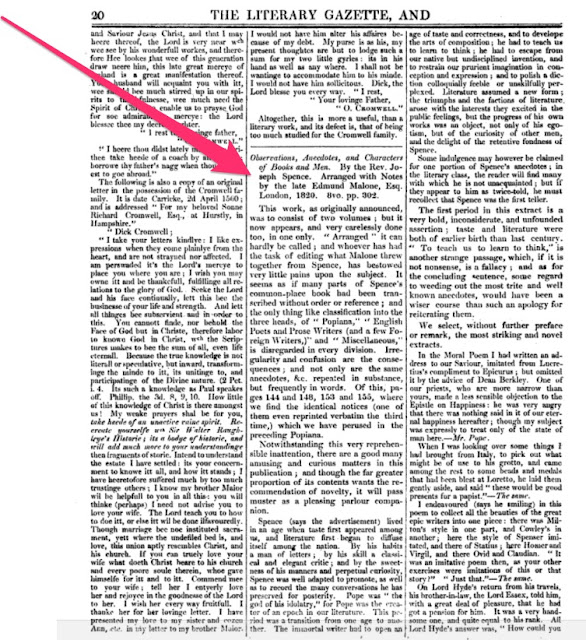 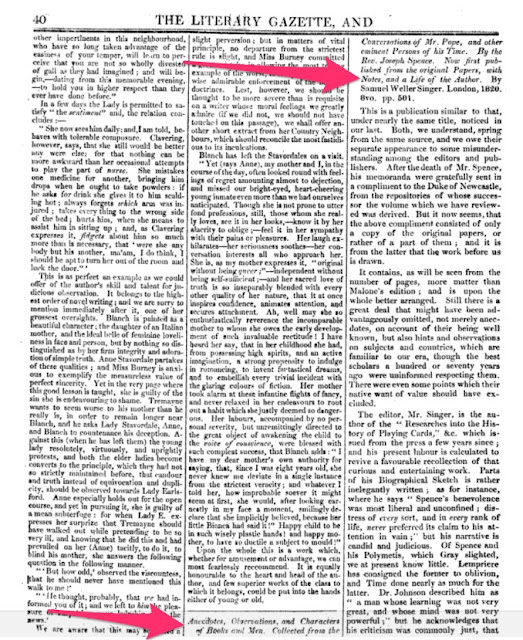 Finally, here's one last bit of information from Osborn, and this concerns the identity of the person who wrote the six-page Advertisement for Malone's edition of Spence's Anecdotes.  Osborn believed it was written by the very person who was in possession of Malone's Manuscript: James Boswell the Younger.  Osborn believed the "style and tone of it" said "Boswell."  Osborn added, "Perhaps some day some substantiating evidence may come to the surface."

If this blog post has piqued your interest in Spence's Anecdotes,  you will want to read Osborn's book: Observations, Anecdotes, and Characters of Books and Men.  Osborn's edition contains, by his count, 1,648 anecdotes—500 more anecdotes than what appeared in Singer's edition.  What's more, Osborn covers the various manuscript sources and their locations.  Most of Spence's Papers and manuscripts are in the Osborn Collection at Yale University.  Malone's manuscript is in the Folger Library.  MS. B?  Who knows?  According to Osborn, it was last seen in 1858.  Has it resurfaced since Osborn's book was published in 1966?  Good question!  I would like to know!