Apr 2012:  Around the Dining Room Table:  A View of My Shakespeare Collection 361

Apr 2013:  The Vanishing Breed:  A History of Bookbinding Compiled by Don Brady 786

Nov 2013:  Andrew Lang and the Property of a Gentleman Who Has Given Up Collecting
535

Aug 2014: The Monk, the Bookseller, and the Manuscript:  Tracking Lydgate's Boke of
the Sege of Troy Through Bernard Quaritch's Catalogues  767

The Second Beginning
of
The Chief End of Book Madness

One day, in the waning months of 1945, Laurence R. Carton, Princeton '07, visited Julian P. Boyd, Librarian of Princeton University.  In his hands, Carton held a copy of the following periodical: 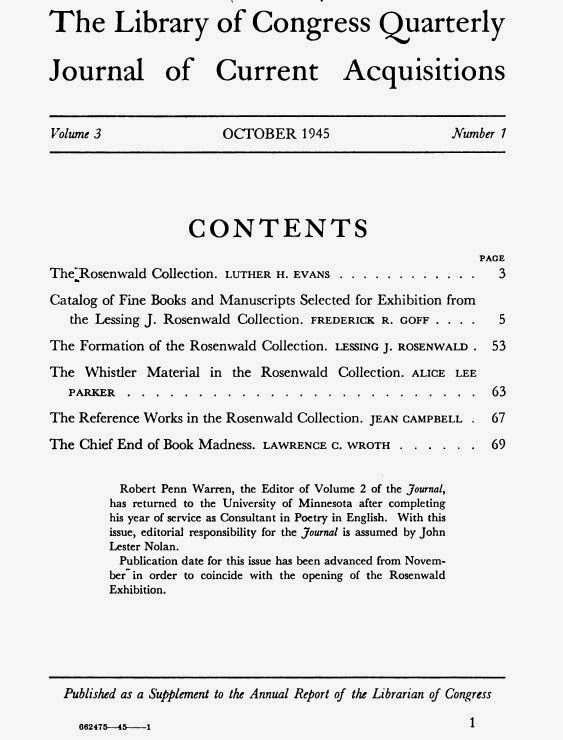 Carton was so impressed with Lawrence C. Wroth's essay, "The Chief End of Book Madness," that he wanted Princeton to reprint it for all the Friends of the Princeton Library.


. . . a most compelling rationalization of the function and scope of a rare book collection to serve as the basis for a declaration of policy in that field.  This document, originally submitted as a memorandum, was later published in the first number of The Library of Congress Quarterly Journal of Current Acquisitions.

Chauncey Brewster Tinker, Keeper of Rare Books, Yale University, at an event honoring Wroth and other librarians, called Wroth "the connecting link between the mad collector and the sane librarian."  And Tinker referred to Wroth's essay, "The Chief End of Book Madness:"

The very title of his fine essay, The Chief End of Book Madness, is indicative of the service he renders,  for it implies that the book-collector has an end and aim.  Of that end and aim, the libraries of the country are the beneficiaries.


Wroth's essay presented a persuasive argument on why a book collector should donate his collection to a library rather than sell it at auction.  And Laurence R. Carton knew that Princeton would benefit if it printed copies of "The Chief End of Book Madness" for all the Friends of the Princeton Library.  Moreover, Carton practiced what he preached:  a number of books in the Princeton Library had this bookplate pasted on their endpapers: 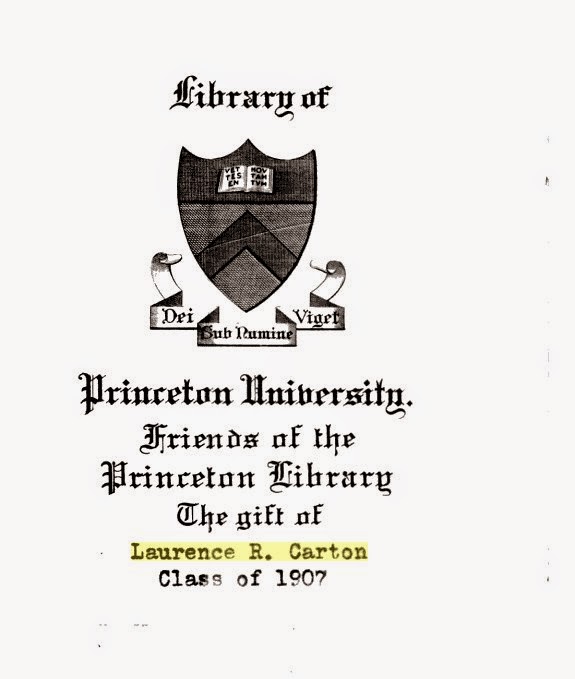 Julian P. Boyd thought Carton's suggestion to be a grand idea, and quickly obtained permission from both Wroth and the Library of Congress to reprint the essay.  Several librarians in the local area got wind of Princeton's plan and wanted in on the project.  Realizing he had a good thing going, Boyd notified librarians around the country, and soon, thirty librarians ordered more than eleven thousand copies of The Chief End of Book Madness.

The copies of the essay that were printed for The Friends of the Princeton Library were dispatched in time for the holidays in 1945.  And accompanying the copy of the essay was a greeting card which told the story, in Boyd's own words, of "The Second Beginning of The Chief End of Book Madness." 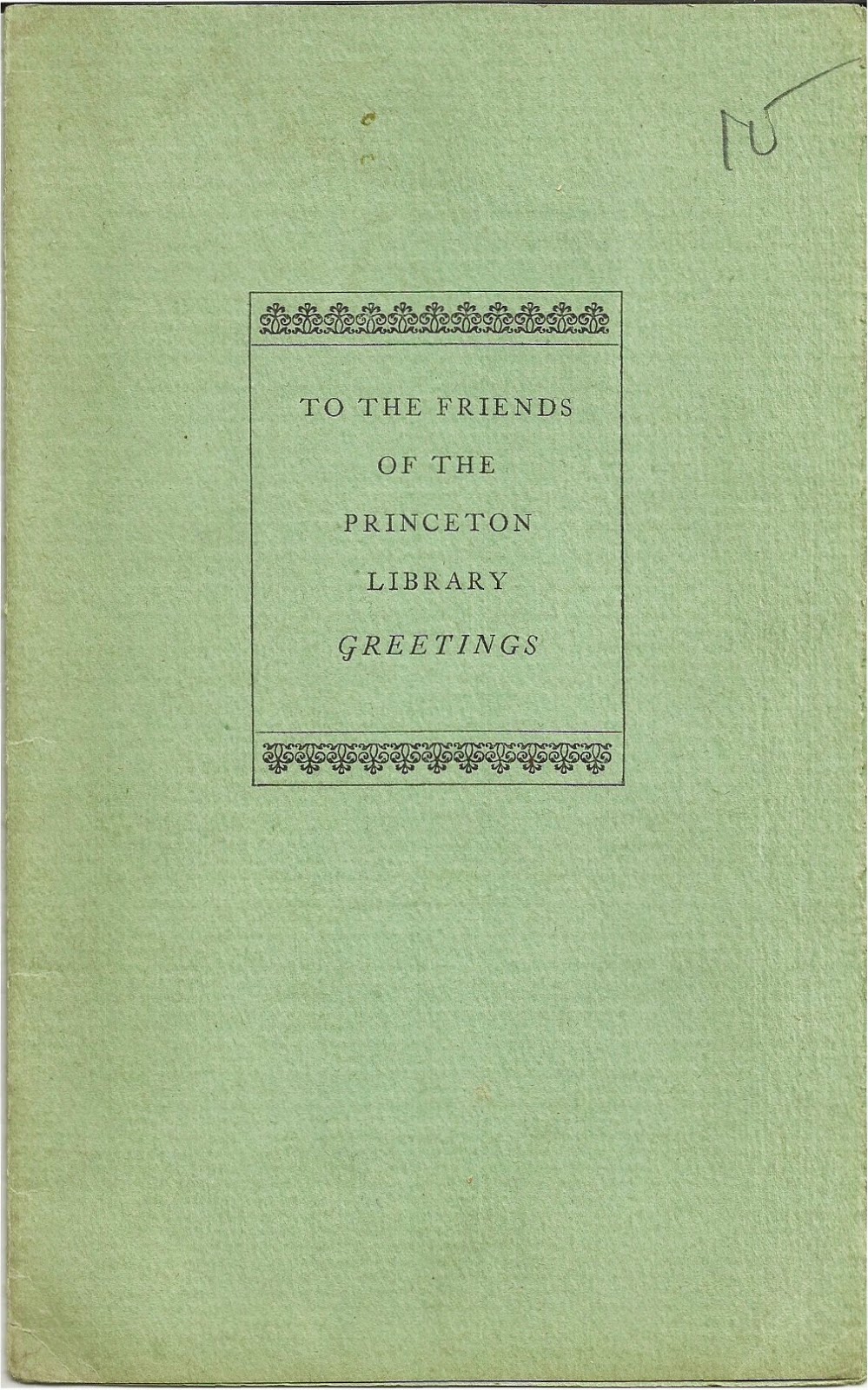 (Expanded below for easier viewing) 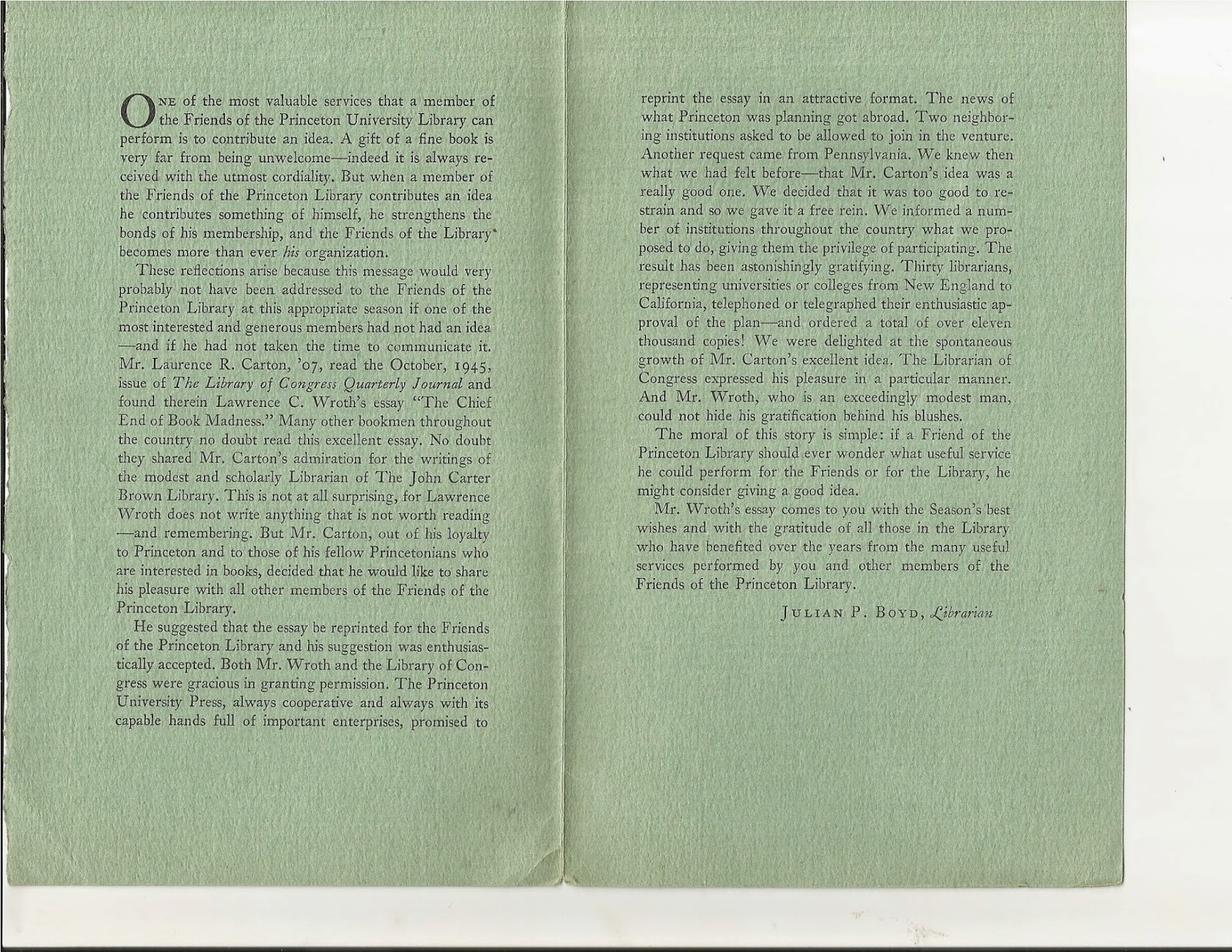 For best viewing, here's a PDF File of the Greeting Card 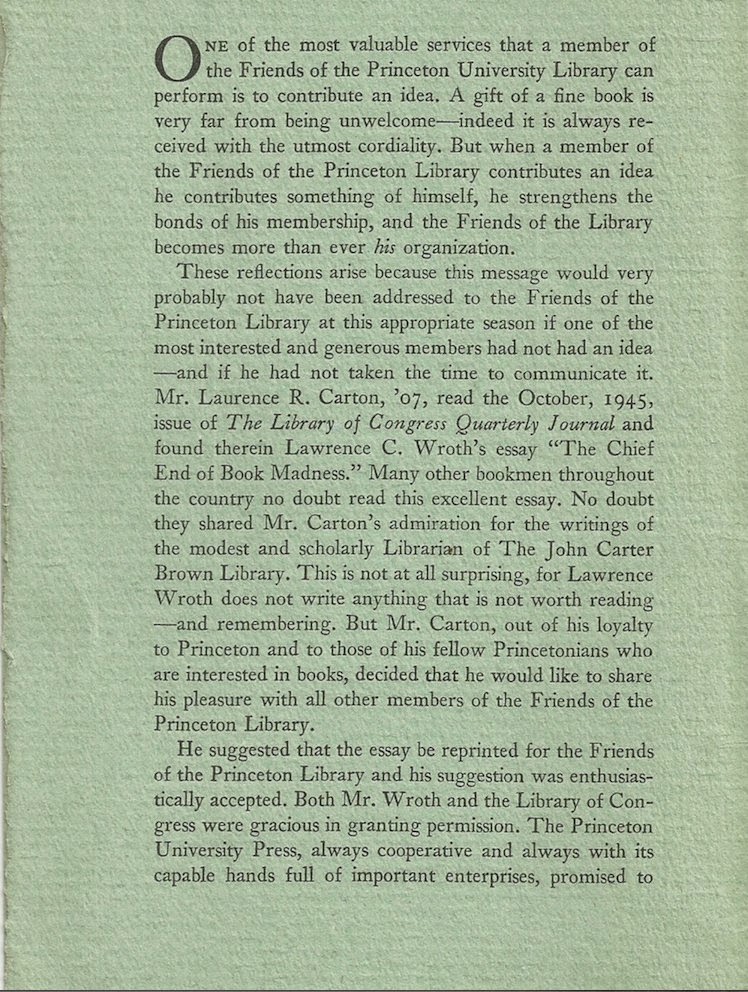 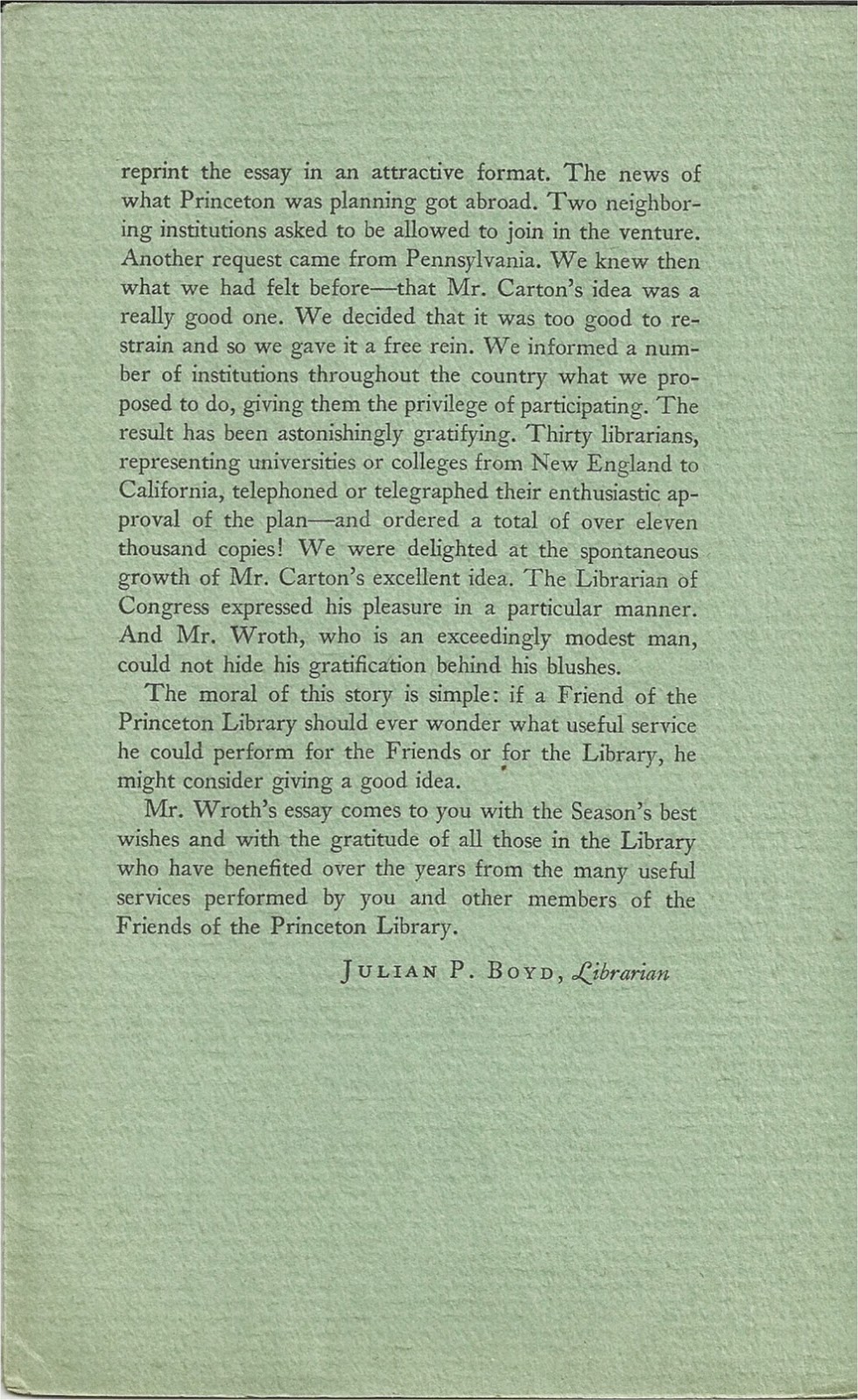 And courtesy of Archive.Org is a link to
The Chief End of Book Madness. 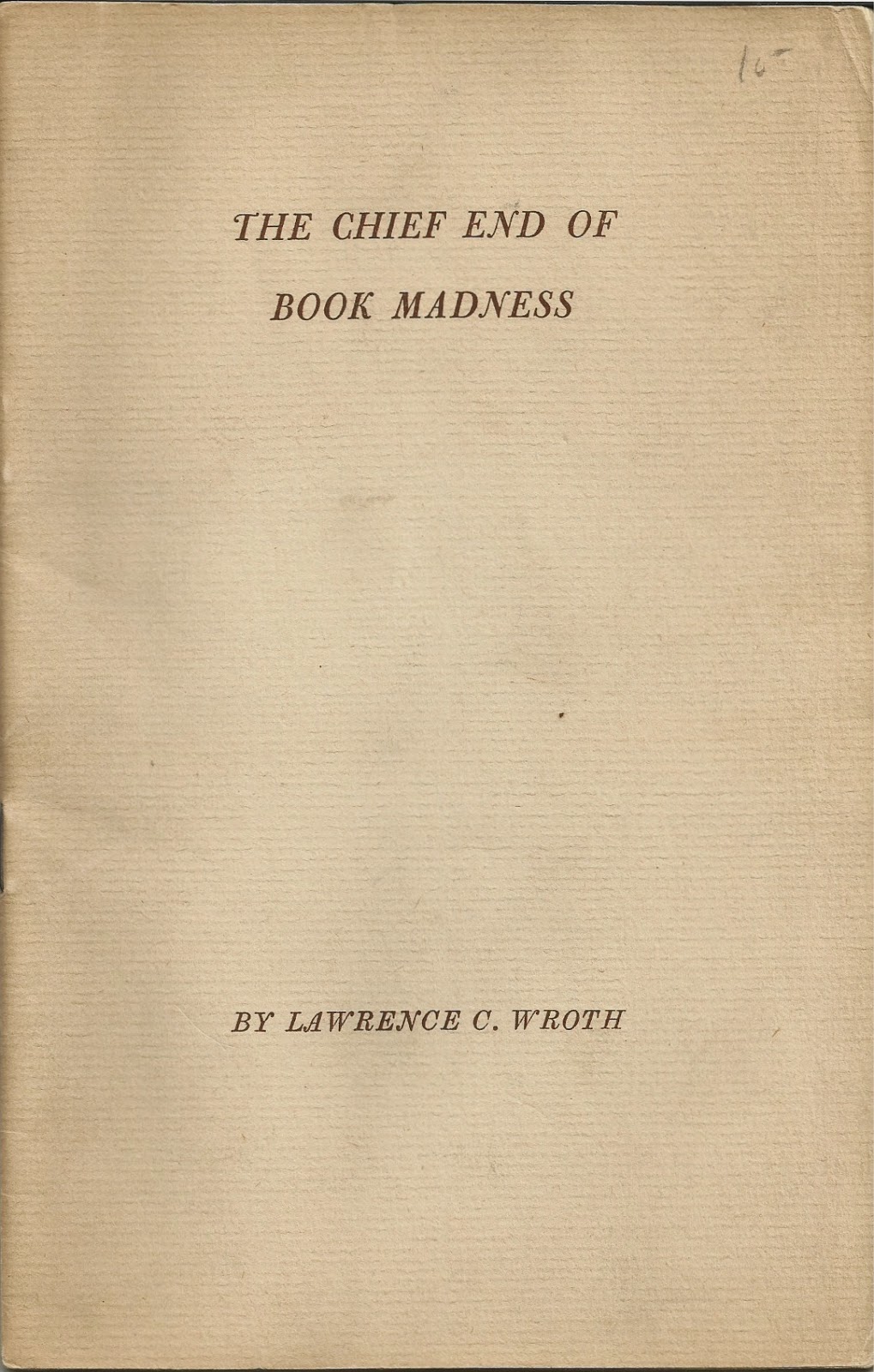 Postscript:  It was pure serendipity that both The Chief End of Book Madness and the Princeton Greeting Card were reunited in The Last Book Sale Care Package.