Some
Worcester Sources
And
Other Discourses
Concerning
The Dictionary Wars 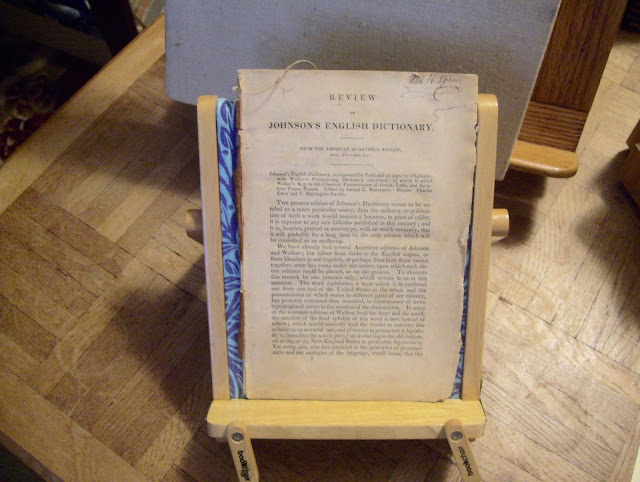 This pamphlet has been somewhere on my desk ever since I acquired it in The Last Book Sale Care Package last summer.   And  I finally got around to writing about it.  This pamphlet has led me down two paths: to exploring the "dictionary wars," and to researching the pamphlet itself.

The first paragraph printed on the pamphlet always gets my attention:


The present edition of Johnson's Dictionary seems to be entitled to a more particular notice, than the ordinary re-publication of such a work would require ; because, in point of utility, it is superior to any one hitherto published in this country; and it is, besides, printed in stereotype, with so much accuracy, that it will probably for a long time be the only edition which will be consulted as an authority. 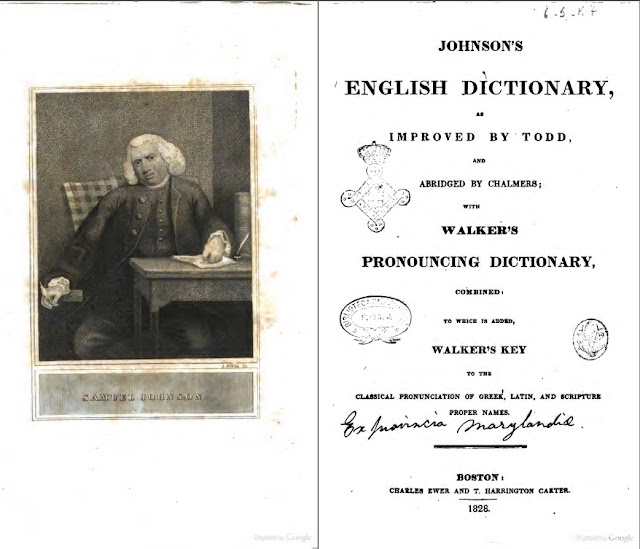 From The American Quarterly Review Vol IV No. VII 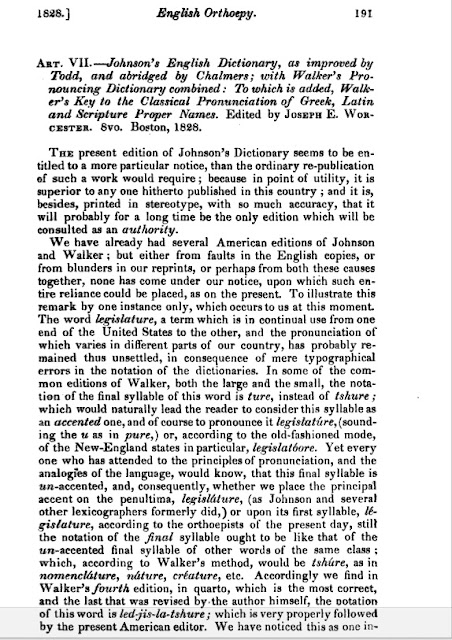 From The North American Review Oct 1828 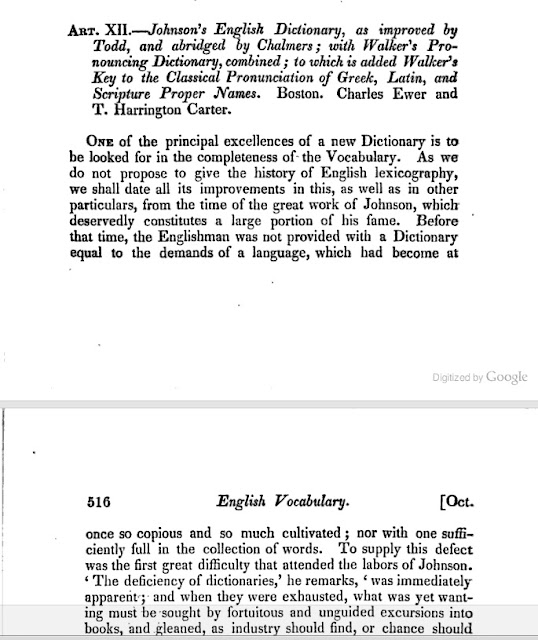 Almost one hundred and eighty-seven years after they were written, these two reviews aroused my own interests in Worcester's edition of this dictionary.  And I acquired an inexpensive copy in need of repair from Barbara of New Jersey (babzguys3 on ebay). 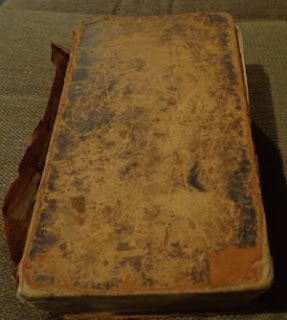 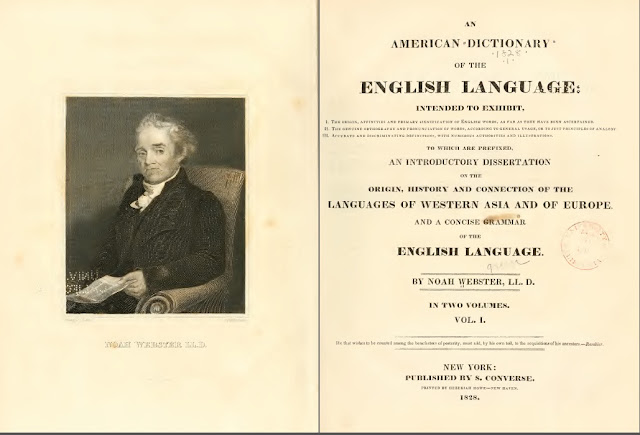 Webster's dictionary was not a money maker for its publisher, Sherman Converse.
The dictionary was too expensive for the common man ($20).  Converse wanted Webster to abridge the dictionary.  And he wanted certain changes made in orthography (spelling) that Webster was unwilling to make.  Now seventy years old, Webster complained that he didn't have the stamina to complete the task.

Sherman Converse had only one other person in mind to abridge Webster's dictionary:  Joseph E. Worcester.


Joseph Emerson Worcester (1784-1865) was a former schoolmaster who had written several books on history and geography.  His edition of Johnson's Dictionary was his first venture as a lexicographer.   Many Americans still preferred the traditional spelling and pronunciation of words, and Worcester's edition proved quite popular. J. D. Fleeman, in his Bibliography of the Works of Samuel Johnson, recorded that Worcester's edition of Johnson's Dictionary went through 25 impressions between 1828 and 1860.

Sherman Converse wrote Worcester twice, asking him to undertake the task of abridging Webster's dictionary.  And twice Worcester declined because he was already at work compiling his own dictionary, his Comprehensive Pronouncing and Explanatory Dictionary.   Converse then went to see Worcester in Cambridge, and convinced him to abridge Webster's dictionary, paying him $2000 for the task.  Worcester was to regret that decision for the rest of his life.   Worcester offered to include his newly-formed "Synopsis of Words Pronounced by Different Orthoëpists"—with the stipulation that he could still use the Synopsis in his own dictionary.  Converse was glad to include the Synopsis because Webster had refused to use any of Walker's pronunciations in his own dictionary.   Certain other provisions were added to the contract, which were later printed in the prefaces of the 1829 abridged edition of Webster's Dictionary and Worcester's 1830 edition of his Comprehensive Pronouncing and Explanatory Dictionary.

Preface to the 1829 Abridged Edition of Webster's Dictionary 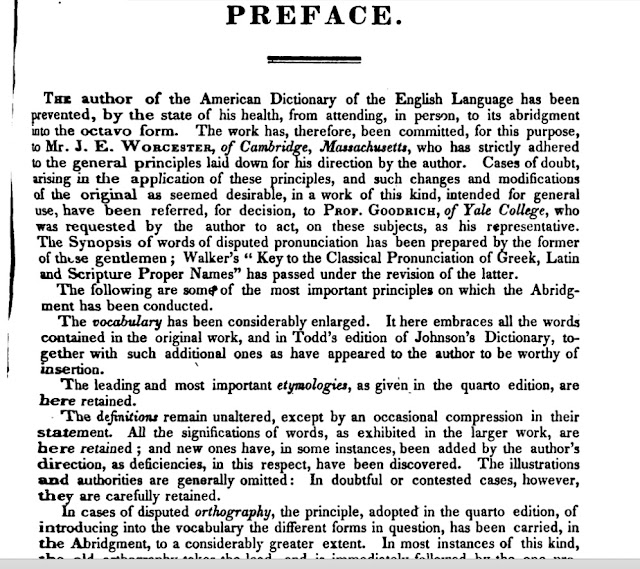 Worcester's Preface to His Dictionary 1830 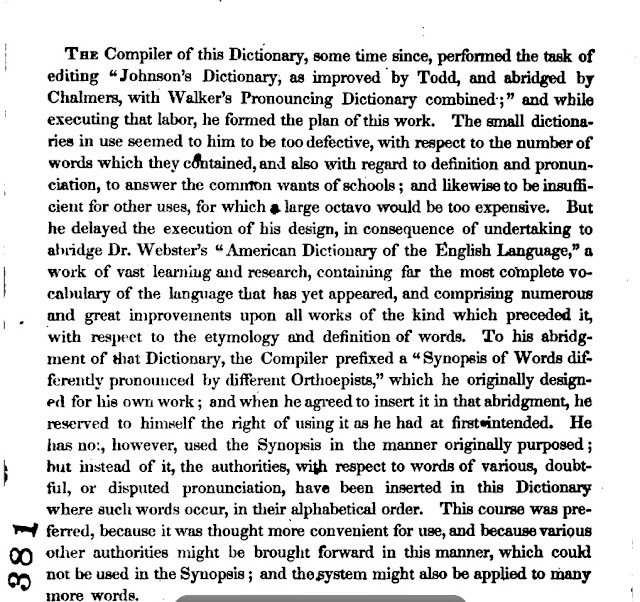 Worcester abridged Webster's Dictionary, and Converse published it in 1829.  A year later, it  was already in its fifth edition: 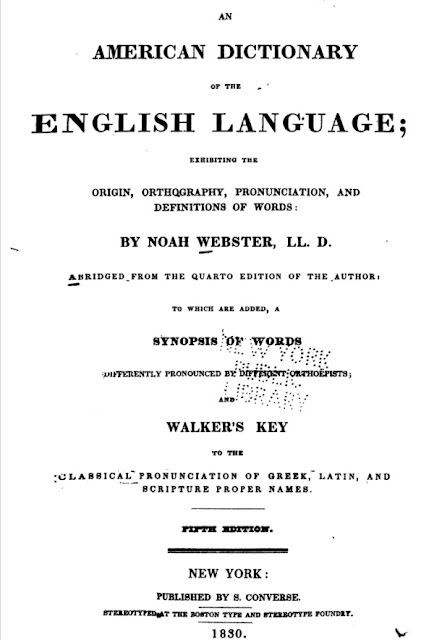 There was another dictionary published in 1830:  Worcester's Comprehensive Pronouncing and Explanatory Dictionary 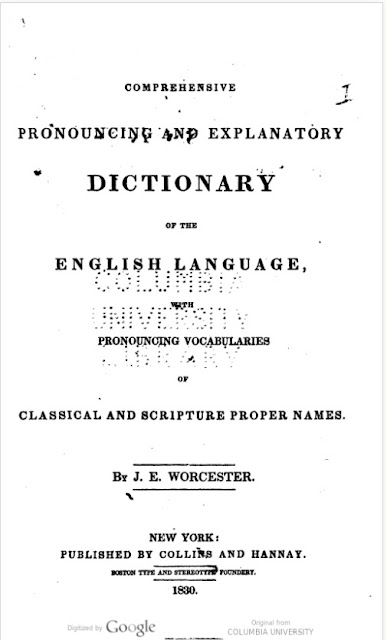 Worcester's dictionary was selling extremely well.  And in November 1834, the following anonymous notice appeared in the Worcester Palladium:

A gross plagiarism has been committed by Mr. J. E. Worcester on the literary property of Noah Webster Esq.  It is well known that Mr. Webster has spent a life, which is now somewhat advanced, in writing a dictionary of the English Language, which he published in 1828, in two quarto volumes. Three abridgments have since been made—one in octavo form, and two still smaller for families and primary schools.  To aid in the drudgery of producing these abridgments, Mr. Webster employed Mr. Worcester, who, after becoming acquainted with Mr. Webster's plan, immediately set about appropriating to his own benefit the valuable labors, acquisitions, and productions of Mr. Webster. He has since published a dictionary, which is a very close imitation of Webster's, and which, we regret to learn, has been introduced into many of the primary schools of the country....  At all events, before people buy his wares, they should do well to inquire how he came by them.
Worcester Palladium  November 26, 1834 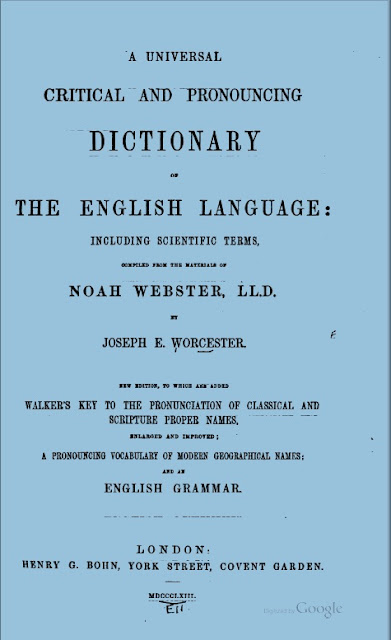 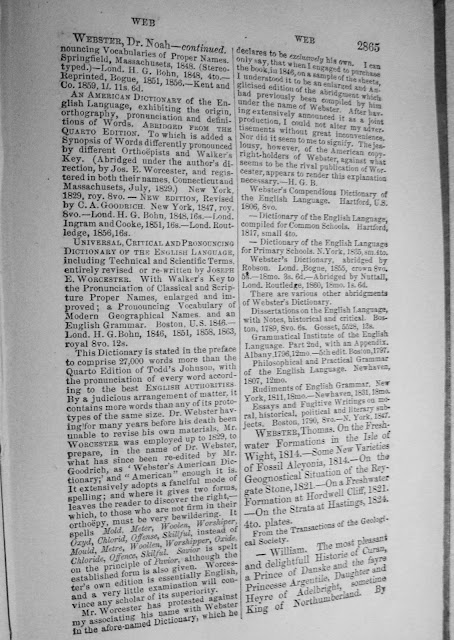 In 1854, the Boston publishers, Jenks, Hickling and Swan, Worcester's publishers at the time, published two extensive rebuttals against all the charges against Worcester from Webster, the Merriam Brothers and Henry G. Bohn.

Reply to Messrs. G. & C. Merriam's Attack Upon the Character of Dr. Worcester
and His Dictionaries. 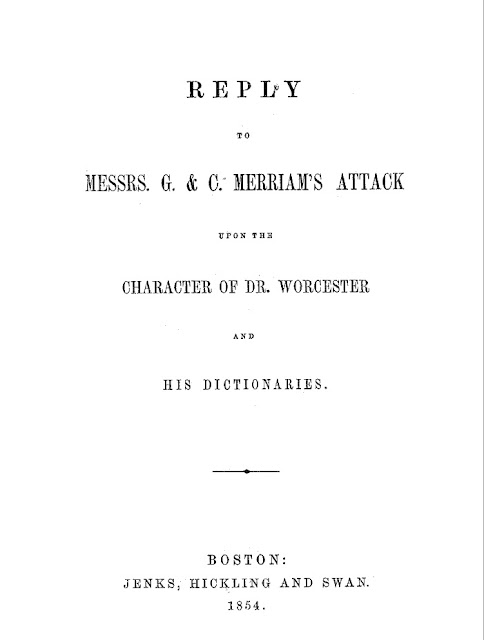 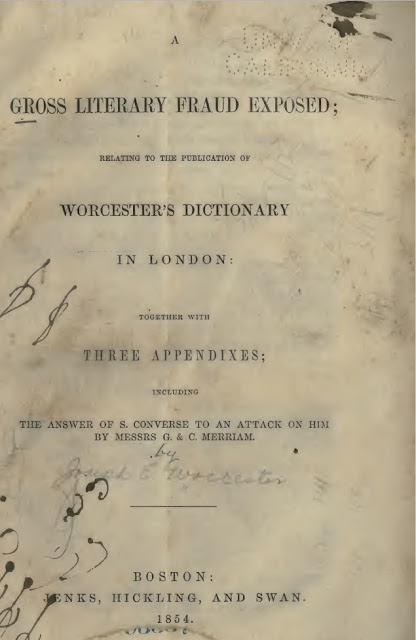 The rebuttals included letters from Sherman Converse, who was still alive, and who provided a detailed account of his hiring of Worcester to abridge Webster's dictionary.   As to whether Converse hired Worcester for the Webster family,  Converse stated that he was an "agent of no man."

The rebuttals also included a letter  from Chauncey Goodrich to Worcester, dated  Nov 2, 1853.  Goodrich had acted as Webster's representative in the abridgment of Webster's dictionary.

When compiling a dictionary, it is practically impossible not to commit "plagiarism"—unless the lexicographer creates new definitions for old words.  Consider the definitions of the word, source, in the following dictionaries.  They are all essentially the same: 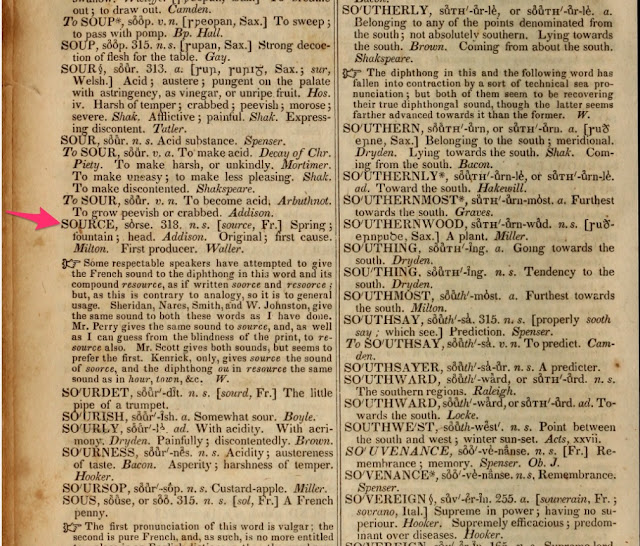 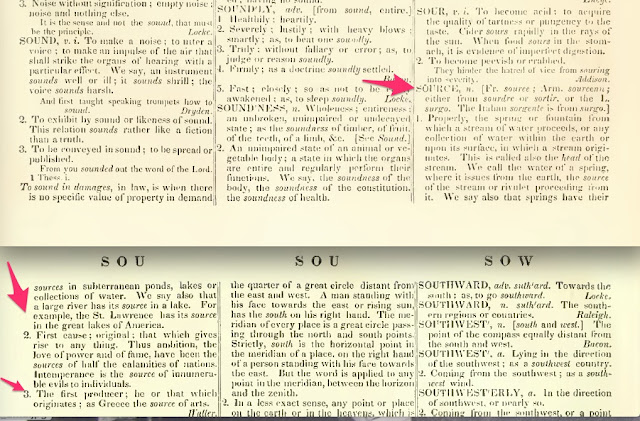 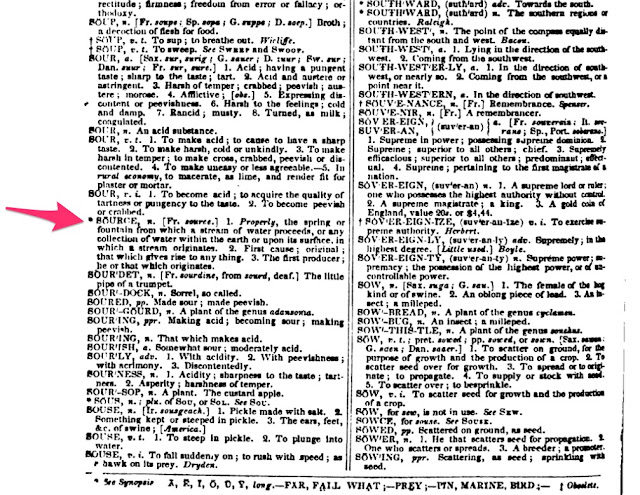 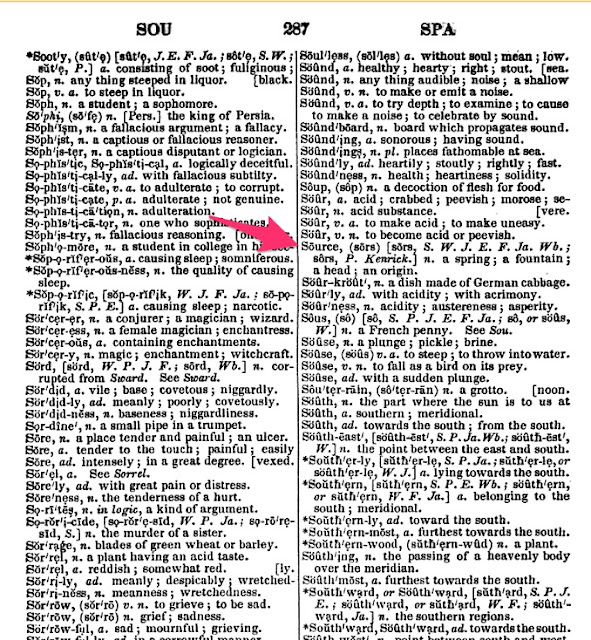 And as for Worcester's sources,  Webster had accused Worcester of stealing 121 words from his dictionary.  Here is part of Worcester's 1834 reply, abstracted from The Critic Criticised and Worcester Vindicated by William Draper Swan, Boston 1860: 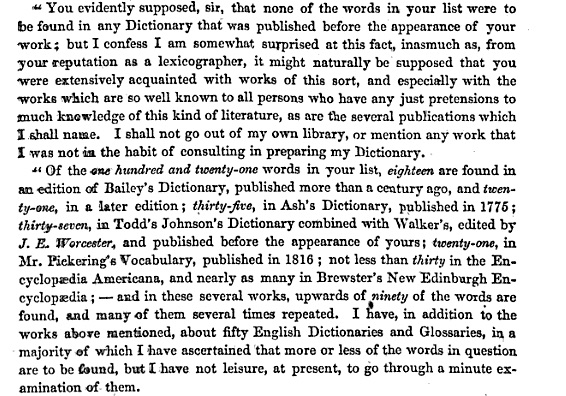 If you really want to see an example of gross plagiarism, here's one for you: 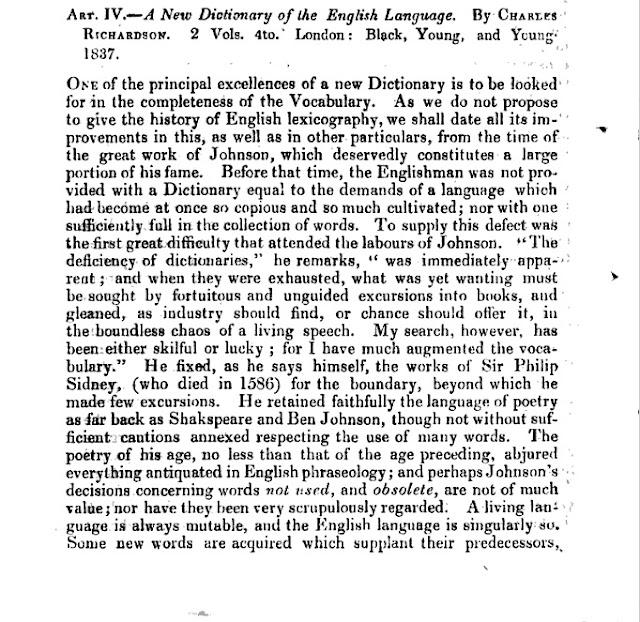 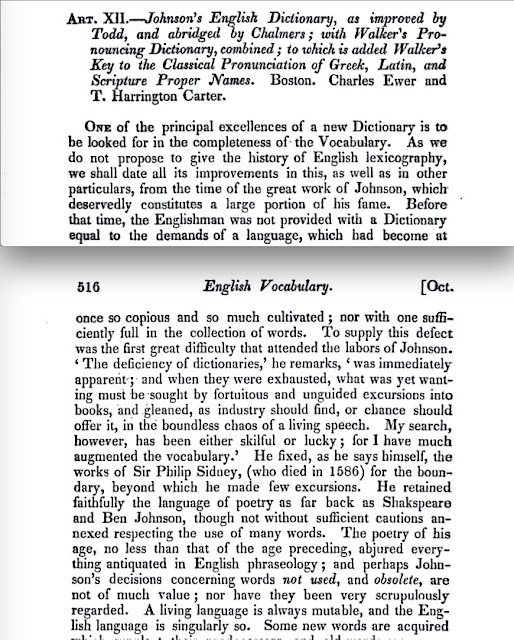 
Posted by Jerry Morris on Thursday, September 10, 2015 No comments: