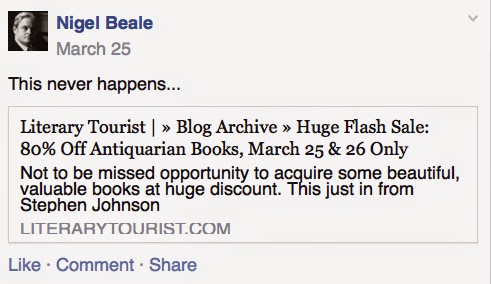 I noticed Nigel Beale's Facebook post on March 25th.  And I had to smile.  Because March 25th was my wife's birthday.

In our forty-six years of marriage,  I usually find something I "have to buy" for myself on or before my wife's birthday.  And there is usually something my wife "has to buy" for herself on or before my birthday.  This year was no different.  There was one item I had to buy during IOBA bookseller Stephen Johnson's Flash Sale.  But it wasn't a book:

One of the association copies I would be discussing in a presentation I was giving before the Florida Bibliophile Society the following Sunday was formerly owned by Laura E. Richards,  the author of over ninety books herself, whose mother, Julia Ward Howe, was the author of The Battle Hymn of the Republic.  And now, on my wife's birthday, I was going to buy an ALS by Laura Richards for My Sentimental Library Collection.  And with the 80% discount, the cost of the ALS was more than reasonable. 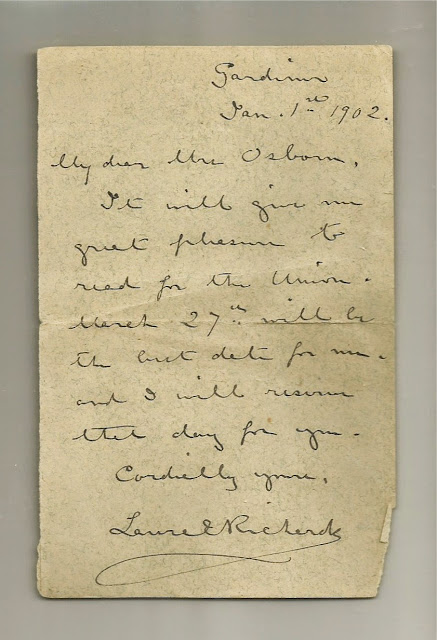 The "Union," referred to in the letter was the Gardiner Women's Philanthropic Union, an organization that coordinated the efforts of several social reform organizations in the town of Gardiner.   Laura E. Richards (1850-1943) was its Founding President and served for 26 years (bio in hyperlink courtesy of Deidre Johnson).

Since I now had an autograph letter signed by Laura E. Richards and a book from her library, I decided I had to have a book by or about her as well.  And I bought one from Andre Strong Bookseller, Blue Hill, Me. via Abebooks. 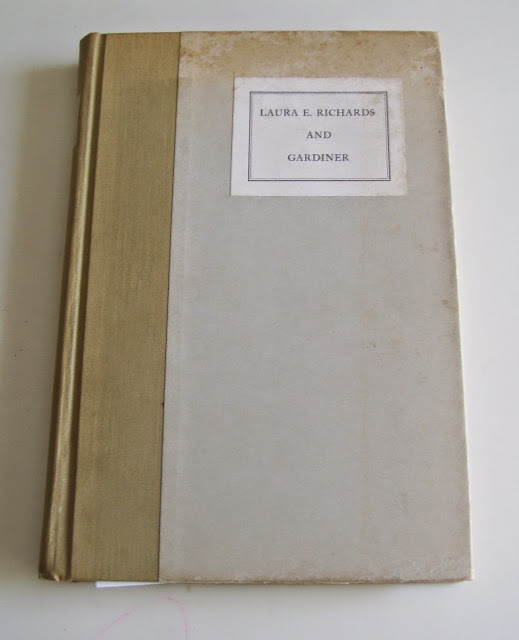 One sentence on the third line of the listing caught my eye:  Letter glued to rfep.

The letter turned out to be a TLS from Gamidy  that was addressed "To my Grandchildren and Great-Granchildren," acknowledging the receipt of a silver tray for her ninetieth birthday. 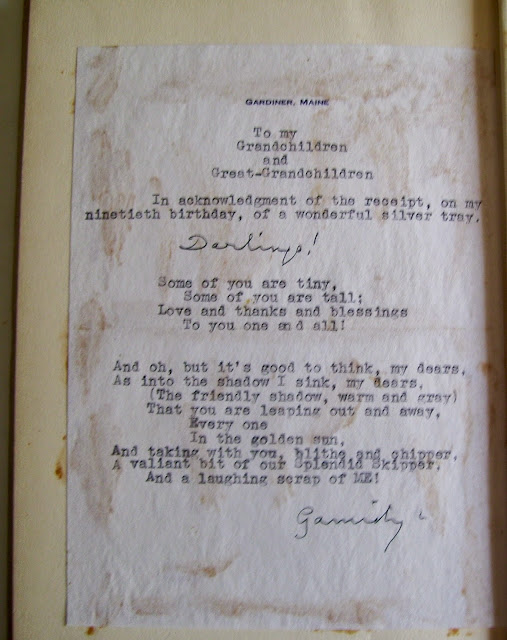 The book itself was printed for Laura E. Richards's ninetieth birthday.  It contained Mrs. Richards's appeals and statements concerning town welfare, obituary notices she wrote, and several verses, together with three fables chosen as "specially characteristic of their writer."  The Splendid Skipper  mentioned in her little ditty was her husband, Henry Richards, who was known around town as The Skipper.  The word Gamidy on the TLS was definitely written by Laura E. Richards's hand, and was a family nickname for her.  I believe the TLS was already glued to the rfep of the book when it was given to either a grandchild or great-grandchild, making the book a presentation copy of sorts.

A member of the Richards Family, a famous "birder," Tudor Richards (1915-2009), mentions Gamidy in a memoir he wrote while serving in the United States Navy:  Dive Bombers and Other Birds.  He went home on leave in November 1942, and in his memoir he wrote, ". . . I also managed to go down to Gardiner which was the last time I saw Gamidy before she died."

The next book I bought knocked my socks off!  And it came from another IOBA bookseller.

Back in October 2011, Alice Voith, proprietor of My Wings Books in Chicago, interviewed me for the IOBA Standard.  My interview appeared in the Summer 2012 issue of that journal.  Fast forward to last month.  Chris Volk,  a former president of the IOBA, and one of the owners of Bookfever.com, was cataloguing an inscribed copy of a book when she thought of me and remembered something I said in my IOBA interview:

At this time, there are no IOBA booksellers who list association copies as one of their specialities.

She had been meaning to write me for a long time, and  finally, on April 27, 2015, she wrote me.  She said I would find many association copies from IOBA booksellers if I searched the IOBA book search engine for the key words "association copy" in quotes."  And she offered a ten percent discount on any book of interest that I found on her own website. 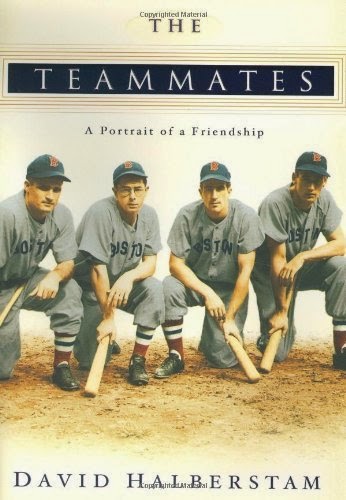 The Teammates by David Halberstam, New York 2003, was the book I had recently read.  And, yes, one of the teammates was the former owner of the book I had to buy from Chris Volk.

College English teacher—turned writer—Frederick Turner was the author of the book I had to buy.  Previously, he had written books on John Muir, Henry Miller, and Geronimo, to name a few.  And in the mid 1990s he was writing a book about baseball:  specifically about when the baseball players returned to the game after serving their country during WWII: When the Boys Came Back:  Baseball and 1946 by Frederick Turner, New York: 1996. 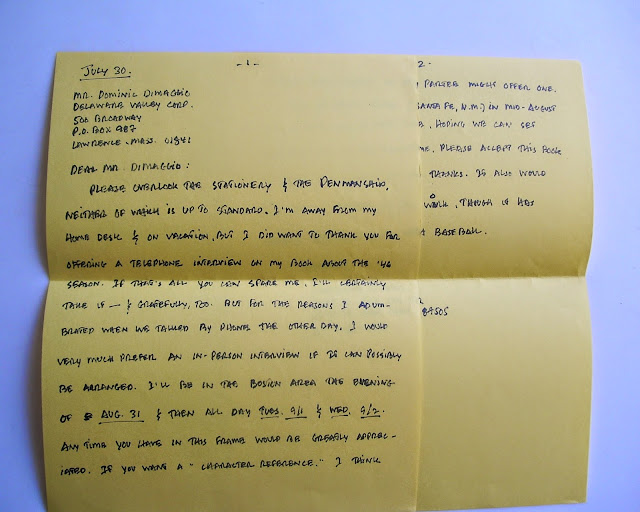 Turner sent Dominic DiMaggio a copy of his book, Of Chiles, Cacti, and Fighting Cocks: Notes on the American West, as a "token of his thanks," and as a sample of his work. 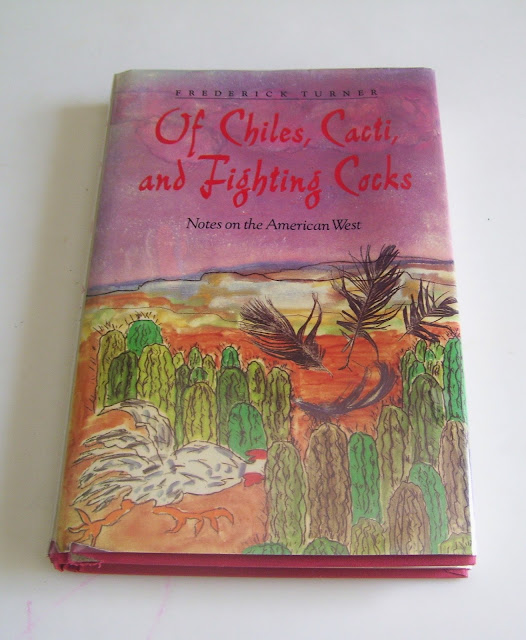 For Dominic DiMaggio,
With all good wishes,
Frederick Turner 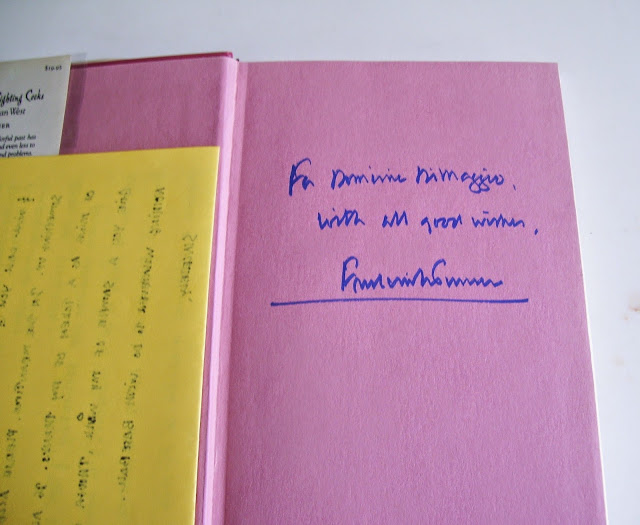 I had to have a copy of Frederick Turner's book, When the Boys Came Back:  Baseball and 1946, not only to read, but also to find out if Turner ever got that in-person interview from Dominic DiMaggio.  So I bought an inexpensive copy via Abebooks. 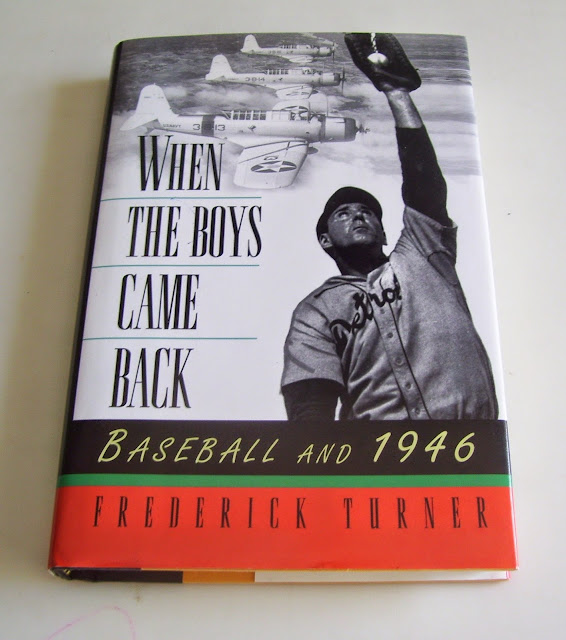 In the Acknowledgments  section of his book Frederick Turner never mentioned what kind of interview he got from Dom DiMaggio.  So I queried Turner.  And on May 12th, he replied.

Dear Mr. Morris,
Thanks for yr kind note. It made me wonder whether I had inadvertently failed to thank DiMaggio in the Acknowledgments.  He's in there & certainly deserves to be: he gave me an extensive interview, inc. a detailed description of the deciding game of the '46 World Series.

I had obtained Mr. Turner's email address from his website, received permission to quote him,  read his short and sometimes humorous bio—you have to read it—and placed When the Boys Came Back:  Baseball and 1946 on the very top of my have-to-read book pile.  It will later rub covers with Dom DiMaggio's copy of Of Chiles, Cacti, and Fighting Cocks!

And that would have been the end of this blog post.  But on May 20th I learned that Stephen Johnson, the IOBA bookseller who sold the Richards ALS to me, recently suffered a seizure.  I sent him get well wishes, and even found another book I had to buy from him:  a choice association copy for my NYC Collection.

You can send Stephen Johnson best wishes for a speedy recovery via the contact link on his website:  Allingtonbooks.com

And I will tell you about that NYC association copy I "had to buy" in a blog post about my NYC collection later this year.