Tipped into my copy of About a Great Book, With Some Literary Autographs is this presentation sheet: 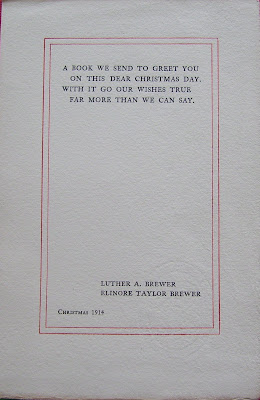 Except for one, each Christmas, from 1912 to 1932, Luther Brewer, at his Torch Press, privately printed a book "For the Friends of Luther Albertus and Elinore Taylor Brewer." I have over half of them in my library.

For Christmas 2012, I want to begin a similar custom to greet "all my bibliobuddies." But instead of greeting you with a book, each Christmas I will greet you with one essay from Contributions to Biblionotes. 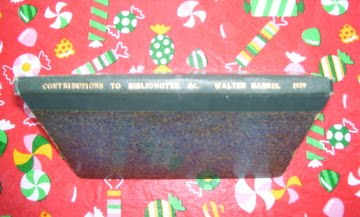 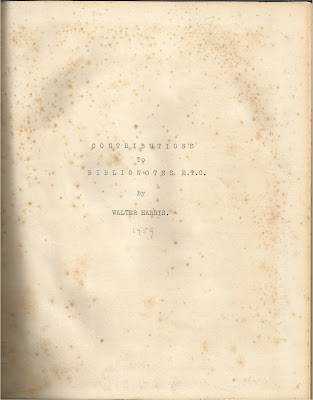 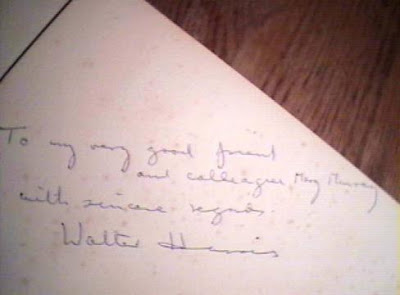 The source for this first Christmas blog post comes by way of England, from Questor Rare Books, to be exact, and acquired in 2002: 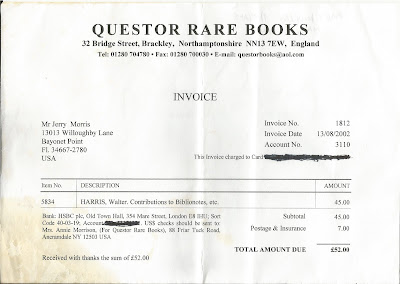 What is Contributions to Biblionotes? And who is Walter Harris? And who is Mary Murray?  The answers to your questions will start to unfold when you read the notes below, which were posted one of my old Picture Trail photo albums: 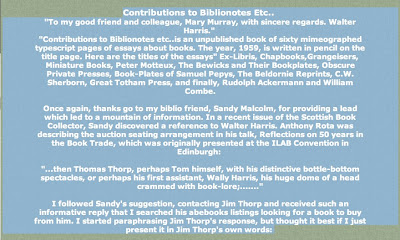 And here is Jim Thorp's response: 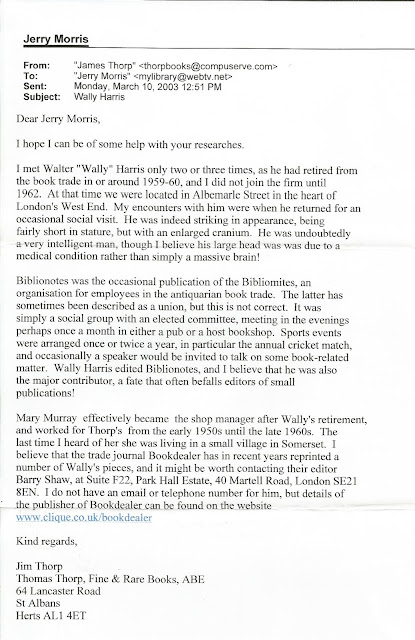 In 2003, I contacted Barry Shaw, the former editor of the Bookdealer; but, complaining that his memory wasn't what it used to be, he couldn't recall if he published any of Walter Harris's twelve pieces.

And now, without further ado, here is the first of the "Twelve Blog Posts for Christmas." The first blog post is a piece on bookplates which Walter Harris wrote in 1953.  If you find the following pages too hard to read, keep scrolling down because I typed Walter Harris's piece in its entirety.

Merry Christmas to all my bibliobuddies! 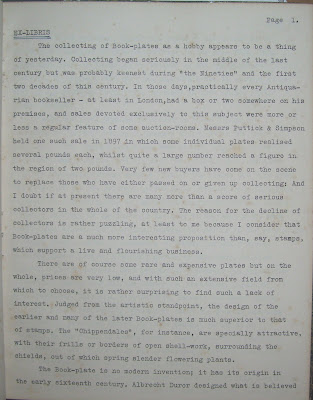 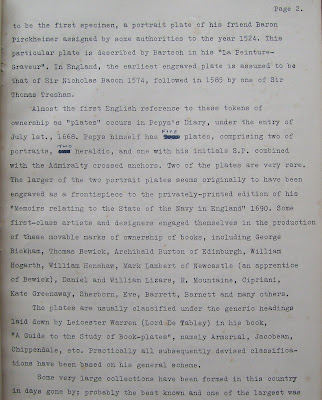 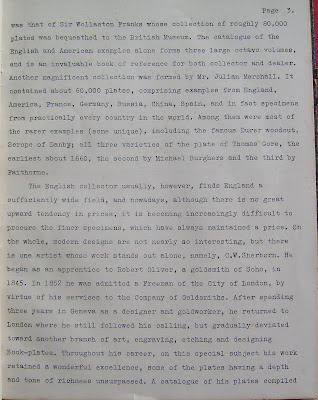 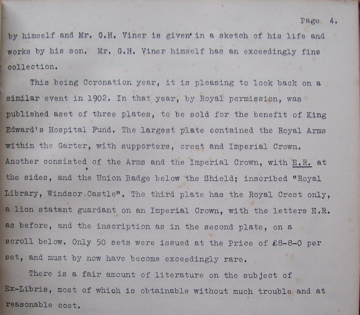 The collecting of Book-plates as a hobby appears to be a thing of yesterday. Collecting began seriously in the middle of the last century but was probably keenest during "the Nineties" and the first two decades of this century. In those days, practically every Antiquarian bookseller - at least in London, had a box or two somewhere in his premises, and sales devoted exclusively to this subject were more or less a regular feature on some auction-rooms. Messrs Puttick & Simpson held one such sale in 1897 in which some individual plates realized several pounds each, whilst quite a large number reached a figure in the region of two pounds. Very few new buyers have come on the scene to replace those who have either passed on or given up collecting. And I doubt if at present there are more than a score of serious collectors in the whole of the country. The reason for the decline of collectors is rather puzzling, at least to me because I consider that Book-plates are a much more interesting proposition than, say, stamps, which support a live and flourishing business.

There are of course some rare and expensive plates but on the whole, prices are very low, and with such an extensive field from which to choose, it is rather surprising to find such a lack of interest. Judged from the artistic standpoint, the design of the earlier and many of the later Book-plates is much superior to that of stamps. The "Chippendales," for instance, are especially attractive, with their frills or borders of open shell-work, surrounding the shields, out of which spring slender flowering plants.

The Book-plate is no modern invention; it has its origin in the early sixteenth century. Albrecht Durer designed what is believed to be the first specimen, a portrait of his friend Baron Pirckheimer assigned by some authorities tot he year 1524. This particular plate is described by Bartech in his "La Peinture-Graveur." In England, the earliest engraved plate is assumed to be that of Sir Nicholas Bacon 1574, followed in 1585 by one of Sir Thomas Tresham.

Almost the first English reference to these tokens of ownership as "plates" occurs in Pepys's Diary, under the entry of July 1st, 1668. Pepys himself has five plates, comprising two of portraits, two heraldic, and one with his initials S.P. combined with the Admiralty crossed anchors. Two of the plates are very rare. The larger of the two portrait plates seems originally to have been engraved as a frontispiece to the privately-printed edition of his "Memoirs relating to the State of the Navy in England" 1690. Some first-class artists and designs engaged themselves in the production of these movable marks of ownership, including George Bickham, Thomas Bewick, Archibald Burton of Edinburgh, William Hogarth, William Henshaw, Mark Lambert of Newcastle (an apprentice of Bewick), Daniel and William Lizars, R. Mountaine, Cipriani, Kate Greenaway, Sherborn, Eve, Barrett, Barnett and many others.

The plates are usually classified under the generic headings laid down by Leicester Warren (Lord De Tabley) in his book, " A Guide to the Study of Book-plates," namely Armorial, Jacobean, Chippendale, etc. Practically all subsequently deceived classifications have been based on his general scheme.

Some very large collections have been formed in this country in days gone by; probably the best known and one of the largest was that of Sir Wollaston Franks whose collection of roughly 80,000 plates was bequeathed to the British Museum. The catalogue of the English and American examples alone forms three large octavo volumes, and is an invaluable book of reference for both collector and dealer. Another magnificent collection was formed by Mr. Julian Marshall. It contained 60,000 plates, comprising examples from England, America, France, Germany, Russia, China, Spain, and in fact specimens from practically every country in the world. Among them were most of the rarer examples (some unique), including the famous Durer woodcut, Scrope of Danby; all three varieties of the plate of Thomas Gore, the earliest about 1660, the second by Michael Burghere and the third by Faithorne.

The English collector usually, however, finds England a sufficiently wide field, and nowadays, although there is no great upward tendency in prices, it is becoming increasingly difficult to procure the finer specimens, which have always maintained a price. On the whole, modern designs are not nearly so interesting, but there is one artist whose work stands out alone, namely, C. W. Sherborn. He began as an apprentice to Robert Oliver, a goldsmith of Soho, in 1845. In 1852 he was admitted a Freeman of the City of London, by virtue of his services tot the Company of Goldsmiths. After spending three years in Geneva as a designer and goldworker, he returned to London where he still followed his calling, but gradually deviated toward another branch of art, engraving, etching and designing Book-plates. Throughout his career, on this special subject his work retained a wonderful excellence, some of the plates having a depth and tone of richness unsurpassed. A catalogue of his plates compiled by himself and Mr. G. H. Viner is given in a sketch of his life and works by his son. Mr. G. H. Viner himself has an exceedingly fine collection.

This being Coronation year, it is pleasing to look back on a similar event in 1902. In that year, by Royal permission, was published a set of three plates, to be sold for the benefit of King Edward's Hospital Fund. The largest plate contained the Royal Arms within the Garter, with supporters, crest and Imperial Crown, with E. R. at the sides, and the Union Badge below the Shield; inscribed "Royal Library, Windsor Castle." The third plate has the Royal Crest only, a lion statant guardant on an Imperial Crown, with the letters E. R. as before, and the inscription as in the second plate, on a scroll below. Only 50 sets were issued at the price of £8-8-0 per set, and must by now have become exceedingly rare.

There is a fair amount of literature on the subject of Ex-Libris, most of which is obtainable without much trouble and at reasonable cost.

Posted by Jerry Morris on Sunday, December 16, 2012 No comments: