Res judicatae is a legal term for matters that have already been adjudged. The term was used as part of the title of a book by Augustine Birrell: Res Judicatae: Papers and Essays, London, 1892. 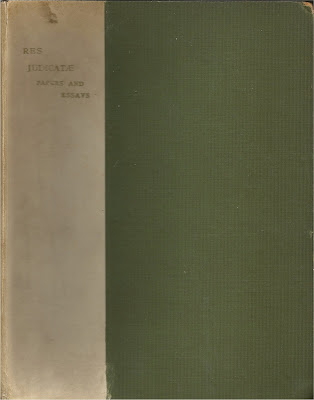 Augustine Birrell (1850-1933) was an English politician, an author, and a lawyer. Birrell's first book, Obiter Dicta, was not about legal matters. And except for one essay, "Authors in Court," neither is Res Judicatae. This book contains biographical essays and other papers by Birrell which were previously published in Macmillan's Magazine, the Reflector, Scribner's Magazine or the newspaper, the Speaker. 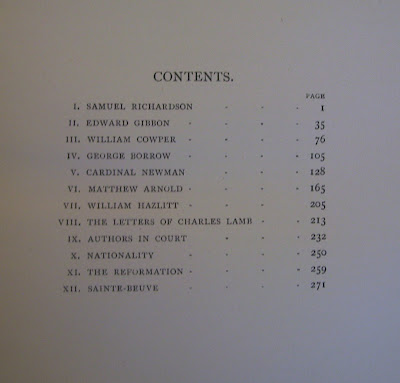 Birrell's book is the newest addition to My Sentimental Library Collection. Tracing the provenance of this copy, researching the players involved, and telling you all about it, has brought me hours of enjoyment. And hopefully, reading this post will bring you more than a few minutes of enjoyment.

Edwin B. Holden (1861-1906) was the first owner of my copy of Res Judicatae. He lightly pasted his bookplate to the front pastedown: 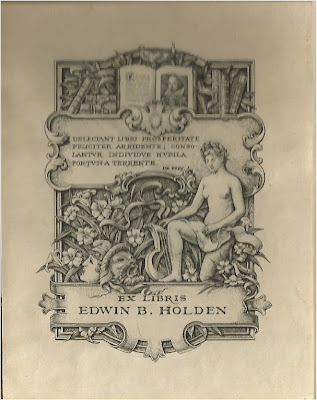 Edwin B. Holden was the seventh President of the Grolier Club, and the first to die in office. A lover of fine bindings and prints, Holden was a founding member of the Club Bindery and the Society of Iconophiles.

The Club Bindery was created in New York City in 1895 to offer American book collectors European-quality hand bookbinding. An inexpensive and interesting book to read about the Club Bindery is Fine Binding in America: the Story of the Club Bindery, by Elbert A. and Lawrence S. Thompson, Urbana, 1956.

About Holden, the Thompsons write:


Of the lesser bibliophiles of the age of Hoe, special mention should be made of Edwin Babcock Holden, the original guiding spirit of the Club Bindery. Had not Holden passed away at the early age of forty-four in 1906, he might well have become a collector whose shelves would have rivalled Hoe's.... 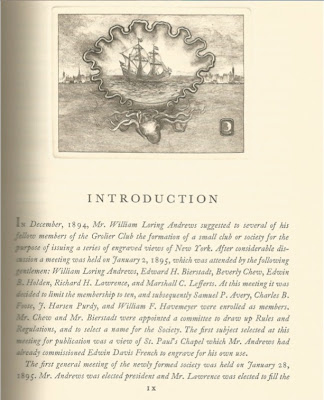 Holden's personal library consisted of first editions of British and American literature, French illustrated books, fine bindings, and early American printing. He had the second and fourth Shakespeare folios, the first folio of Spenser's Faerie Queene, and numerous first editions of Donne, Herrick, and Thackeray. He also owned examples from the Dove, Vale, and Daniel presses, as well as complete runs of volumes issued by the Grolier, Caxton, and Rowfant clubs. Although the Holden print collection was sold shortly after his death, the major portion of the library did not appear on the auction market until 1920. The sale prices were satisfactory, with Rosenbach, Drake, Hill, and Wells competing for the fine bindings and first editions. Holden's place in the history of American book collecting is closely associated with the Grolier Club. Through that organization, he promoted high standards in the graphic arts. 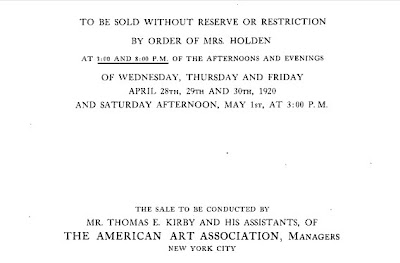 Now this intrigues me: The lot containing Res Judicatae was sold at auction on April 28, 1920. And exactly sixty-seven days later, on July 4, 1920, Augustine Birrell inscribed this book for Theodore Roosevelt's son, Kermit Roosevelt, and his wife Belle: 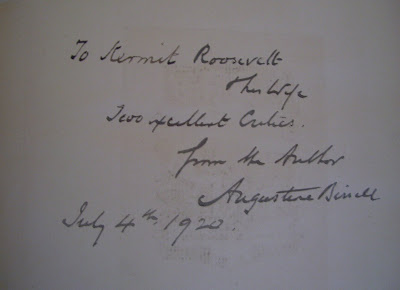 How did this book get from the auction house in New York City to Augustine Birrell's hands in London? Did Birrell assign A. S. W. Rosenbach, James F. Drake, Walter M. Hill, or Gabriel Wells to acquire the book and mail it to him? Or did one of the booksellers acquire the book for Kermit Roosevelt, who sent it to Birrell for his inscription?

Essays, particularly Birrell's essays, were quite popular near the close of the nineteenth century. And Augustine Birrell wouldn't be the first author who had to buy a copy of one of his own earlier works on the open market in order to give somebody a copy. My money is on Birrell. 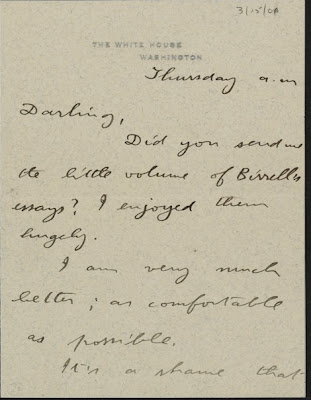 
In 1894, Anna Roosevelt Cowles, Theodore Roosevelt's older sister, who he affectionately called "Bye," wrote that she met Augustine Birrell (Her husband was the Embassy Secretary in London). Roosevelt began his next letter to Bye with these words:


Meet Birrell he did. In May 1910, President Taft appointed Theodore Roosevelt as the special ambassador to represent the United States at the funeral of King Edward VII. During his brief stay, Theodore Roosevelt met Augustine Birrell for lunch:

From Google Books Theodore Roosevelt: His Life and Work


In his inscription to Kermit and Belle Roosevelt, Augustine Birrell calls them "two excellent critics," inferring that he corresponded with them about literary matters. He did. Their correspondence is in the Library of Congress:


Although Kermit Roosevelt joined the British Army in 1917, I could find no record that he ever met Augustine Birrell. Nor does Birrell mention any of the Roosevelts in his autobiography, Things Past Redress, published posthumously in London in 1937. Kermit Roosevelt served in the British Army during WWII as well, but suffered bouts of alcoholism, depression, and malaria and was discharged. His cousin, FDR, managed to get Kermit a post in Alaska as a U.S. Army intelligence officer. But Alaska became Kermit's final resting place; he committed suicide by gun in 1943. 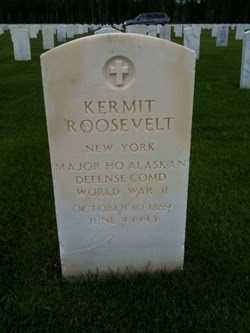 
Belle Roosevelt survived her husband by over twenty years, passing away in New York on March 30, 1968. Her home, 9 Sutton Place, New York, New York, was auctioned off in November 1968. As for the copy of Res Judicatae, it may have stayed in the family because it didn't resurface until 1992. Res Judicatae was listed for sale in the Nov.2, 1992 issue of AB Bookman's Weekly by Pharos Books, New Haven, Ct.

My copy of Res Judicatae appears next twenty years later in an auction in Amherst, N. H. in a lot with other books either by or belonging to the Roosevelts: 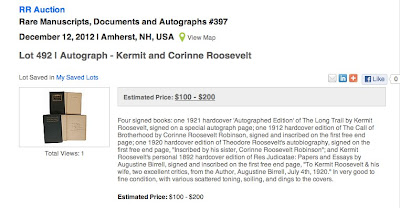 Less than a month later, Res Judicatae appears on eBay. And I submit the winning bid:

And that, my friends, is the history of my copy of Res Judicatae, the newest addition to My Sentimental Library Collection.