In And About Foley


In the Library Thing catalogue of my library,  I have 149 works that I classify under bibliography.   But not all the books I identify as bibliographies are bibliographies.   Some are just either lists of books or books about bibliographies.  Beverly Chew, one of the early members of the Grolier Club, would not have approved.  In an article published in the August 1897 issue of the Book Buyer, Beverly Chew reviewed P.K. Foley's work,  American Authors 1795-1895:  A Bibliography of First and Notable Editions Chronologically Arranged With Notes, Boston, 1897: 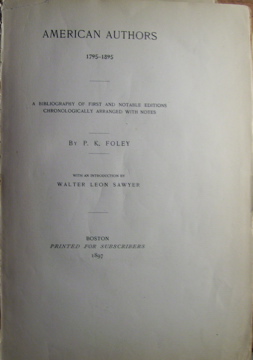 Chew believed Foley's work was not a bibliography, but was just another checklist of the works of American authors.  "A most serious defect," according to Chew was that Foley omitted the names of the publishers in the listings of the books.

If that is the case, then  the following works in my library by Merle Johnson, B.M. Fullerton, Jacob Blanck, and Wright Howes are not bibliographies either because they all committed this "most serious defect."  To be truthful, Johnson did not classify  his work as a bibliography in 1928.  His title was  American First Editions:  Bibliographic Check Lists of the Works of  One Hundred and Five American Authors.  B.M Fullerton called his  1932 work a bibliography:  Selective Bibliography of American Literature 1775-1900:  A Brief Estimate of the More Important American Authors and a Description of Their Representative Works.  When Jacob Blanck revised Merle Johnson's work in 1935, he expanded it to include 199 authors, but also referred to it as a bibliographic checklist.  Blanck, too, omitted the names of the publishers.  Then there is Wright Howes's book, first published in 1954 and revised and enlarged in 1962:     U. S. I A N A (1650-1950): A Selective Bibliography in Which Are Described 11,620 Uncommon and Significant Books Relating to the Continental Portion of the United States.  Even Joseph Sabin in the early volumes of the Dictionary of Books Relating to America omitted the names of the publishers. Wilberforce Eames, however, included the names of the publishers in later volumes.  Regardless of Chew's classification, the Library of Congress lists all the above works under bibliography. And Foley's work too!  Even the Grolier Club itself lists Foley's work under bibliography!  Unfortunately,  Publishers' Weekly didn't do the same in its article announcing Foley's death.  Foley's obituary begins, "P.K. Foley, Boston book dealer and author of the widely used check list on 'American Authors' in their first editions, died on April 13th after a long illness..." 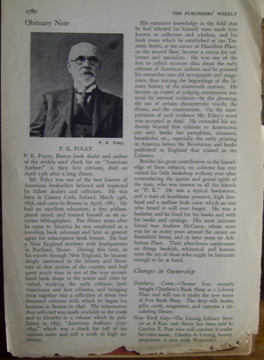 Chew also wrote that the readers would be disappointed in Foley's work.  One reader who was not disappointed was the Philadelphia bookseller William J. Campbell (1850-1931).  Campbell may have been the original subscriber of this very copy of the book, but at the very least, he acquired it sometime before April  1915.  This postcard was inserted in the book with notes on the other side: 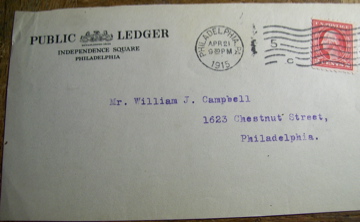 Another satisfied reader and former owner of this copy of Foley's bibliography was the New York City bookseller Christian Gerhardt (1866-1955).   He acquired this copy of the book sometime before April 1920.  The letter below is from a sub-dean at Harvard and was loosely inserted in the book: 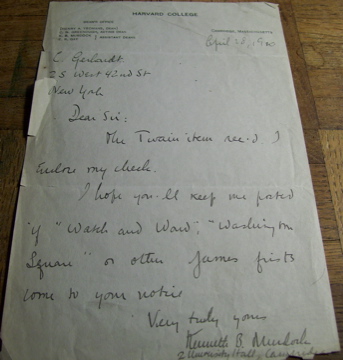 Gerhardt  signed his name on one of the rear free endpapers.   The address, I believe, is his home address, and not one of the several addresses where his bookstore was located. Both booksellers had a high regard for P.K. Foley, and referred to his work extensively.  Foley was a Boston bookseller who gained his knowledge of American first editions with fifteen years of experience first as a traveling book salesman and then as  the agent for subscription houses.  He visited many a bookstore in his travels.  His bibliography became a bible of sorts and provided a ready reference for himself and for his fellow booksellers.   "Not in Foley" was a term used by more than a few booksellers in the early 1900s to identify a book that was not listed in Foley's bibliography.

The rear cover of one of P.K. Foley's bookseller catalogues serves as an advertisement for his bibliography: 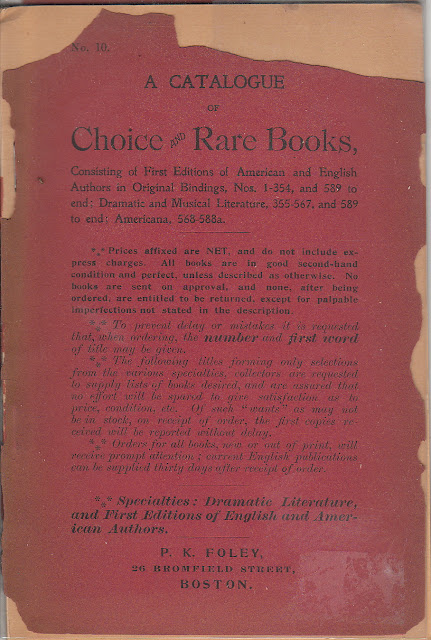 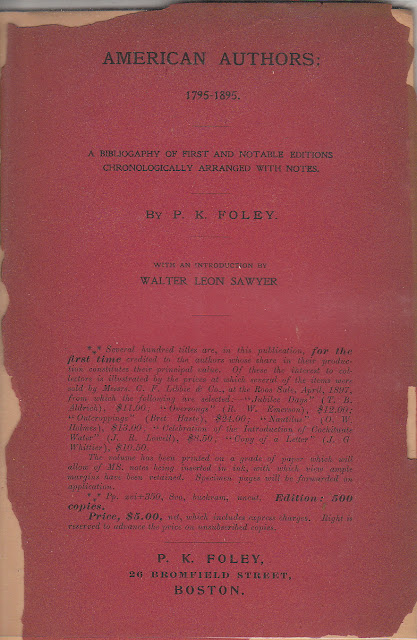 A circa 1920s American Autograph Shop listing from Ridley Park, Pa. provides some interesting information about a large paper edition and the trade edition of Foley's bibliography: 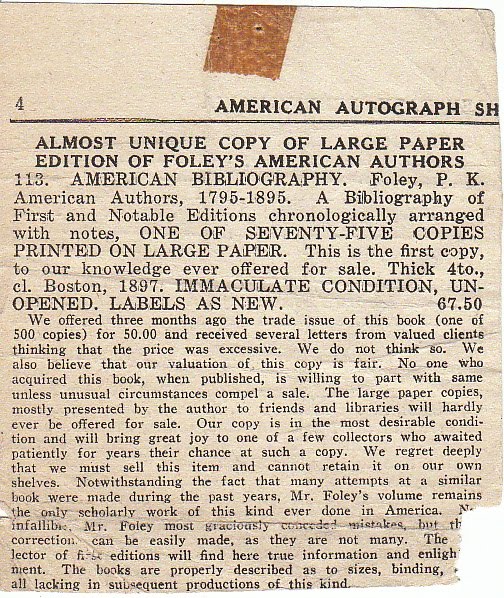 My copy is a large paper edition: 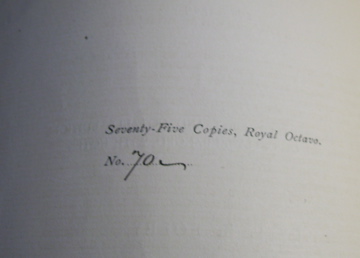 Besides having a copy of P.K. Foley's  bibliography and a copy of one of his bookseller catalogues, I also have a copy of the auction catalogue of his library. 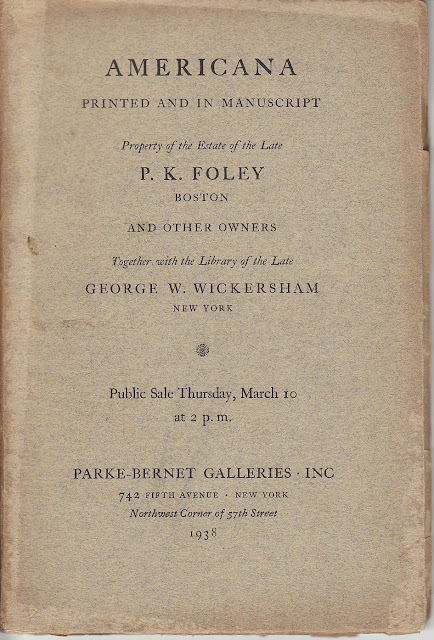 As one would expect, Foley's library was rich in books about books: 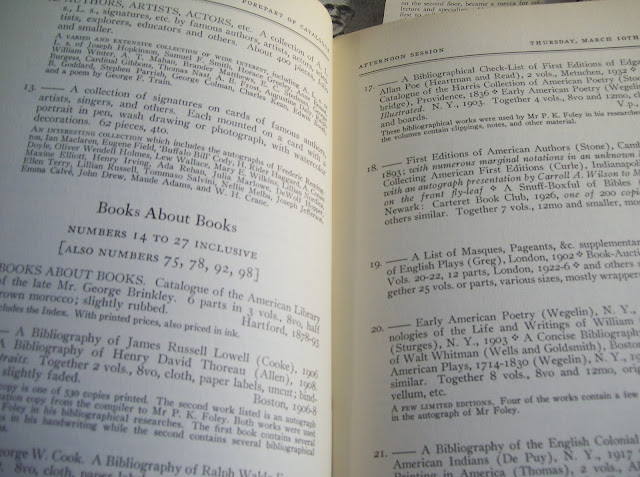 I like the listing of Foley's copy of his own bibliography:"... The volume is replete with clippings, manuscript, and other material relating to American authors." 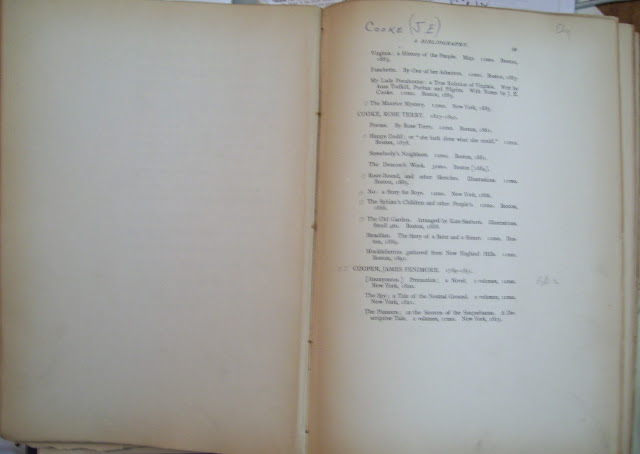 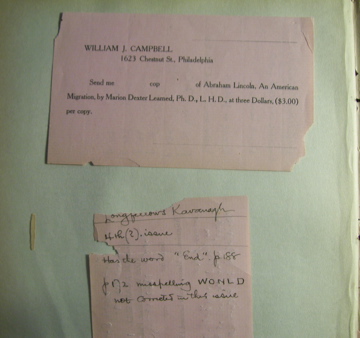 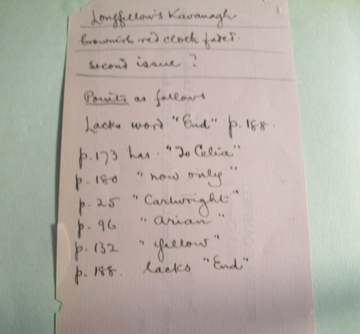 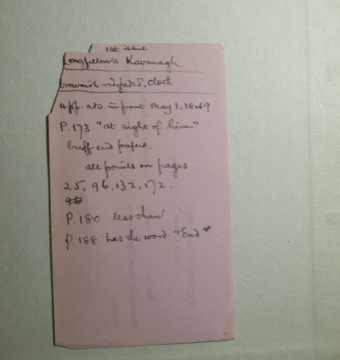 Christian Gerhardt, on the other hand, either inserted or pasted numerous – and I mean numerous – articles and "bibliographic checklists" from Publishers' Weekly.   Gerhardt was still active in bookselling in 1949 when he was hospitalized for a serious ailment at the age of 83.  At that time, AB Bookman's Weekly called him the "Dean of American Antiquarian Booksellers." 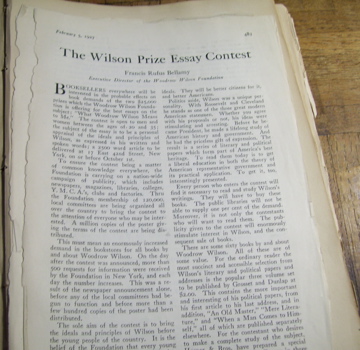 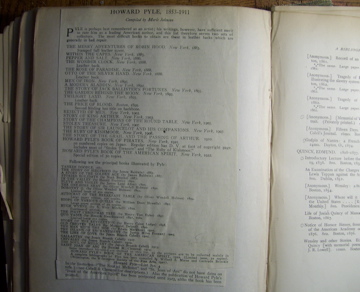 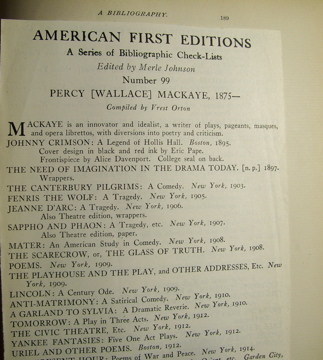 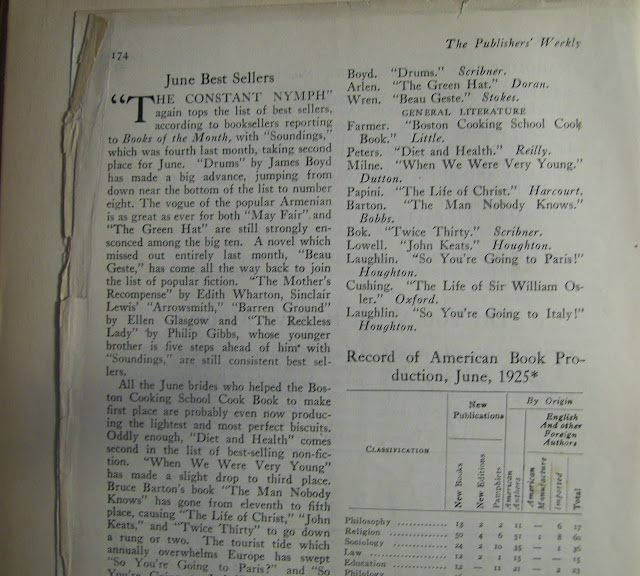 If Merle Johnson's name sounds familiar, it is because he published his bibliographic checklists in Publishers' Weekly before publishing them in a book. 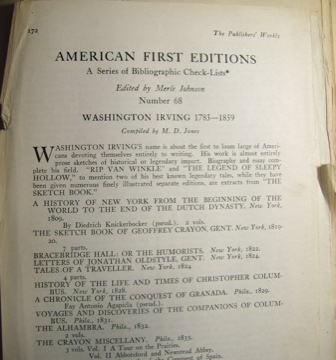 Gerhardt even loosely inserted clippings from catalogues, a practice which  has added to a nightmare I am facing. 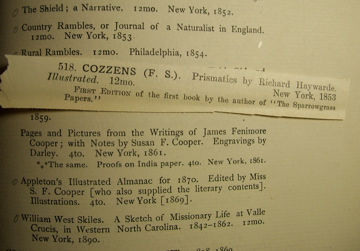 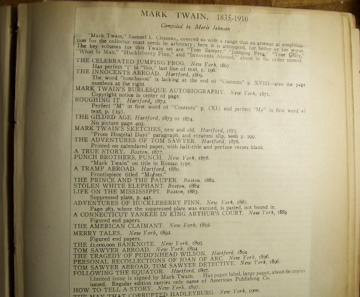 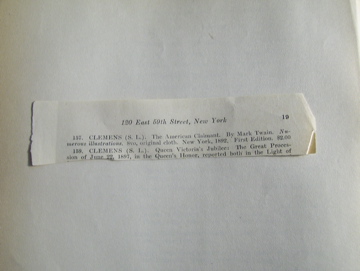 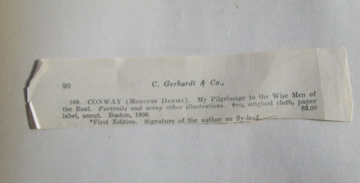 There are bibliographic notes on the other side of this calendar sheet. 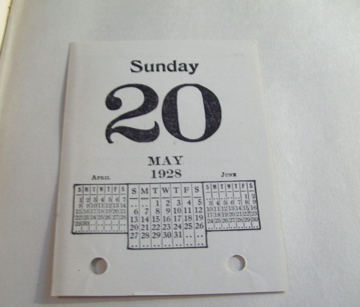 There are so many loose inserts that I have moved some of them to the back of the book for the time being. 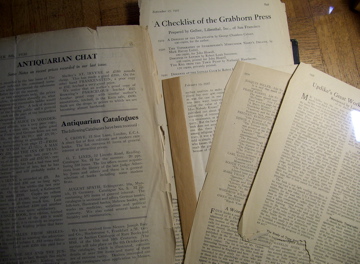 Below is a 1930 letter from Houghton Mifflin Company.  The year 1930 is significant because that is the year Gerhardt went to the penitentiary for six months.  An undercover detective found a flyer for Flesh and Other Stories by Clement Wood in Gerhardt's bookstore.  The flyer displayed an illustration of a bare-breasted woman with several strands of pubic hair in view.  Gerhardt was convicted on obscenity charges. 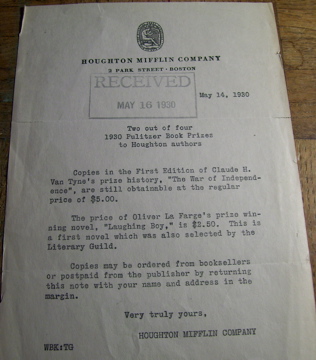 The letter, above, loosely inserted, is the last dated entry in the book.  I know Gerhardt continued in the book business, but I don't know if he still had the book when he was released from prison.  I bought the book on eBay in the early 2000s from a professional bookseller whose name I can't recall.

Finally, here is the reason why all these loosely inserted sheets are giving me nightmares: 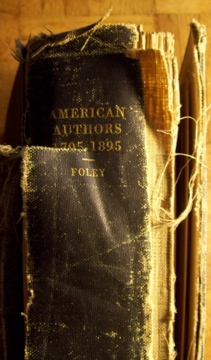 The binding is in tatters.  Some of the sections are loose.  There are well over one hundred inserts.  The book has been on my bookbinding pile for almost a decade.  I need to rebind the book, but somehow keep the inserts where they are.  I'm going to rebind this book in November.  Wish me luck!
Posted by Jerry Morris on Friday, October 21, 2011 No comments: