Last Christmas I started a custom in which I will post one of Walter Harris's Twelve Contributions to Biblionotes on My Sentimental Library blog. Last year's topic was "Ex-Libris" and this year's topic is "Chapbooks." Both pieces were written in the 1950s.

By now you must be wondering who Walter Harris is and what Biblionotes is. And I have yet to mention bibliomites. To provide background information for you, I posted "About Bibliomites, Biblionotes, and Walter 'Wally' Harris" on my Biblio Researching blog. I recommend you click on the link and read that blog post first. There will be a link at the end of it to return you to this blog post.

To make it easier to read for you, I have printed "Chapbooks" in its entirety below the image of the typescript page. 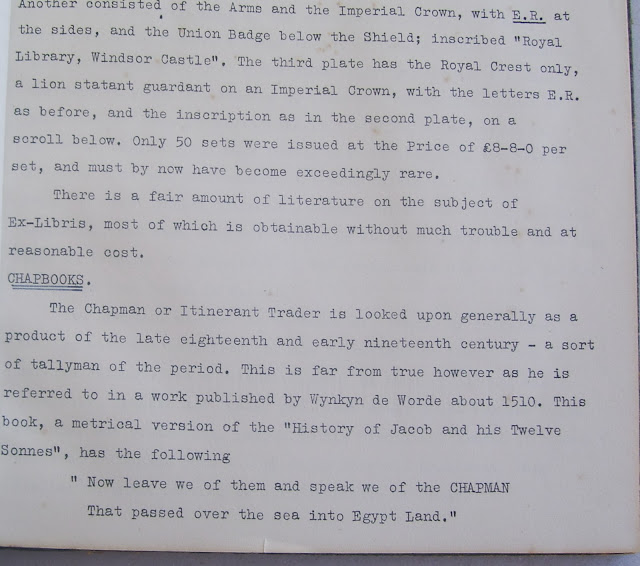 The Chapman or Itinerant Trader is looked upon generally as a product of the late eighteenth and early nineteenth century –– a sort of tallyman of the period. This is far from true however as he is referred to in a work published by Wynken de Worde about 1510. This book, a metrical version of the "History of Jacob and his Twelve Sonnes", has the following

"Now leave we of them and speak we of the CHAPMAN
That passed over the sea into Egypt Land."

Shakespeare later on has two references, one in Love's Labour's Lost

"Beauty is bought by judgment of eye
not uttered by base sale of CHAPMAN'S tongues."

And the other in Troilus and Cressida

"Fair Diomed, you do as CHAPMEN do,
Dispraise the thing you desire to buy."

About the beginning of the sixteenth century there were circulating in France, a large amount of Farces, Tales, Almanachs, etc., consisting of just a few pages lightly stitched together, and carried round the country by itinerant booksellers known as colporteurs: later, publications of a similar nature began to appear in England, but were mostly translations from the French. It seems that the Chapmen were the sole purveyors, the little books being at first called Chapmans – books, which later developed into Chapbooks, and such they were named up to about 1840-1850, when this type of reading was displaced by the periodicals and family journals which had then begun to appear.

The Chapman, whether he be a wanderer, tramp, or tradesman, toiling with his pack from village to village to lonely farm or wayside cottage, was a welcome figure. He usually carried cheap jewellery, ribbons and laces, and other small items besides books, ballads, and broadsides. Lavron in his "Cries and Habits of London" depicted a Chapman with a tray slung from his shoulders, very similar to those carried by street-traders of today.

It is uncertain when the term Chapbook first came into use, but probably between 1650 and 1700. They were uninviting looking things crudely printed on bad paper, and decorated more often than not with a lurid coloured frontispiece and villainous woodcuts. Those issued in the seventeenth century dealt mainly with History, Legends, Shipwrecks, and Travel, whilst those that come later covered almost every subject imaginable. For boys there were tales of action and adventure, for the most part luridly sensational; for girls, stories of a rather sentimental domestic nature; and for older people, tales, stories, songs and valentines, pattern books, riddles and jest books, and a series of pious stories redolent with brimstone and Hell-fire. They were adapted to every kind of reader by their great variety and their cheapness, prices usually being one penny, sixpence, and one shilling. Some of the jest books were rather on the spicy side, full of coarse witicisms, but there were shades of humour to suit all classes.

The historical section had a very wide range, and included many favourites such as Joseph & his Brethren, Fair Rosamund, Charles the Martyr, Guy of Warwick, Sir Richard Whittington, Wat Tyler and Jack Straw, The Conquest of France, Elizabeth and Essex, and a host of others. The mythological, supernatural, and superstitious were well represented, as also were the humourous ones, especially those dealing with Courtship, Marriage, etc. A few of the more amusing in the latter category are "A York Dialogue between Ned and Harry," which gives a description of the courtship and marriage of a tradesman and a chambermaid; "The French King's Wedding or the Royal Frolic , being a pleasant account of the Amorous Intrigues, Comical Courtship and Surprising Marriage Ceremonies of Lewis XIV"; "Taffy's Progress to London: With the Welshman's Catechism", (this has a large woodcut depicting Taffy being pushed along in a wheelbarrow by his wife, with the baby strapped on her back); "Long Meg of Westminster" a story of her life and merry pranks, probably founded on fact; "Joaks upon Joaks, or No Joak like a True Joak together with, The diverting Fancies and Frolicks of Charles 2nd and his three Concubines." The period 1750-1850, seems to have been the most prosperous, for these queer little booklets teemed from the printers. They emanated from most of the larger towns including, London, Glasgow, Edinburgh, Dublin, York, Birmingham, Worcester and Coventry, whilst smaller places like Paisley, Kilmarnock, Penrith, Aylesbury, Falkirk, Cirencester and others sent out regular if somewhat smaller consignments. London seems to have held the lead, with firms like Cluer and Dicey (the largest of them all), J. Dalton, T. Bland, J. Read, A Hind, Evans, Bettesworth; and in later years, Fairburn, and William Hone. In York was Kendrew; in Newcastle, J. White and Angus & Son; Nottingham, J. Burbage; Coventry, Turner and Morgan. Practically all the Chapbooks were issued anonymously, nor is very much known concerning the persons who executed the woodcuts. Many of the cuts were used for one or more books, as for instance, the cut designed for "Jack and the Giants" is also found in "David and Goliath"; another one represents both Miss Davis and Moll Flanders; yet another serves its purpose in Valentine and Orson and Fortunatus.

About 1830-1840 this type of reading began to fade away, but whatever may be said of these curious little scraps of literature, they played their part and served their purpose of providing congenial reading at a low price. It is now recognized that a great deal of the social life and habits, tastes and ides of past centuries can be gleaned from the Chapbooks they read. They are getting increasingly scarce, consequently there is a desire to possess these humble little books which are worth many times their small initial price. These fore-runners of the modern thriller, usually depending on sensational details for their appeal, are in common with most publications in paper covers, rarely met with in their original state.

As a whole, the subject of Chapbooks has never been adequately dealt with, the existing reference books confining themselves to special periods. Mons. Nisard in his "L'Histoire des Livres Populaires ou de la Litterature des Colporteurs", deals very fully with the early French publications, and John Ashton in "Eighteenth Century Chapbooks" has done a wonderful job in producing an amusing and instructive book, which gives a very representative list of these booklets with facsimiles of the woodcuts. Other quite useful works are Halliwell-Phillipps "Notices of Fugitive Tracts and Chap-Books", 1849; and the two volumes issued by Andrew Tuer, "Forgotten Children's Books", and "Children's Books of Yesterday".

There are collection of Chapbooks in the British Museum and the Bodleian Library, but probably the largest collection in the world is at Harvard University Library.

And here is a link to last Christmas's blog post on Ex-Libris.

Posted by Jerry Morris on Monday, December 23, 2013 No comments: