Each year, as a Christmas gift to my readers, I post one of  Walter "Wally" Harris's twelve articles as it appears in his Contributions to Biblionotes.  This year's number is titled "Miniature Books."  Enjoy!

"Miniature Books" is an article about miniature books that Walter "Wally" Harris printed for the Bibliomites in the 1950s.  When he died in 1982 at the age of 88, the Antiquarian Book Monthly Review  (ABMR) referred to him as one of the three most knowledgeable bookmen who ever lived.  But except for Biblionotes, not much has been written by or about Walter Harris. 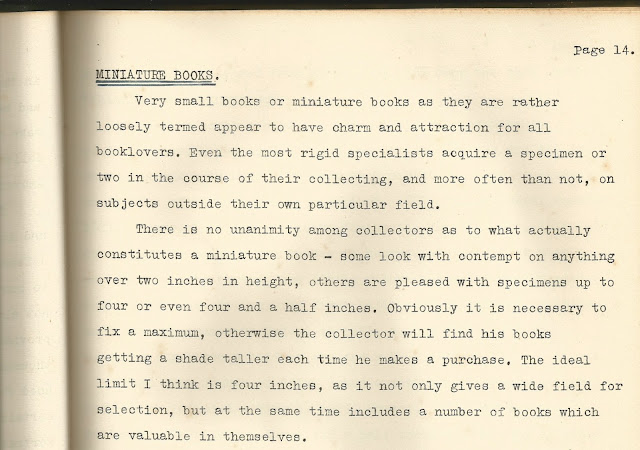 Very small books or miniature books as they are rather loosely termed appear to have charm and attraction for all booklovers.  Even the most rigid specialists acquire a specimen or two in the course of their collecting, and more often than not, on subjects outside their own particular field.

There is no unanimity among collectors as to what constitutes a miniature book - some look with contempt on anything over two inches in height, others are pleased with specimens up to four or even four and a half inches.  Obviously it is necessary to fix a maximum, otherwise the collector will find his books getting a shade taller each time he makes a purchase.  The ideal limit I think is four inches, as it not only gives a wide field for selection, but at the same time includes a number of books which are valuable in themselves.

The sixteenth and seventeenth centuries, usually looked upon as a period dominated by bulky folios, yield a surprising number of small volumes.  The Aldine Press for instance issued many books, the smallest of which is "Horae in Laudem Beatissimae Virginis", printed in red and black, and issued in 1505 (reprinted in 1521).  Estienne, Plantin, and the Elzevirs are also responsible for a number in small format, but I doubt if any Elzevir as originally published would come within range of four inches.  I have examined a great many of them, and whenever I have  found one within this limit, it has obviously suffered at the hands of the binder.  Estienne issued some beautifully printed books, one of the nicest I have seen is an edition of "The Hymns of Snyesius Cynenaeus", 1568, in Greek and Latin; and from Plantin in 1585 came the rare little "Kalendarium Gregorionum".

Leyden, a great centre for printing in the seventeenth century, where Lopez de Haro, Jacobus Marcus, Moretus and the two Raphelengiens held away, produced many miniature books, including an edition of "Erasmi Encomium Moriae", 1627, "Cunaei Sardi Venales", 1627, "Cicero, De Officis", 1610, "Epicteti, Enchiridian", 1616, all of which were under three inches in height.  Amsterdam was also to the fore in this period, one little volume being More's "Utopia", 1631, a similar edition (the first Latin edition printed in England) made its appearance at Oxford in 1663, a copy recently seen measured three and a half by two and a half inches.

From John Jannon of Sedan comes a series of classics in small form which included a Virgil, 1625, Horace, 1627, and a Greek Testament, 1628, about three and a half inches high, all of which are quite rare.

Many editions of the Psalms in English metre, Bibles, and New Testaments were issued in Great Britain during the seventeenth century, some of which appear in fine needlework bindings, others in an early form of shorthand, one of which by the famous Jeremiah Rich is the New Testament, engraved throughout, and containing a portrait and frontispiece by T. Crosse, issued about 1660.

An extremely curious item which I noted in an old trade catalogue is a Jewish service book entitled "Orden de les Orasions Quotidianas", printed on vellum, and "Probably unique", according to the bookseller's catalogue.  It was without date or printer, and measured two and five eighths by one and five eighths inches.

Gervase Markham, that exceedingly clever maker of books, was responsible for what is probably the smallest of sporting books, an interesting little item with a long title:  "The Young Sportsman's Instructor in Angling, Fowling, Hawking, Hunting, etc. etc., issued at the Ring in Little Britain".  A copy which appeared about two years ago measured approximately two and a half by one and three quarter inches.  Like most of Markham's compilations, it is somewhat of a bibliographical puzzle, and although the Bibliotheca Piscatoria cites an edition of 1652, I am of the opinion that it was issued undated, as I have not been able to trace a single copy with the date.  It was reprinted about 1810 by the same publisher, and about two years later an edition appeared from Worcester, but unfortunately it omitted the section on Hawking, and although quite as scarce as the London reprint, it is not as valuable.  There was another reprint in 1820.

Before going on to the eighteenth century, one or two others are worthy of mention.  John Stow, the former antiquary, published in 1604 an edition of his "Summary of the Chronicles of England", printed in black letter, with  a woodcut border to the title, now a scarce little book in fine state.  There was also a pictorial version of the New Testament which emanated from Augsburg in  1696; several editions of Guarini's "Il Pastor Fido", and A'Kempis, "Imitation of Christ", as well as one or two miniature Books of Hours from Paris.

Comng to the eighteenth century we find publishers like Barbou, Bliss of Oxford, the Foulis brothers of Glasgow (sometimes referred to as the Scottish Elzevirs), all issuing small volumes.  From Barbou came an editon of "The Imitation of Christ", and from the Glasgow firm a pretty little three volume Pindar, 1754.  Belfast, where printing did not begin till about 1694, concentrated more or less on devotional books, and one I have noted is an edition of the Psalms in metre, issued by Patrick Neil.  There is on record a copy dated 1700, beautifully bound in tortoiseshell with silver corners and clasps.  The so-called Thumb Bible (really a condensed history of the Bible), was a very popular little book, about two inches by one inch, and nearly an inch thick in size, containing a number of extremely crude woodcuts.  I think a complete copy in good condition of this little curiosity would be very difficult to find to-day.

T. Boreman, whose imprint was "near the Two Giants in Guildhall", was largely a publisher of children's books and chap books, and among the books he issued was "Gigantic Histories" (size three and a quarter inches by two and a quarter inches), 4 vols. 1741, which comprised "History and Description of the Famous Cathedral of St. Paul's", and "Curiosities in the Tower of London", with woodcuts.  The interesting thing about these little volumes is the fact that they gave a list of the child subscribers, well over one hundred for each book.

The nineteenth century produced rather more miniature books than the eighteenth, and included several series of volumes, of which the best known is Pickering's Diamond Classics, constituting more or less perfection in miniature, printing.  The series, which began in 1820 and ended in 1831, comprised Horace, Virgil, Terence, Catullus and Cicero, in Latin; the Greek Testament, Homer's "Iliad" and "Odyssey", in Greek; a Dante and a Tasso in Italian; and in English, Walton's "Angler", and the Lives, and a Shakespeare in nine volumes which should contain thirty-eight plates, but some sets are without them.

Another publication almost contemporary with the Diamond Classics was Jones's series of poets, running to about fifty volumes (it included a few prose works).  This collection cannot be compared with Pickering's from a typographical point of view, but the printing was clear and easy to read.

The Chap-book publishers, among whom were Oliver of Edinburgh, Richardson of Derby, Day and Mason of London, and the Banbury printers, all followed one another in issuing curious little books with similar titles, such as "The English Warbler", "The New English Warbler", "The Melodist", "The Minstrel", "The Budget of Wit", "The Yule-Tide Song Book", "The Caledonian Song Book", and many other tiny ballad and song books, as well as editions of Dr. Watt's Psalms and Hymns.  It is in fact rather difficult to decide whether these are Chap-Books or Miniature Books, but perhaps it is better to regard them as members of either category.

The Infants Library, published by J. Marshall about 1810, is a charming little series of about fourteen volumes, containing plates and woodcuts, as also is the Cabinet of Lilliput, a series of twelve volumes, each containing one, two, or three stories, with engraved frontispieces, bound in coloured boards, and issued with a wooden box, by J. Harris (successor to Newbury) in 1802.

The French publishers were also very busy with miniature books in the first half of the century, the following being some of the titles noted.  A series with the collective title of Bibliotheque Portative du Voyageur was issued by Fournier of Paris, about 1800.

Other items noted are "The complete Fisher, or the True Art of Angling", by W. Wright, circa 1810; an edition in two volumes, 1844, of Tasso's "Jerusalem Delivered"; Alfred Mill's "Pictures of English History, Roman History, Natural History", etc., 1815-1817; an edition of Leopardi's "Poems", Firenze, 1899; a series of ten fairy stories (under two inches in height) issued by the Paris firm of Pairault in 1896; as well as numerous tiny Bibles, Testaments, Dictionaries, etc. by the well-known firm of Bryce of Glasgow.

Miniature Almanacs should be included here, but I have found them so numerous and so diverse in make-up as to warrant an article on their own, which I hope to do in a future number.