The Collector and The Collected:
Two Typophiles From New York

There are two typophiles from New York in my library: the Collector and the Collected. One was born in Rochester in 1918. The other died in Rochester in 1991. One sold printing equipment and supplies. The other ran two printing firms, one of which belonged to his father. One collected printing presses and books about printing. The other wrote a bibliography of books about printing. One was a witness in a hearing of the Committee on Un-American Activities in the 1950s (he sold printing equipment to the Communist Party). The other was Director of the Printing and Publishing Division of the Department of Commerce in the 1950s. One sold his antique press collection to the Canadian National Museum of Science and Technology in the early 1970s. The other sold his printing equipment company in 1966, and became a graphics arts consultant. One moved to California in the early 1970s. The other moved back to Rochester after he retired. One was a member of the Roxburghe Club and the Book Club of California. The other was a member of the Typophiles, the Goudy Society, and the Grolier Club. Who is the Collector? And who is the Collected?

The Collector is the author of an article about a miniature book exhibit which is reprinted in the pamphlet below. 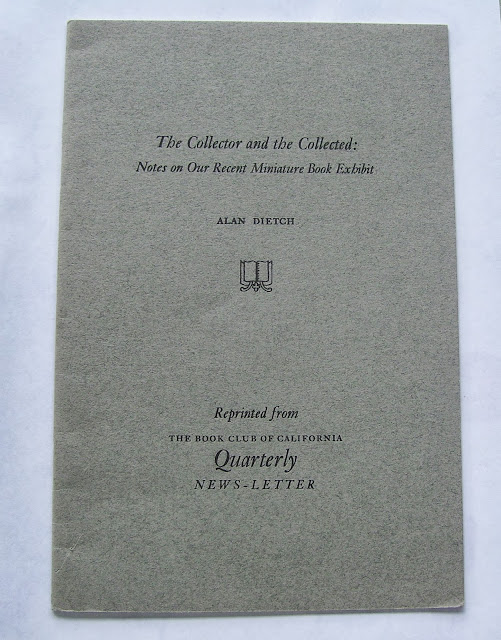 A biographical note in the pamphlet above mentions that Alan Dietch became a collector in 1956. He sold his library in 1999, two years before he died. In the forward to the catalog of his library below, the cataloger writes, "Alan has decided to pass on his collection so that other enthusiasts and collectors will experience the same enjoyment he had in assembling this important history." 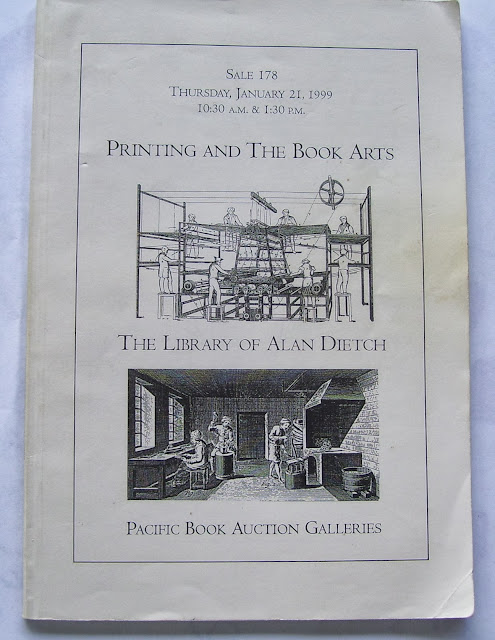 If one diligently researches the archives on the PBA Galleries website, one can find all 531 lots of the catalog of Alan Dietch's library, as well as a list of the prices realized.

I have two books from Alan Dietch's library, neither of which is listed in the library catalog. 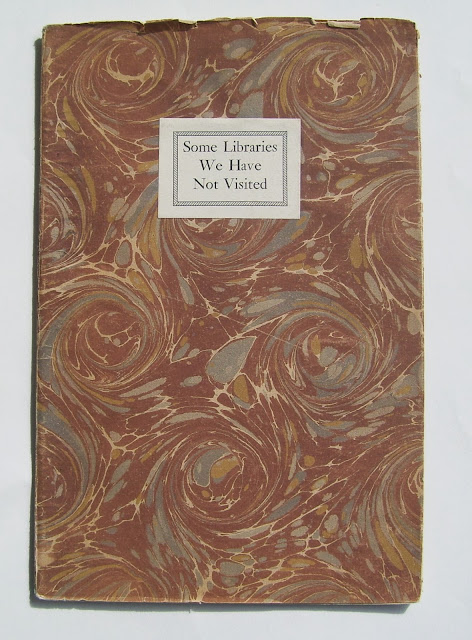 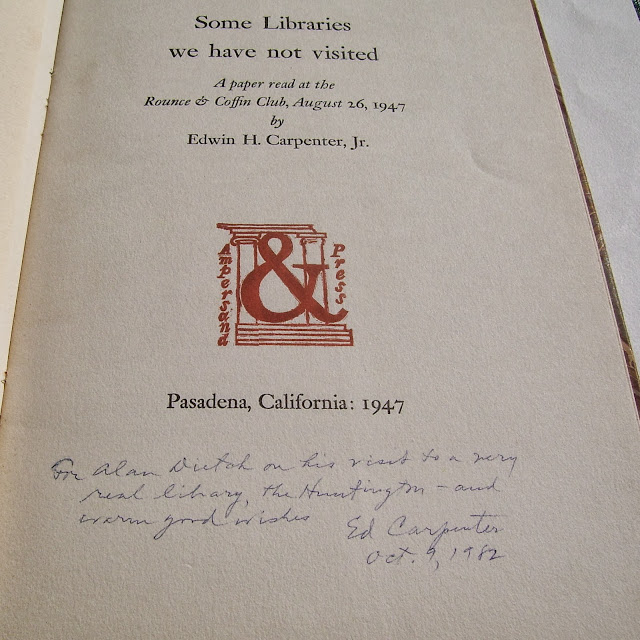 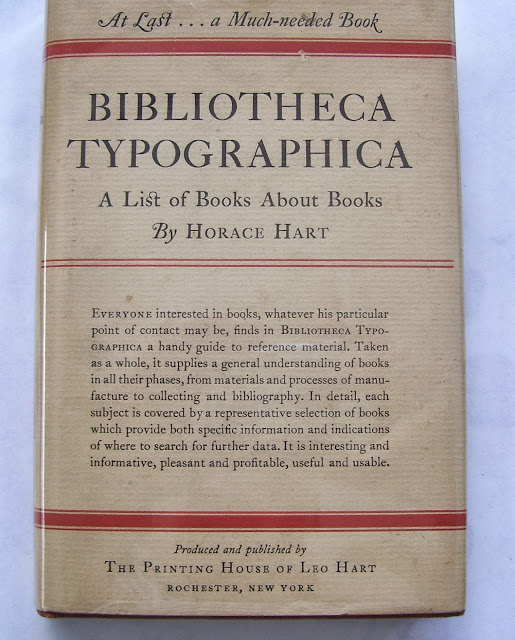 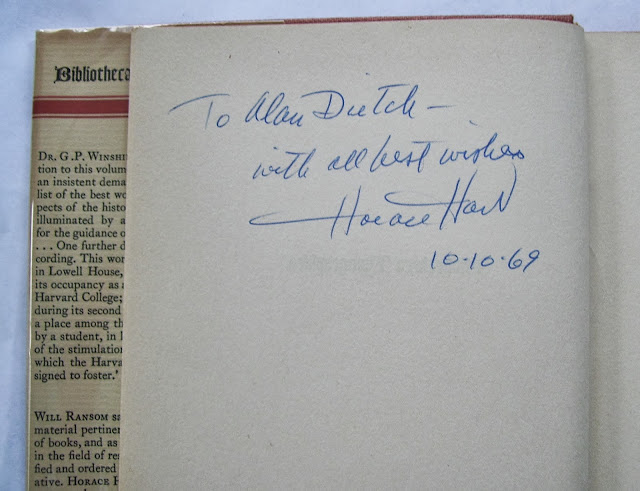 And Alan Dietch inserted a wad of Hartiana inside the book. 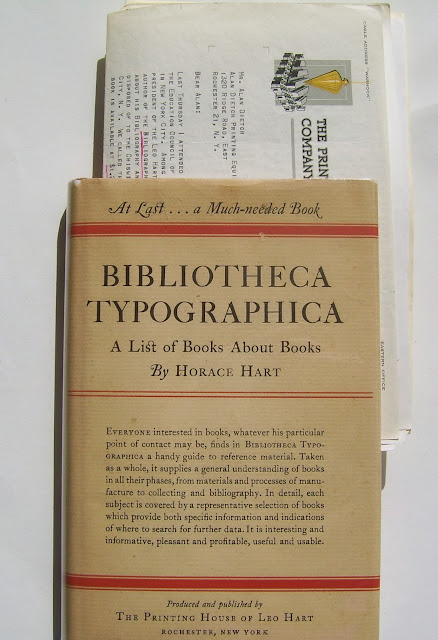 In his Nov 26, 1957 letter to Dietch, Lee Augustine, a fellow collector of books on the history of printing, "introduces" Horace Hart to Alan Dietch, but incorrectly identifies the title of Hart's bibliography. 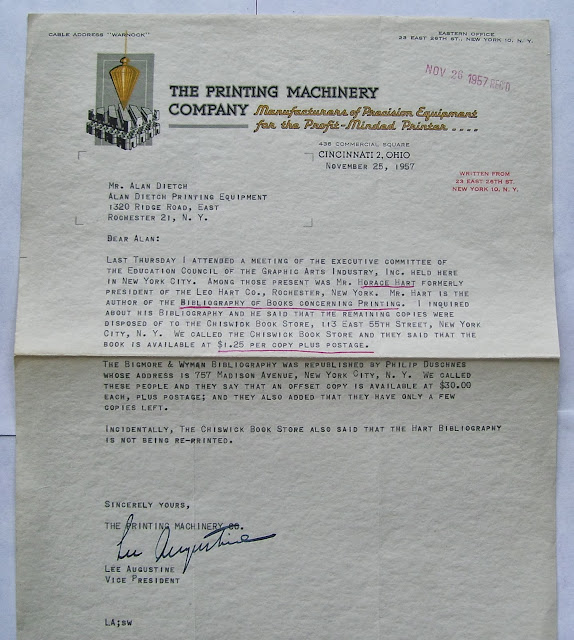 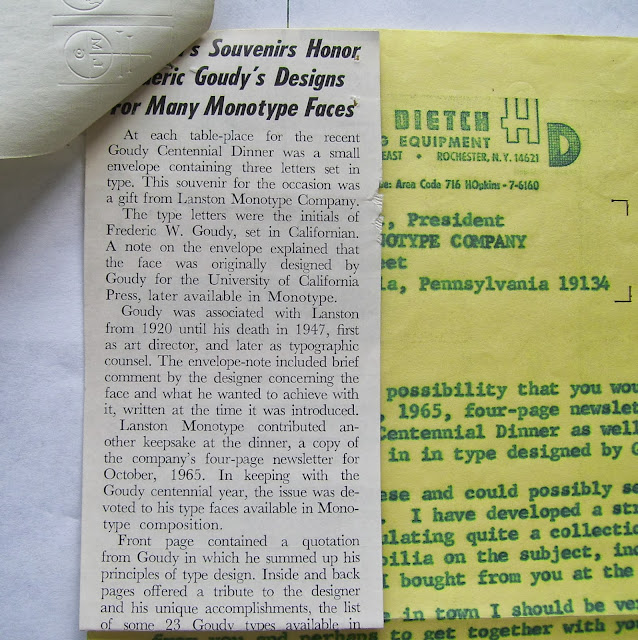 Dietch sees the above newspaper article about the souvenirs given at the Goudy Centennial Dinner, and queries Horace Hart about obtaining them. 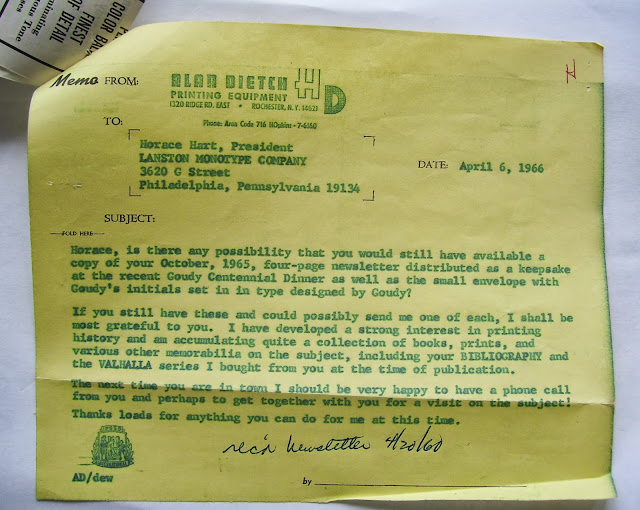 Hart responds and sends Dietch the keepsake, souvenir, and some information about monotype. 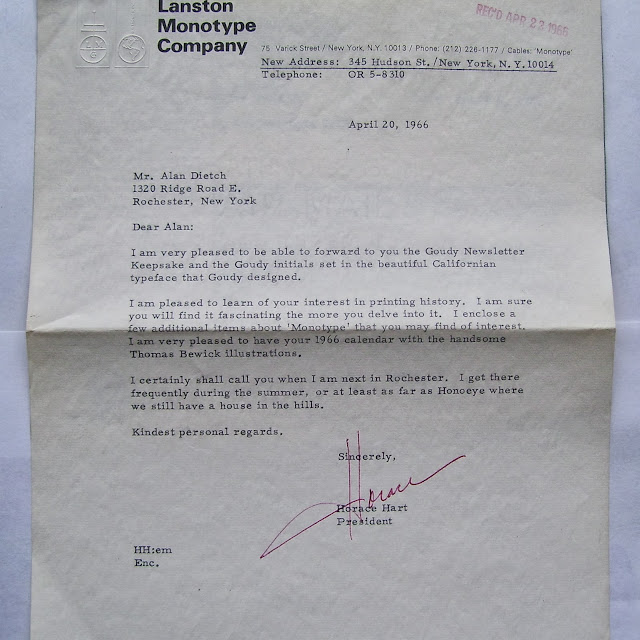 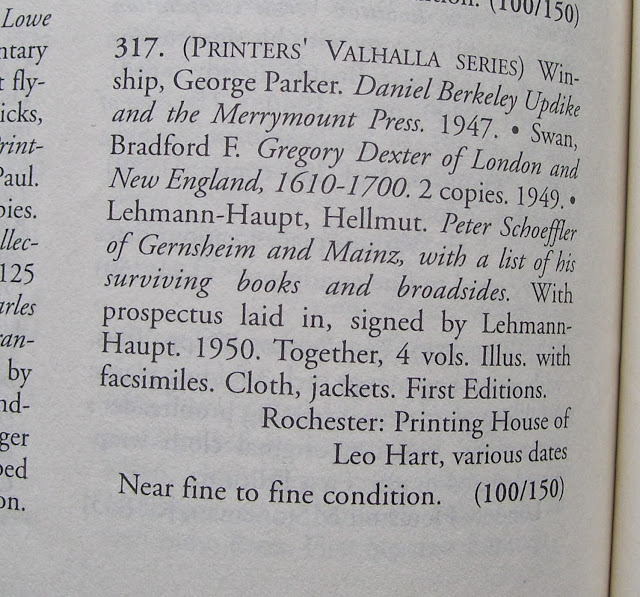 For thirty years, from December, 1965 to December 1995, Alan Deitch collected clippings of listings of both the limited edition and the trade edition of Bibliotheca Typographica from various bookseller catalogs. 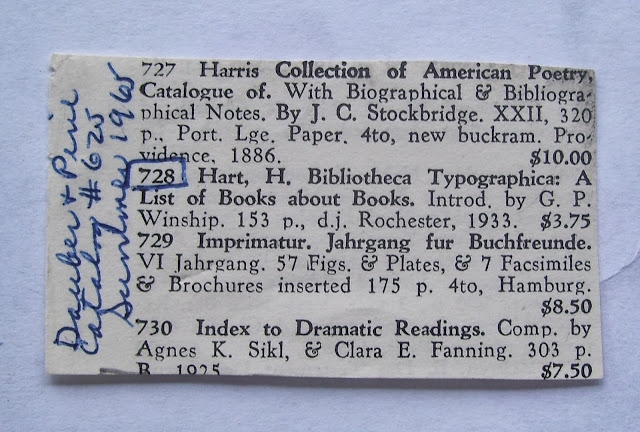 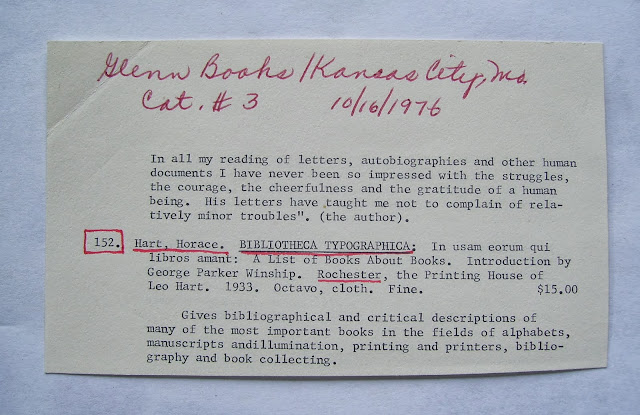 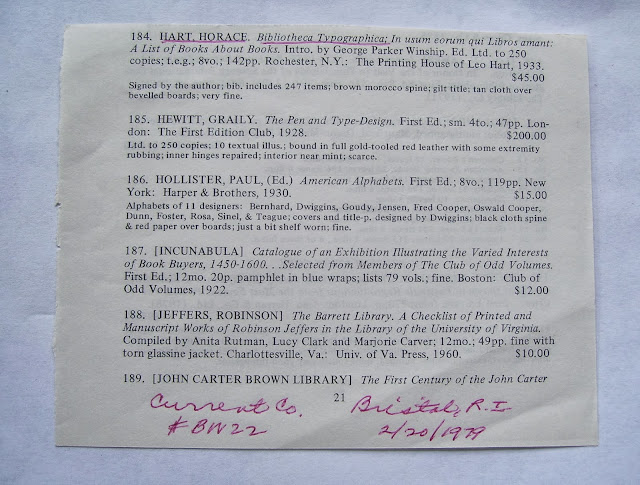 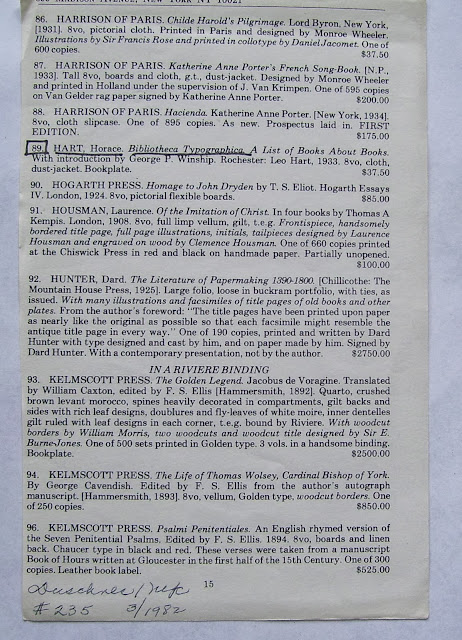 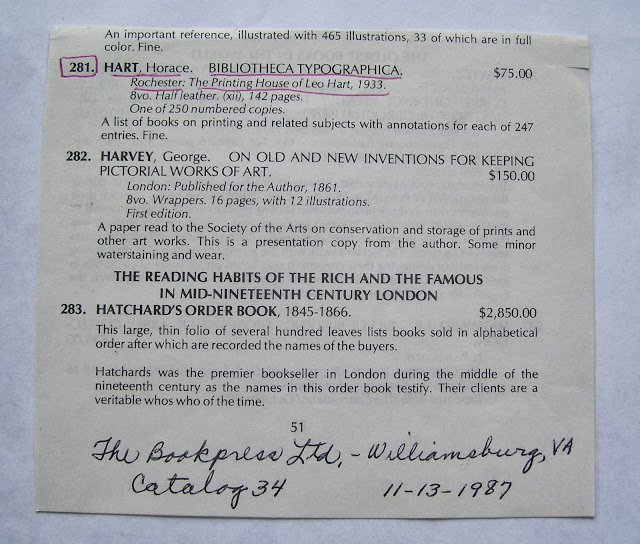 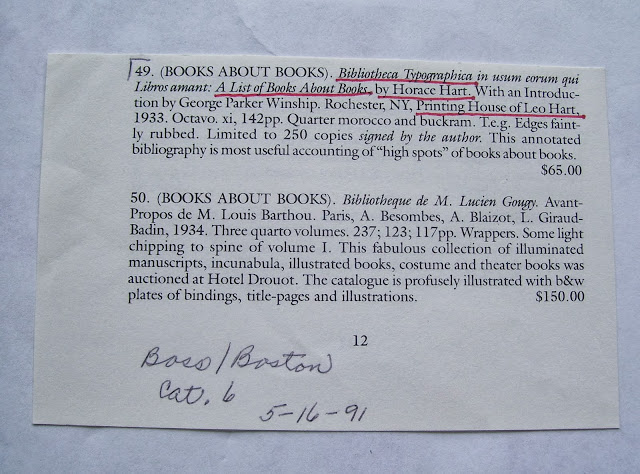 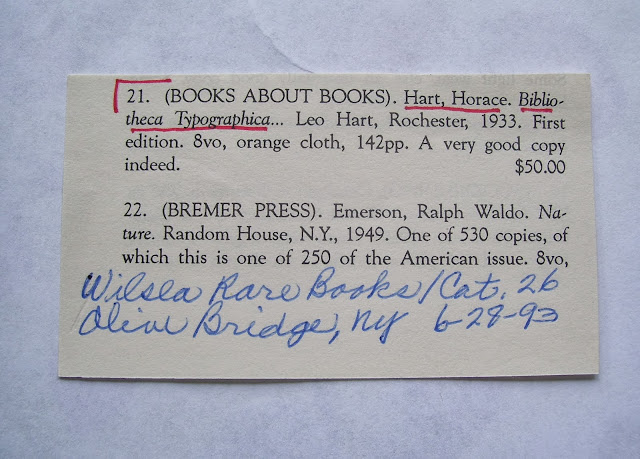 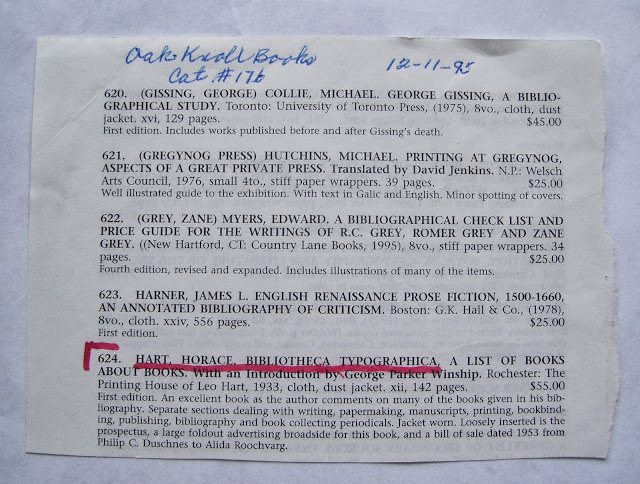 Dietch had two identical Christmas 1987 clippings of Hart's book, A Bibliography of the History of Printing in the Library of Congress, and retained the newspaper clipping announcing the availability of volume two of the work. 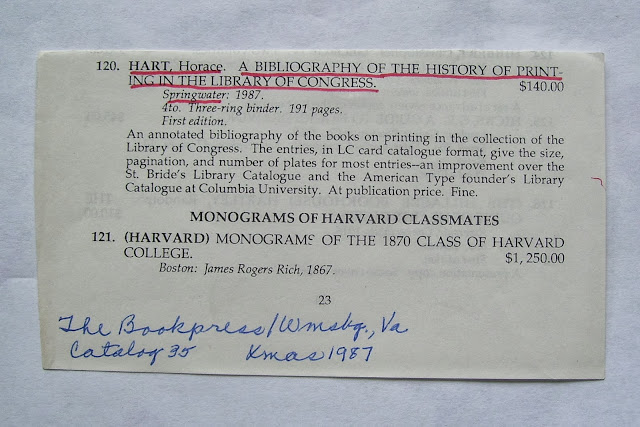 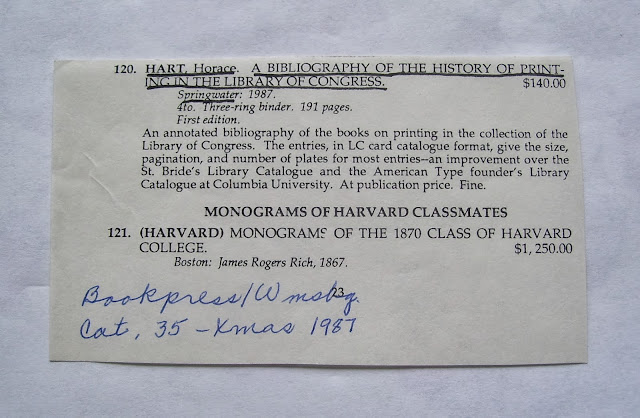 Horace Hart, the Collected, died in Rochester on January 24, 1991. And Alan Dietch collected what obituaries he could find. 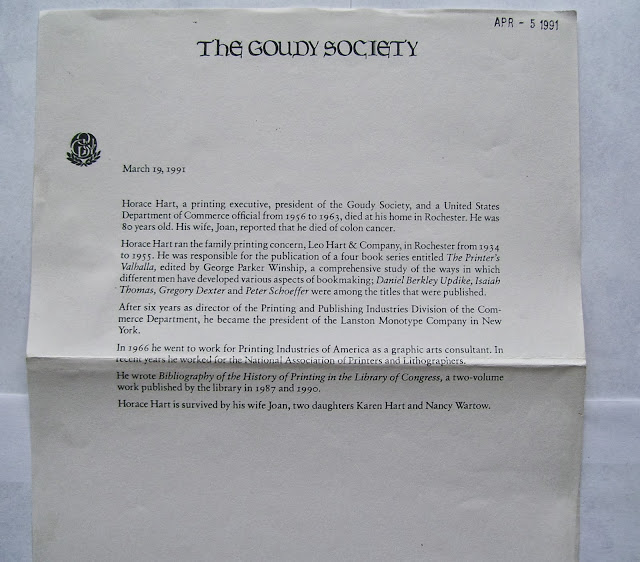 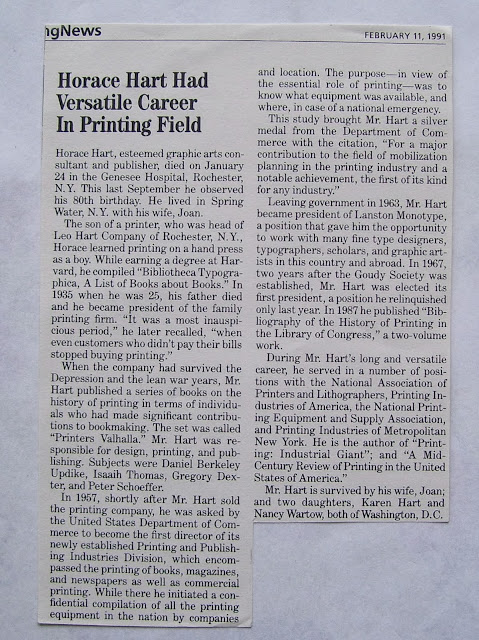 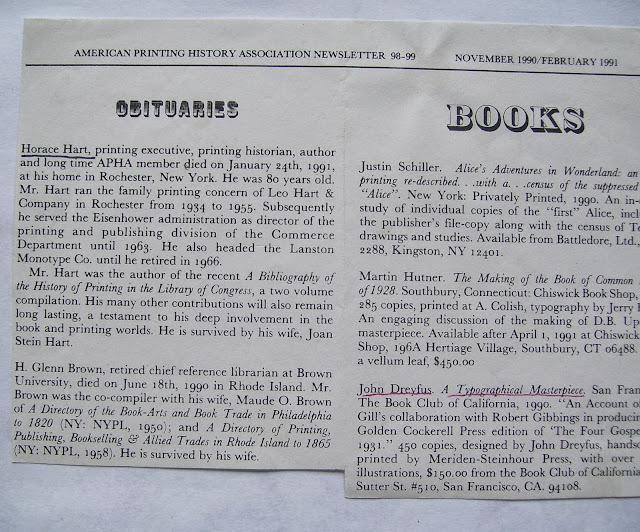 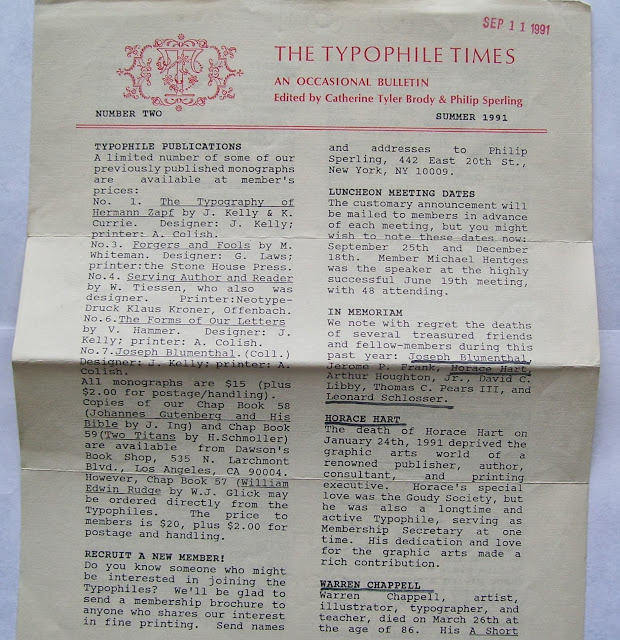