Around the Dining Room Table: A View of My Shakespeare Collection


When I retired from the U.S. Air Force in 1989, I brought back about 200 books from England with me.  More than a handful of these books were books by or about Shakespeare.  I recorded these books in the very first catalogue of my library, citing   how much I paid for each book, and the source, with "B" denoting bookstore, "F" denoting book fair, and "A" denoting auction (the average exchange rate in the late 1980s was about $1.50 per £1). 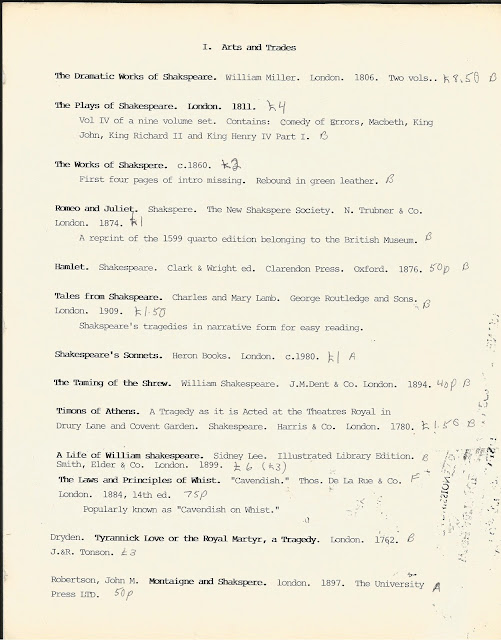 Of these first Shakespeare books, there is nothing spectacular, monetary-wise.  The most I paid for one item was less than $13, and that was for the 1806 set: 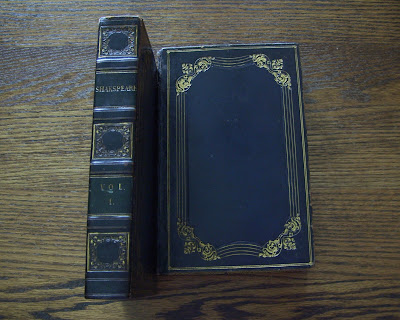 Pleasing to the eye is the front cover of Sir Henry Lee's Life of William Shakespeare, displaying Shakespeare's coat of arms, but the cloth on the spine is badly faded. 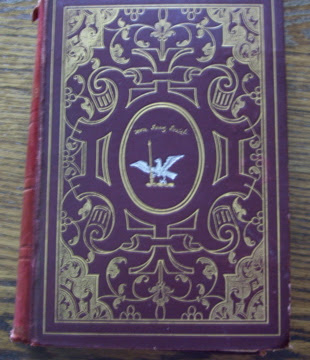 These books that I brought back from England are the cornerstone of my Shakesepare Collection, and have a sentimental value that money can't buy.  Take for instance the third book on the list, the Shakespeare book with the first four pages of Intro missing.  This was my first ever bookbinding project and one of my first Shakespeare books.

These Shakespeare books, and their brothers and sisters that I have since acquired, have moved from room to room in our house here in Florida: from the living room, to the master bedroom, to the spare bedroom (converted into a library), to the hallway outside the library, and now to the dining room.  Yes, the dining room. 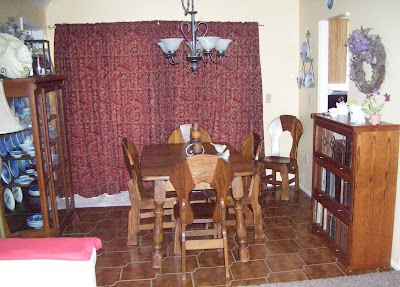 Wise bookmen have sat at this very same dining room table, ate lunch, and shared biblio talk with me:  first Paul Ruxin, and then Mark Samuels Lasner and Donald Farren.  If and when they return and sit around this dining room table, they can now view my Shakespeare Collection: 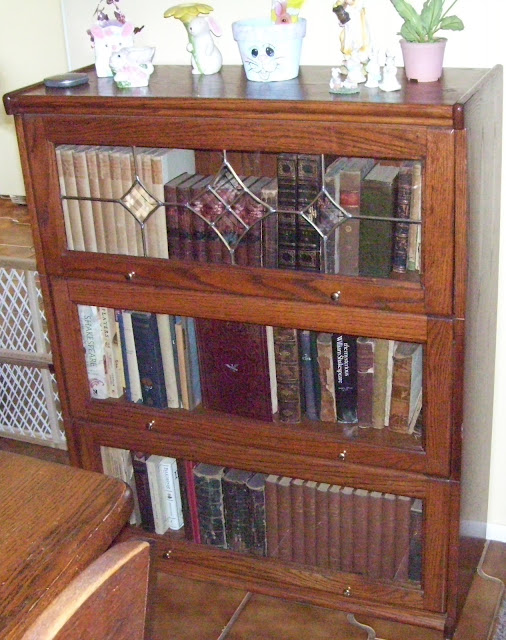 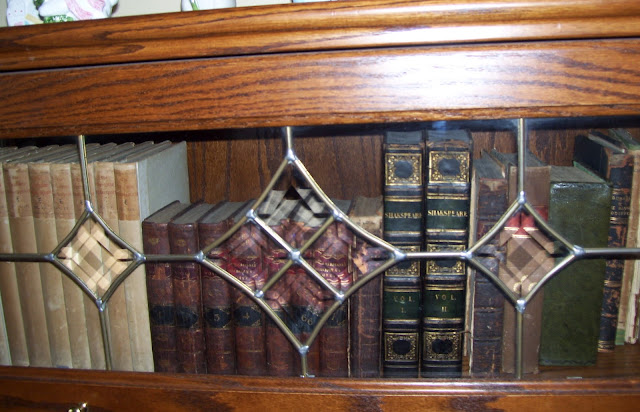 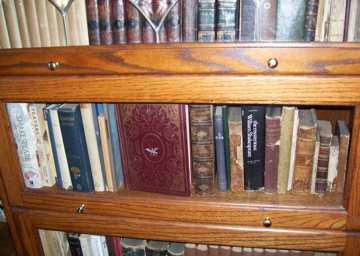 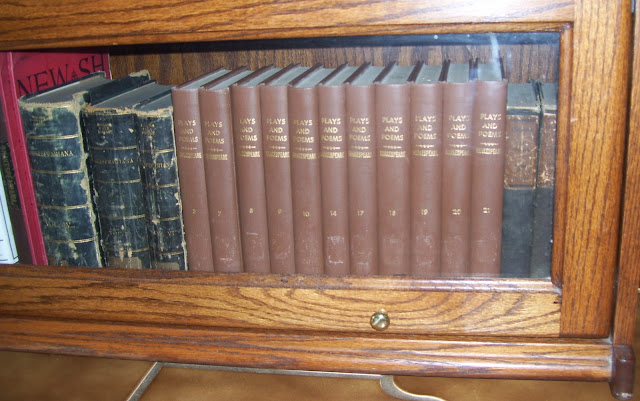 On May 3, 1820, in an essay printed in his periodical, The Indicator, Leigh Hunt wrote,


"The fifth of May, making the due allowance of twelve days, the twenty third of April, according to the change of the Style, is the birthday of Shakespeare. Pleasant thoughts must be associated with him in everything.  If he is not to be born in April, he must be born in May. Nature will have her with him on her blithest holidays like her favourite lover. . . .

The favorite in my Shakespeare Collection is my married set of the First American Edition of Shakespeare's Works.  I almost sold this set in 2006 when I was anxiously awaiting approval of my disability retirement application.  And it is currently on consignment with a notable bookseller  SOLD!! 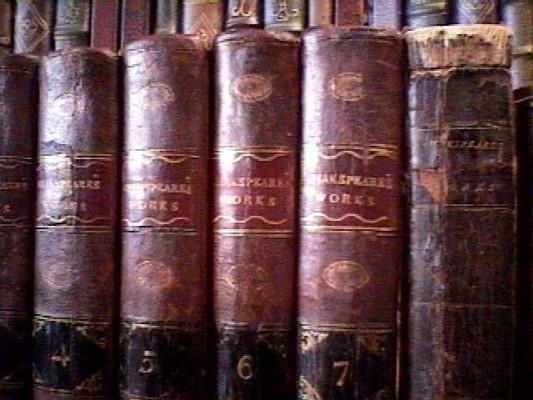 It is hard to believe that Shakespeare's works weren't published in America until 1795, yet that statement still holds true today. 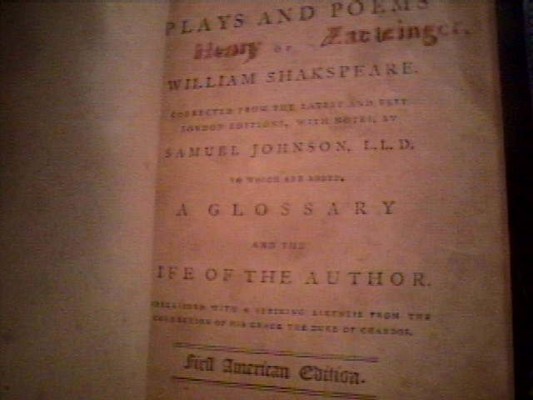 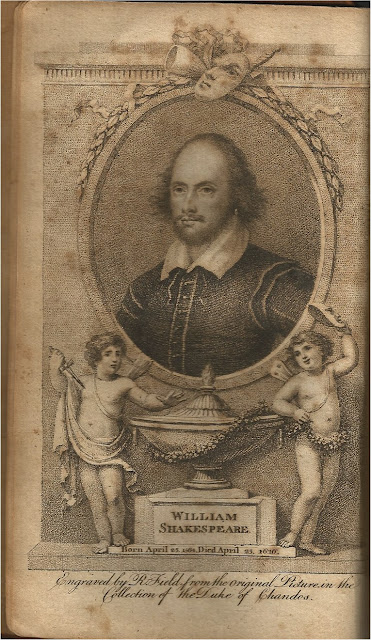 An article in an 1885 issue of Shakespeariana, a periodical I have in my Shakespeare Collection, heralded this portrait as the First American Portrait of Shakespeare
(click on image to enlarge):

This claim stood until the Shakespeare scholar, James G. McManaway, announced in the Spring 1961 issue of Shakespeare Quarterly that the First American Engraving of Shakespeare first appeared in a 1787 issue of The Columbian Magazine.  This engraving by James Trenchard is not even a frontispiece; it is an advertisement for a set of Shakespeare books sold by a Philadelphia bookseller: 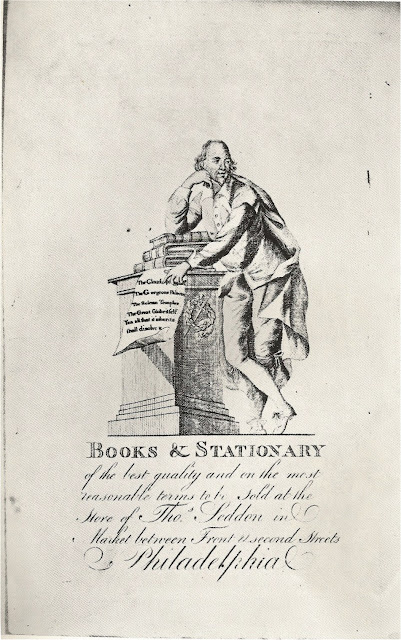 James Trenchard, one of the owners of The Columbian Magazine, engraved the advertisement himself.  The advertisement is inserted in the July 1787 issue of the Folger Shakespeare Library copy of The Columbian Magazine, and in the August 1787 issue of the Library Company of Philadelphia copy.  It is not in any issue in the Darlington Memorial Library copy at the University of Pittsburgh –– at least I couldn't find it!  The Darlington Memorial Library copy can be viewed online at archive.org.  Did someone swipe the engraving or was it never inserted in the periodical?  I notified Special Collections at the University of Pittsburgh to physically check their copy in storage.

But there is  another contender besides Trenchard's engraving, and it is even a frontispiece!  In a 1917 Rosenbach Company catalogue, the renowned bookseller, A.S.W. Rosenbach, listed the following item: 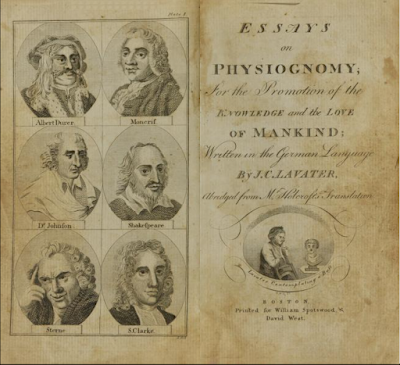 A London edition of this work published in 1789 didn't have the frontispiece; the portraits were printed individually throughout the book. 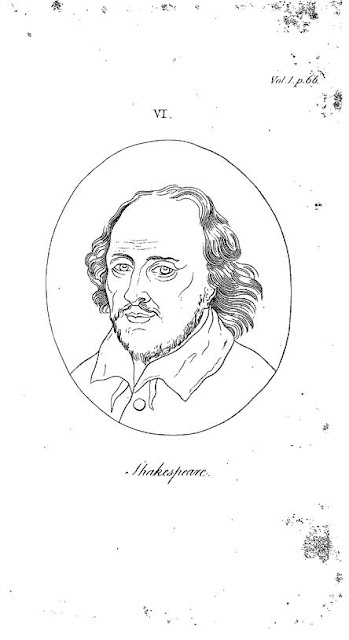 In the portrait above, Shakespeare is facing in the opposite direction from Samuel Hill's portrait.  But surprisingly, Hill's portraits from the 1794 Boston edition were used as the frontispiece in another London edition published around 1800: 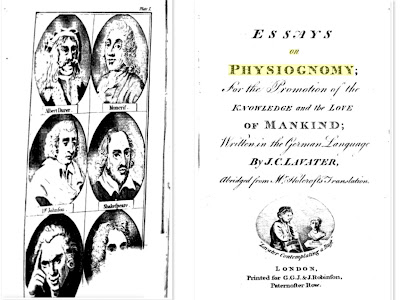 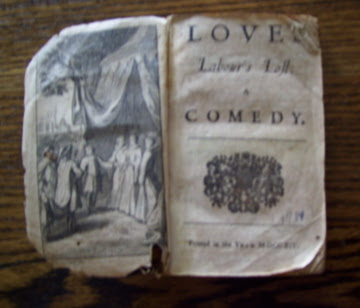 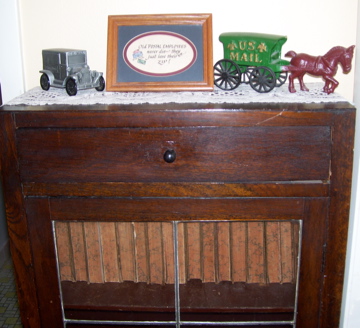 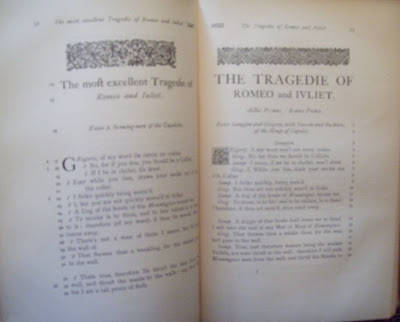 The newest addition to my Shakespeare Collection just arrived this week.   It is a two-volume set of Outlines of the Life of Shakespeare by J. O. Halliwell-Phillipps.  You may recall that I did my November 2011 blog post on him, and a December 2011 post on the Value of Outlines of the Life of Shakespeare.  My set is the 1898 tenth edition, and not of much value monetarily, but the books themselves contain a wealth of information.  The set is ex-library, and the spines have been crudely rebacked with two slightly different shades of green cloth, but I am not complaining.  After all, I acquired the set for less than six dollars, and with shipping included: 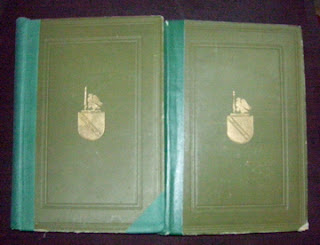 Not all of my Shakespeare books can be viewed from around the dining room table.  My association copies and gifts from friends are in my library room, as are two large odd volumes of the National Union Catalog, Volumes 540 and 541, covering the works of Shakespeare.  These books are too large for my barrister bookcase, as is an oversized volume of Shakespeare I bought when I worked at Waldenbooks in the 1990s. 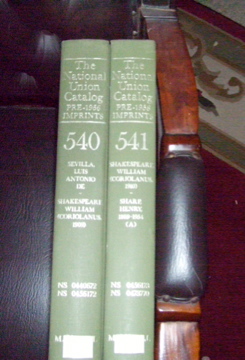 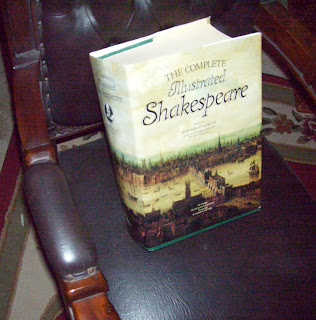 Other recent additions include Shaksperiana: catalogue of all the books, pamphlets &c. relating to Shakspeare, by John Wilson, London, 1827, a gift from Per Rålamb, and Folomania! : stories behind Shakespeare's most important book, by Owen Williams, Washington, 2011, a gift from Paul Ruxin.  Thanks guys!

Without much ado, you can view these Shakespeare books and more on Library Thing.