Searching High and Low For a Certain Boswellian

I'm a firm believer that what goes on in the kitchen should stay in the kitchen.  But there are only seventeen steps from the kitchen to my library.  And that fault in the kitchen, coupled with my not-so-recent fault of not remembering names, has got me worrying that I might be losing some of my cognitive researching abilities.

I mention these faults of mine because they lengthened the time it took to discover the identity of a certain Boswellian I was searching for.  His first name was either Donald or David.  My wife hoped his name was David because nobody wants to be named Donald anymore!

It all started on December 28, 2018.  It was a Friday, so that meant I was toodling with my wife Linda and our friend Eve Harris.  The women were toodling in a nearby thrift store in St. Petersburg.  I was browsing and buying books in Mike Slicker's Lighthouse Books.  That was nineteen months ago.  Lighthouse Books had not yet moved from St. Petersburg to Dade City.  And our friend Eve was still alive....

I remember that I bought five books that day.  I even posted about it on Facebook two days later. 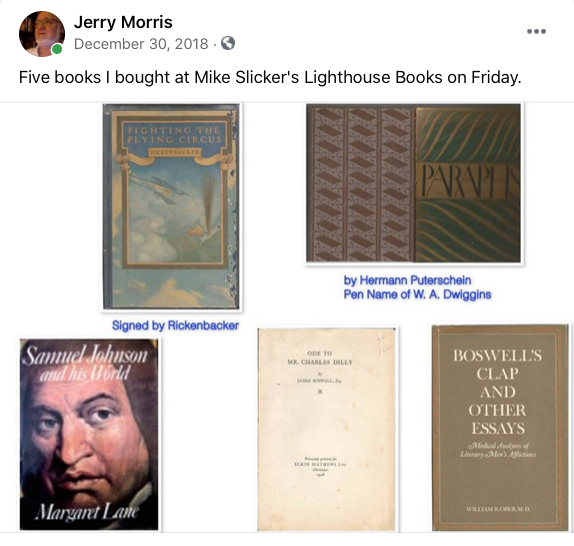 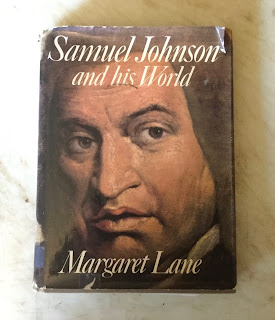 The owner of the Samuel Johnson book,  a James B. Marcus, inserted a postcard, photos of Litchfield, and two articles about Samuel Johnson in his book. 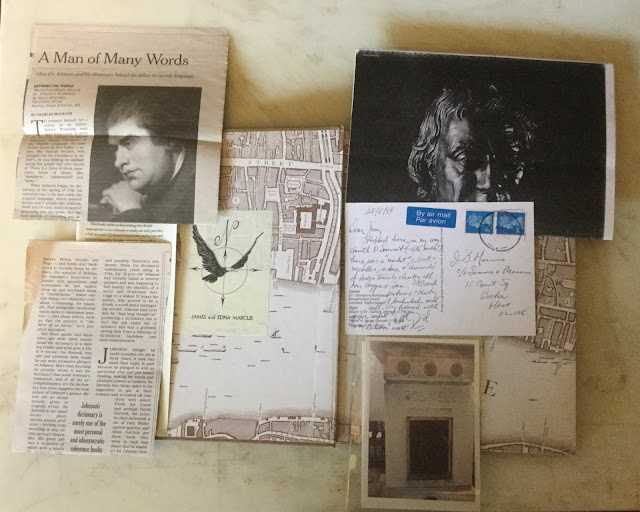 It was the information that was written on the post card that intrigued me.  The sender, whose name was either Donald or David, wrote that his meeting at Auchinleck went well and that "they listened with proper respect."  I immediately went into research mode.  I researched high, and I researched low, but could find nothing about a presentation given at Auchinleck in August of 1994.   Looking back, what I should have done was to stare straight ahead at my desktop screen, and look for an obituary for a James B. Marcus.  Instead, I  wrote to my friend Terry Seymour that night and asked for his help in identifying the Boswellian I was looking for. 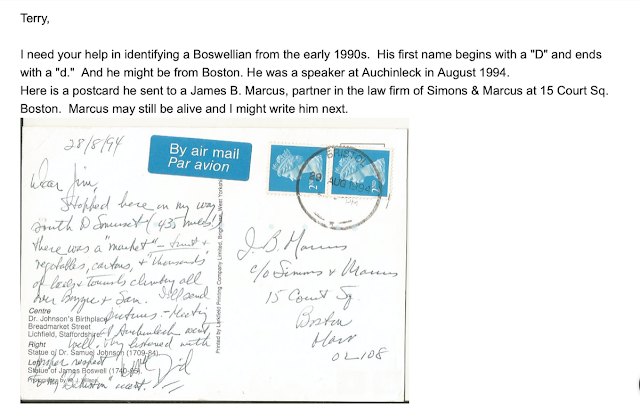 Terry had written a book about the Boswell Library at Auchineleck. But he had no information about the Boswellian who gave a presentation at Auchinleck in August of 1994.  When the weekend was over, I found a place on my bookshelves for Marcus's copy of Samuel Johnson and his World.  And I put any other thoughts of identifying the Boswellian out of my mind.

Fast forward nineteen months to Wednesday, July 29, 2020.  I wanted to do a post on the Samuel Johnson and James Boswell aficionados in my library.  I decided to begin the post with J. B. Marcus's copy of Samuel Johnson and his World.  I went into research mode again.  But this time I did not search high. And I did not search low.  Instead, I took a good look at what would have been right in front of me all the time, if I had only looked straight ahead:  the obituary of James B. Marcus.

I found Marcus's obituary online at Legacy.com.  He died on April 7, 2011 at the age of 89.  Right there in front of my very eyes I read that James B. Marcus had a brother who lived in Sarasota. And his name was David.  Dr. David W. Marcus was his full name.

It gets better people!  Or perhaps I should say that it got worse!  Wednesday, July 29, 2020 was not the first time that I had seen the name David W. Marcus, or the title Failed Laird, Successful Author: James Boswell of Auchinleck.  I just didn't remember seeing them.

On March 15, 2019, my friend Gary Simons queried me with a research question.  In the last few years, Gary had bought several books at A. Parker's Books in Sarasota that had the bookplate of a David W. Marcus.  Gary believed that he was a Johnson collector who lived in Sarasota.  Gary wanted to know more about him, and asked if I had any suggestions.  Gary mentioned that googling the name did not help.  I don't remember how I gained access to the website, but somehow I was able to browse researchgate.net.  I retrieved the following citation, but was unable to read the full text.  I thought that Marcus may have been a student of Pat Rogers at USF, and suggested that Gary contact Rogers. 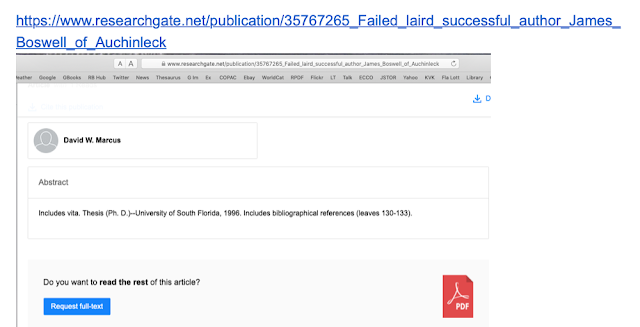 Gary knew Pat Rogers. Moreover, Gary had been an adjunct professor at USF and was able to obtain a copy of David W. Marcus's Vita.   According to the vita, 1994 was not the first time that Marcus gave a presentation in Scotland. 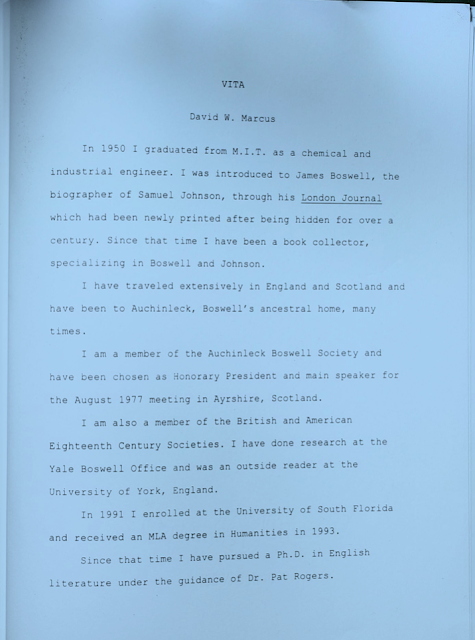 I had received Gary's query less than three months after I  bought the book belonging to James B. Marcus.  But the name, David W. Marcus, did not register in my mind.  Nor did the mention in the post card about a presentation at Auchinleck.  Forgetting the name is understandable because I'm bad at recalling names.  But the Auchinleck presentation and the title of Marcus's thesis/book definitely should have rang a few bells.  And I should have been able to put two and two together.  I have since changed my researching habits.  Before researching high, and before researching low, I'm going to look straight ahead to see what the hell is directly in front of me!

A wonder story Jerry - thank you. I’m often amazed at the materials that show up at your local book stores. Something I would expect in New York City but not Florida. But that improper assumption is mine and as stated, improper. Keep on digging!

Florida booksellers have their share of the books that booklovers want. Some of these books they get from snowbirds and northerners who retire to Florida.

Sometimes it just has to be the right time. Yes, of course, it seems like the right time might have been many months ago, but it just doesn't always work that way. Besides, this way you got to write and share this fun post-- which was also a bit comforting for some of the "mature" among us who sometimes wonder about diminishing cognitive abilities... Keep it going long as you can, and keep that sense of humor, too.