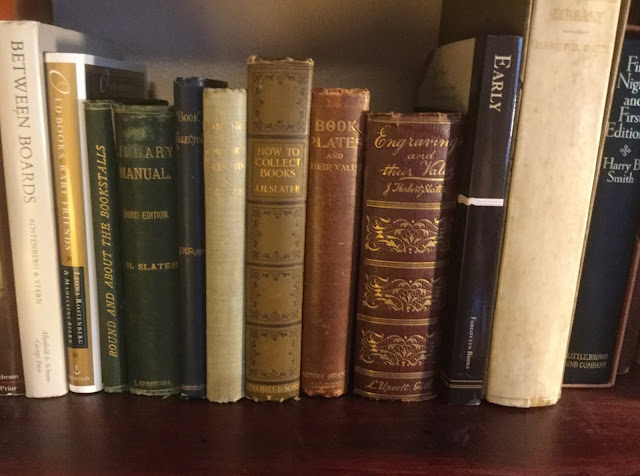 Books About Books was one of the first genres of books I collected when I started collecting books almost 35 years ago (I now have over 1200 Books About Books).  I was serving my last overseas tour before retiring from the U. S. Air Force in 1989.  RAF Mildenhall was where I was stationed.  And believe me, England was the best place ever to begin collecting books!  After I returned to the States, I catalogued my Books About Books and some of my books about essays in  A Book Lover's Journal. 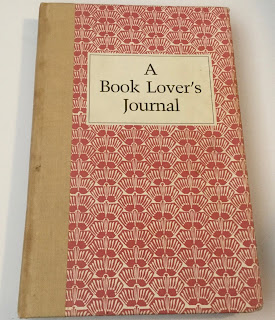 In the back of the journal, I listed the names of the authors of 114 books in my library.  Half of the authors were British, which makes sense, because I bought about half of the books while I was stationed in England. 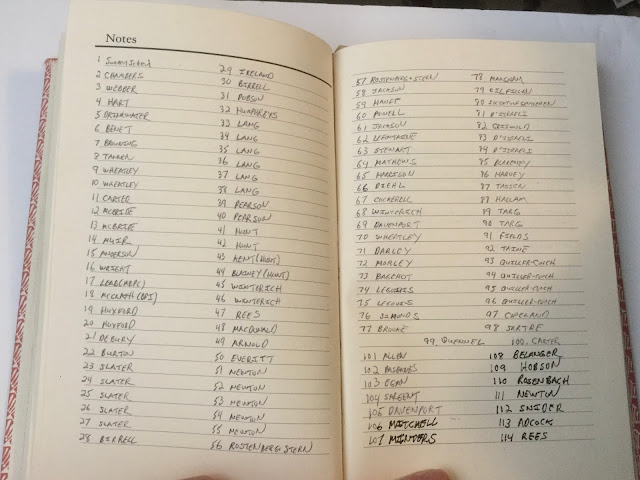 J. H. Slater (1854-1921) was one of the British authors whose books I read to learn about books collecting.  He was a lawyer by trade, but made a name for himself in the book trade.  He was the former editor of Book-Lore: A Magazine Devoted to Old Time Literature.  And he was the first editor of Book-Prices Current: A Record of the Prices at Which Books Have Been Sold at Auction....

To begin with, I had five of his Books about Books:

Round and About the Bookstalls:  A Guide for the Book-Hunter, London: L. Upcott Gill, 1891.

The Library Manual: A Guide to the Formation of a Library and the Valuation of Books, London: L. Upcott Gill, 1892, Third and Enlarged Edition.

How To Collect Books, London: George Bell and Sons, 1905 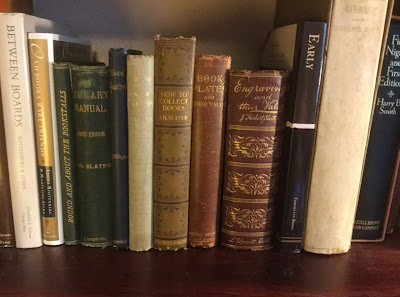 Although Slater's Books About Books were written to help book collectors of an earlier era, the knowledge they contained was still beneficial to me when I went book hunting in England almost one hundred years later.  And I would recommend them to newbie collectors today.

Here is my journal listing for Round and About the Bookstalls: 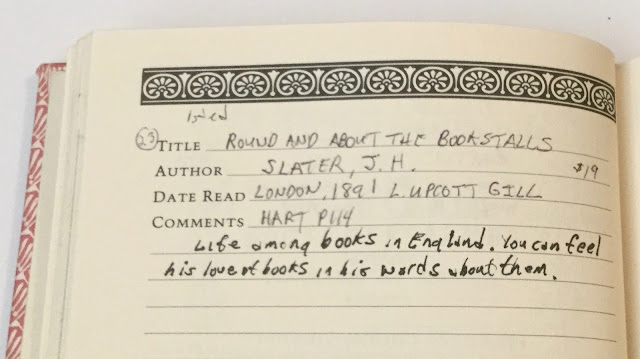 There's one error in my journal listing: I paid £19 for the book, and not $19.  Round And About the Bookstalls is listed on page 114 of Leo Hart's Bibliotheca Typographica: A List of Books About Books.  But the comment is not Hart's; it's mine.  Winslow Webber, in his Books About Books: A Bio-Bibliography for Collectors, lists three of Slater's books, but not Round and About the Bookstalls. 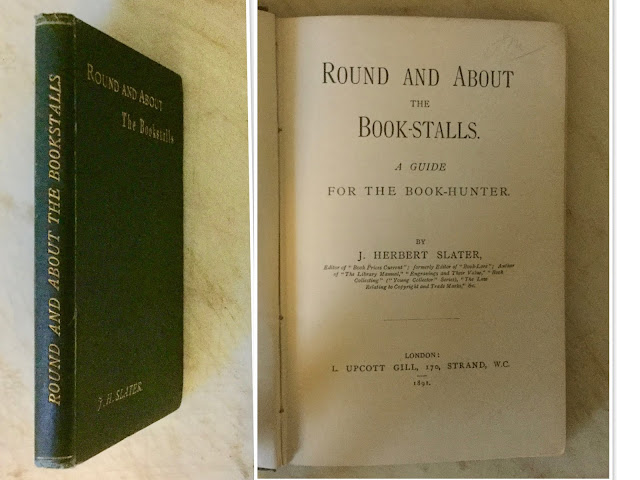 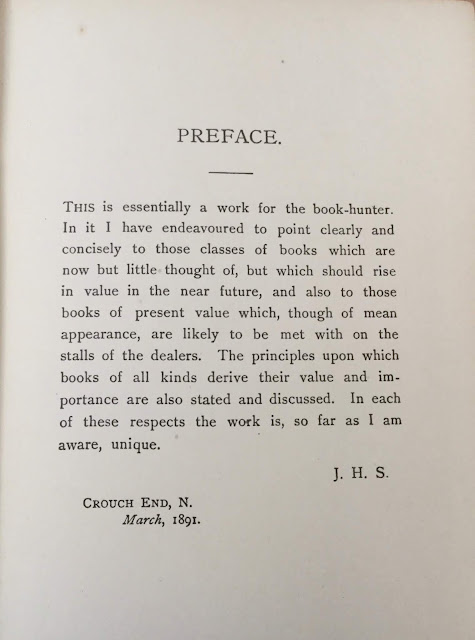 A former owner from the 20th century had this thing about Slater's use of the phrase, "the present century."  He crossed out the word present four times and inserted "19th" in its place: 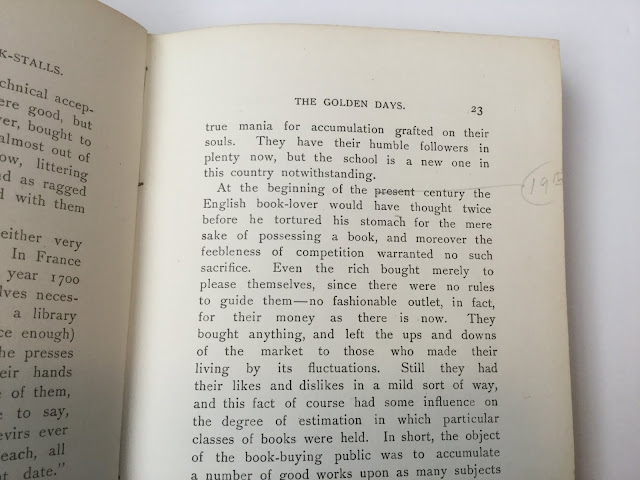 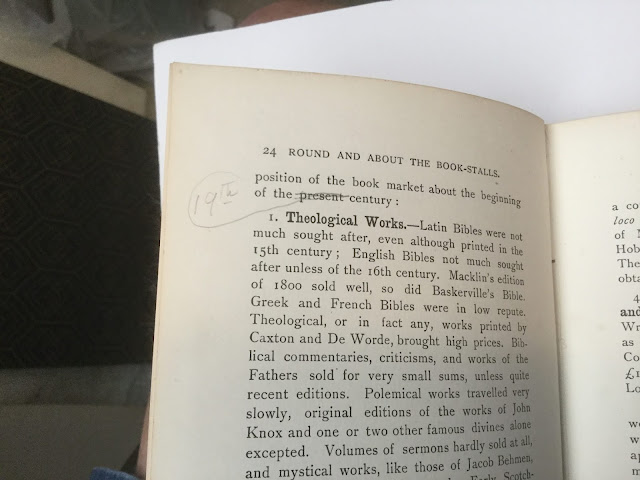 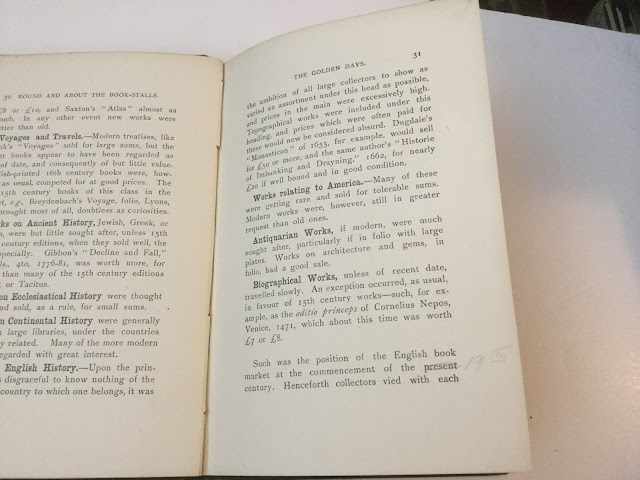 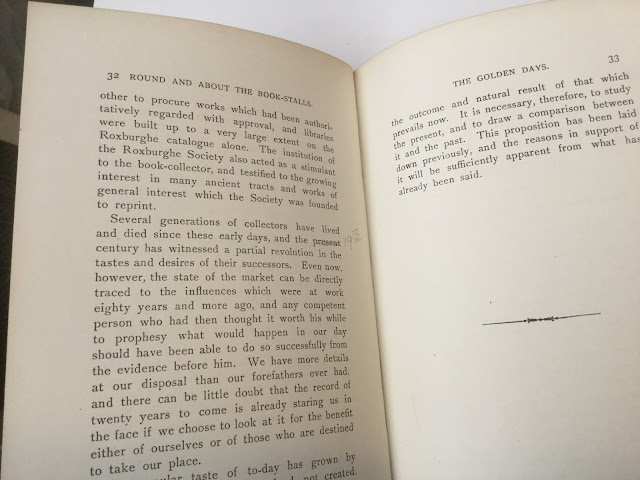 When the publisher identified the 1892 edition of The Library Manual as "the Third and Enlarged Edition," he wasn't kidding.  The first edition only contained 120 pages.  The third edition contained 424 pages! 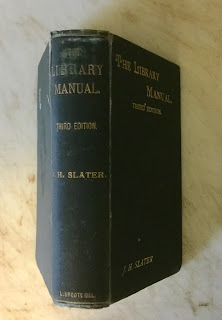 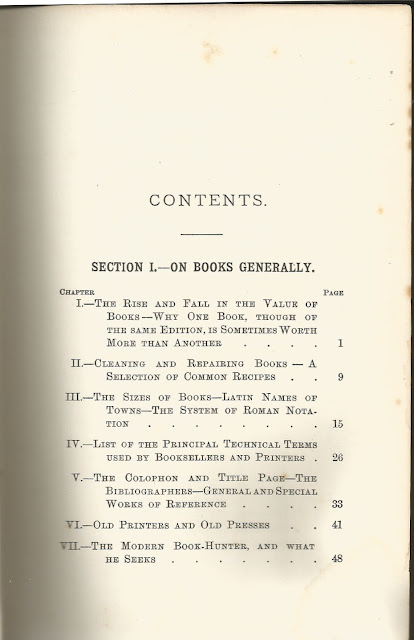 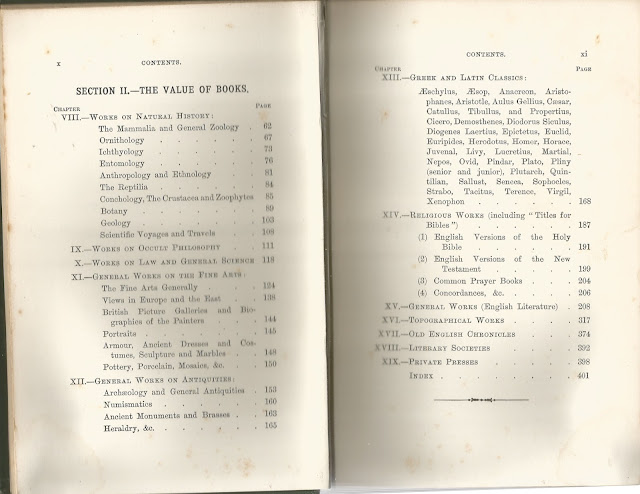 The values of the books in the second section were outdated; but I didn't care.  This book provided me with a list of the collectible books in each genre and by author.

Book Collecting: A Guide for Amateurs 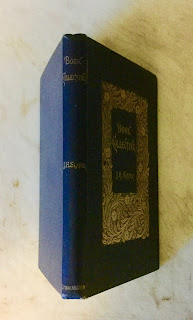 Don't let the sub-title fool you.  This book contains knowledge even the professionals find useful.  My copy was formerly owned by the Denver book dealer and collector Donald Beaty Bloch, No. 329 of 500 copies printed of the large paper edition. 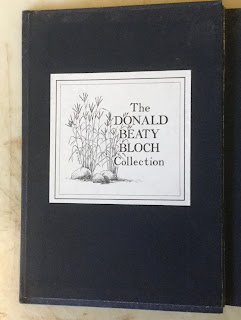 Besides providing information on manuscripts, ancient libraries, early book hunters, and bibliographical aids, this book has separate chapters on the Aldine Press, the Elzevir Press, and early English presses.  It even has a chapter on books to buy! 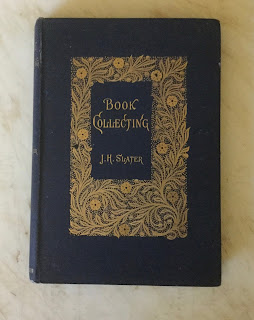 This book, however, is part of the reason for the poor reputation of Lowndes' Bibliographer's Manual as a reliable reference work: that it was imperfect and full of errors.  But it is not the fault of Slater, but rather the fault of later authors who didn't bother to read Slater's entire paragraph before quoting from it.   Slater identifies the faults of the Lowndes book as well as its good attributes, but in a rather long-winded manner.  And later authors never quoted the good attributes of Lowndes:

Here is the paragraph on Lowndes' Bibliographer's Manual in its entirety:


Every bibliographer, and also every collector of any eminence, has within reach certain books of reference which experience has shown to be absolutely necessary.  Chief among these is Lowndes' Bibliographer's Manual of which two editions have been issued.  The first was published in 1834; the second in seven parts from 1857-61, with an appendix volume in 1864, having been re-issued from the stereotype plates without a date in 1871. The latter may frequently be picked up at auction sale for about 25s., but there is this peculiarity about the work, that it really would not seem to be very material which edition is purchased.  The book is imperfect and full of errors: it cannot be relied on, and the second edition, which was edited by the late Mr. H. G. Bohn, the eminent bookseller, is as untrustworthy as the first.  The original plan, which has never been departed from, was to give the names of English authors in alphabetical order, placing under each the title of the works he wrote, with the date of each edition, number of volumes, in many cases the collation, and finally the sums realised at auction.  Nothing fluctuates so greatly as auction values, and it is not surprising, therefore, to find that not a single entry in Lowndes under this head can be accepted at the present day.  Some of the variations between past and present prices are ludicrous in the extreme, and there is no doubt that anyone who attempted to obtain his knowledge of the value of books from Lowndes' Manual would find himself in possession of a mass of old-time information which would be rather a hindrance to him than otherwise.  The Manual is useful because it gives a full and tolerably complete list of English authors, and collates many of their works with considerable care; it is, moreover, the authority quoted by catalogers, and, being a copyright publication, practically bars the way to any rival work on the same subject.  for these and other reasons it is indispensable. 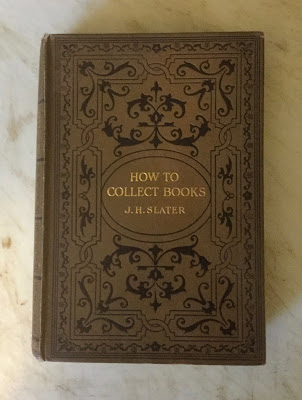 This book is for the beginning book collector as well, and covers practically every imaginable subject pertaining to book collecting.  Slater recommends Lowndes' Bibliographer's Manual in this book as well, but is less verbose. "...mention must, of course, be made of Lowndes' "Bibliographer's Manual," useful in every way, except for the quoted prices, which have long been obsolete." 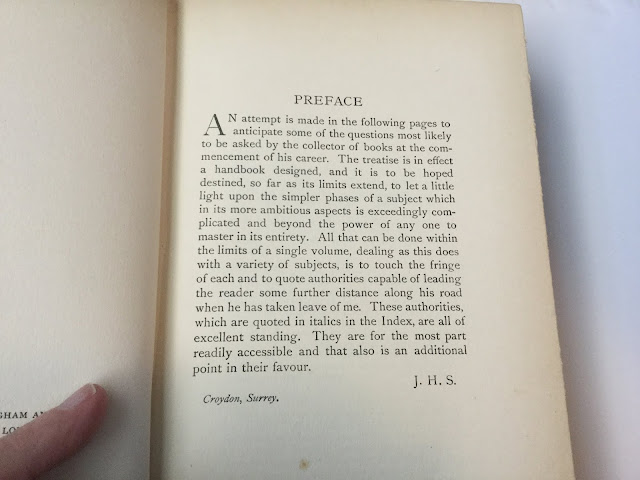 I would regard the four Slater books listed above as instructional books.  This next book, The Romance of Book-Collecting, is more anecdotal than instructional, although there are some lessons to be learned from reading the book. 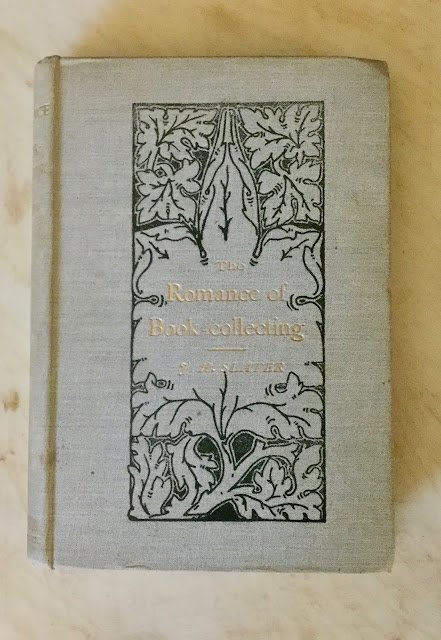 In a chapter about old hunting grounds in London, Slater mentions Grays's Inn Lane, and the premises of Thomas Osborne, where Johnson clobbered Osborne with a folio.  But Slater adds a new twist to the story.  I have always read that Osborne was belittling Johnson, and Johnson finally had enough, and hit him with a folio.  But on page 80 of The Romance of Book-Collecting, Slater writes that Johnson wanted to buy a huge folio, but Osborne refused to sell it at any price, so Johnson hit him with it.  The folio in question was the 1594 edition of Biblia Græca Septuaginta, the same book identified in other versions of the tale.

I have added three more of Slater's books to my library in the last 20 years, one of them in just the last month:  Early Editions: A Bibliographical Survey of the Works of Some Popular Authors, first published in 1894.  And that was because of the Wise forgeries.  Only recently did I read that forty years before Carter and Pollard exposed Thomas J. Wise's forgeries in 1934, that in Early Editions, J. H. Slater had called Wise out about his forgeries.  So I had to have a copy of Early Editions.  None of the reasonably priced copies currently available from stateside booksellers was in good condition, so I acquired a reprint published by Forgotten Books in 2012. 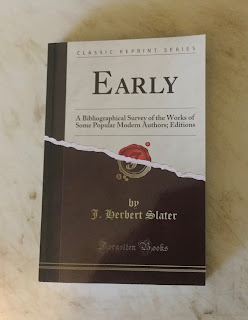 In Early Editions, under the listings of George Elliot's works,  Slater wrote about Brothers and Sisters, Sonnets, which was reportedly printed in 1869 for private circulation only:


This work is supposed to be a fictitious and ante-dated edition reprinted from the "Legend of Jubal and Other Poems," 1874, in which the Sonnets perhaps really first appeared....


A good copy would sell by auction for about £10 or £12, and it is worthy of note that the market value of genuine copies of the work has at least doubled within the last three or four years.

A pirated reprint is occasionally met with, and, having been very carefully executed, is almost impossible to detect it from the original.  It is in every respect but one a masterly production, the only apparent defect being in the description of the paper, which it was probably found impossible to match exactly.  There is no doubt that many forged copies are on the market.

This next book, Book Plates and Their Values, published in 1898, is one of the reference books in my library. 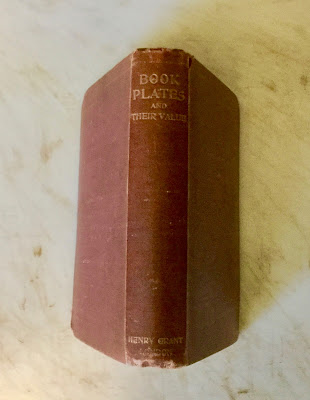 I don't even bother to look at the values of the bookplates listed in this book since they are outdated.  And I don't collect individual bookplates either.  But the information about the bookplates and their owners has aided me in my provenance research of books.


This next book,  Engravings and their Values, is the thickest Slater book in my library.  But I don't collect engravings or prints.  In fact, the only reason it is in my library is because, at one time, I may have had fleeting thoughts of becoming a completist, and collecting all of Slater's works. 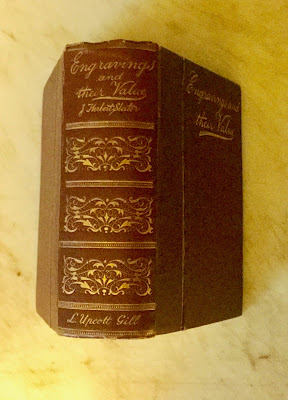 A completist I am not.  But a Books About Books Collector I am!

One more book by Slater that arrived in the afternoon mail today: 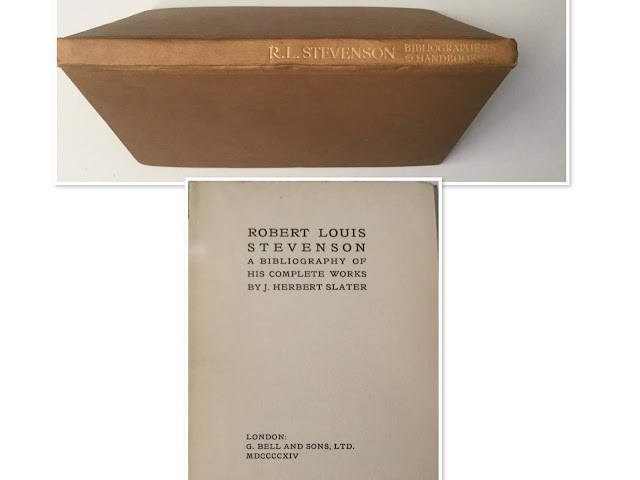 Thanks, Jerry.
Very interesting. There is so much that can be learned from books published long before our times, but still valid.
Best,
Alan Culpin
Abracadabra

I also love to collect books about books and often receive blank stares when I inform people that that's what I collect. I have a little over a hundred such books and got into them through ASW Rosenbach when I found a title of his in a used bookstore that seemed intriguing. I also love when authors put out books of their forewords such as Neil Gaiman or when book reviewers release a book of their favorite reviews and essays such as Joe Queenan. In fact my favorite quote by Queenon was about Dracula, that Bram Stoker should've made Dracula a bibliomaniac and that he only sucked blood to prolong his life so he could get through his To Be Read pile. I do believe I have a couple books by Slater and if not I'll have to remedy that immediately. Thanks for these.

I really enjoyed reading of your book hunting and your great finds. I have 128 books in my catalog "Books About Books" but nothing terribly rare or as interesting as your Slater books. There's a current novel I read that I think you'd enjoy--a bookseller's wife has died young, and when he finally goes to Welsh village known for its rare books, he finds a sketch of his wife in a 19th century book. The story unfolds with chapters devoted to booksellers since the 16th century as the young bookseller's love of his wife and books unfolds. The title escapes me, and there is a second book about a modern bookseller--I think Anni might be reading them now.

The title of the book you described is The Bookman's Tale by Charles Lovett. It's a very good book.

Another excellent and intersting post, Jerry. I love how you do research on each book and report it in the article. Well done.

Enjoyed your comments about Slater's books. My UT collection has six of his titles including one on Sporting books which you do not list. That book is also a presentation copy. Remind me at a FBS meeting at UT and I will search the shelves for the title for you to inspect. Cordially, Lee