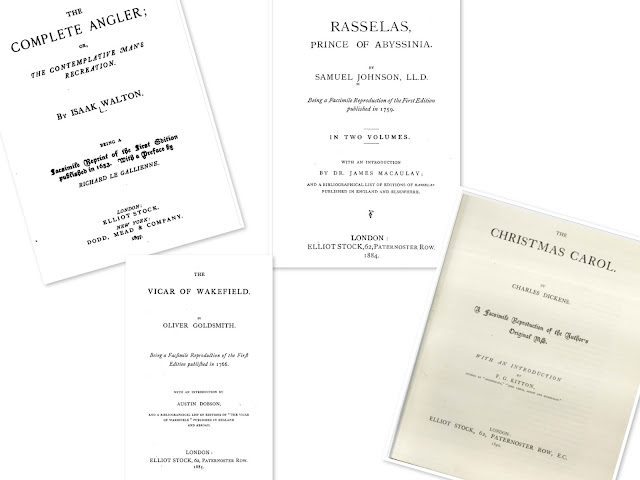 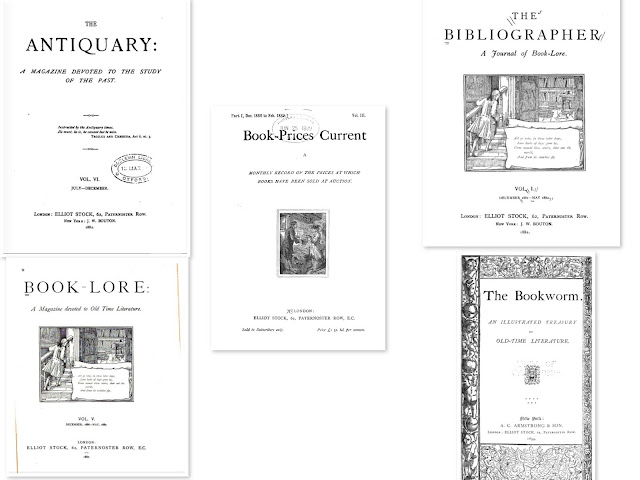 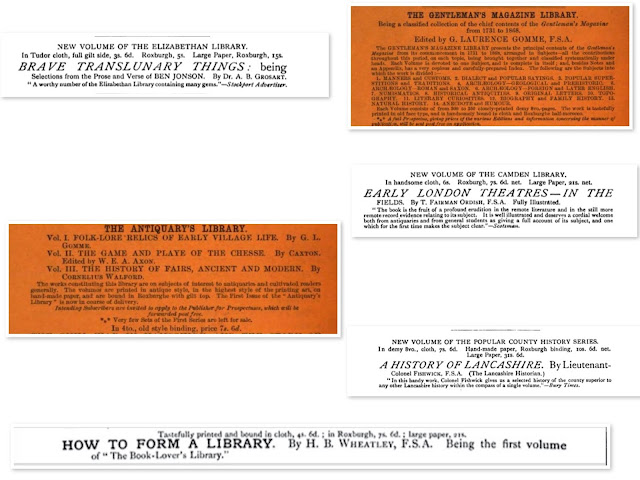 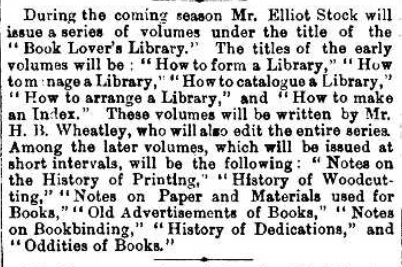 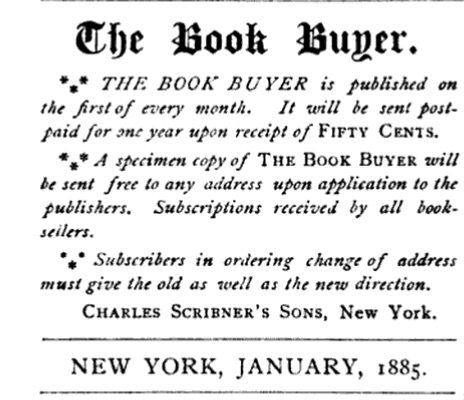 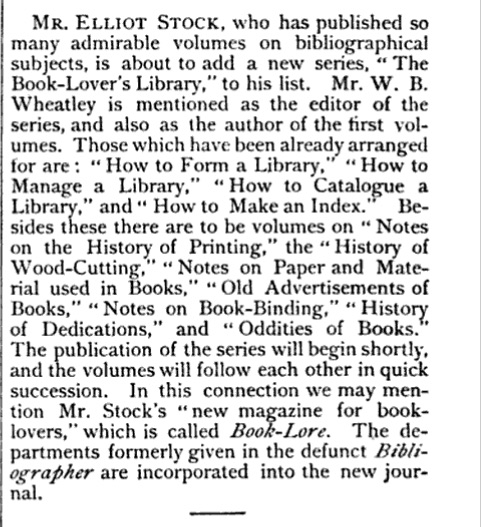 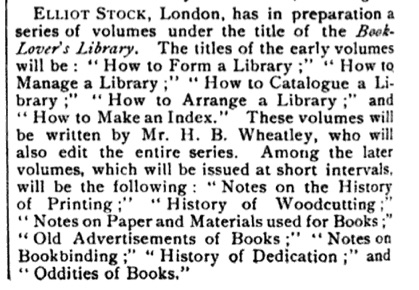 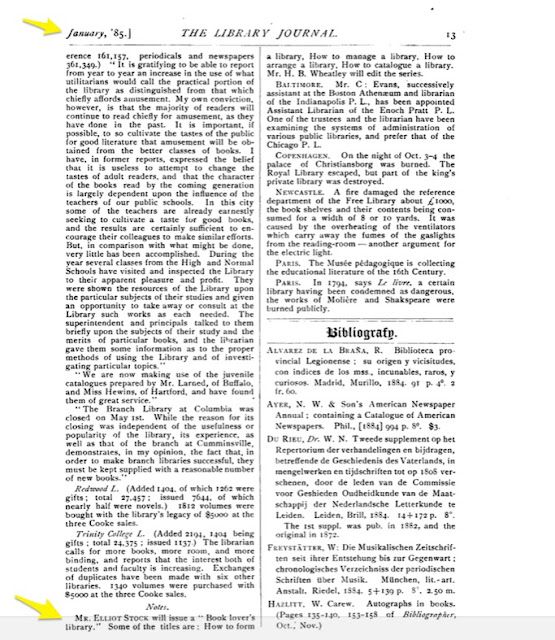 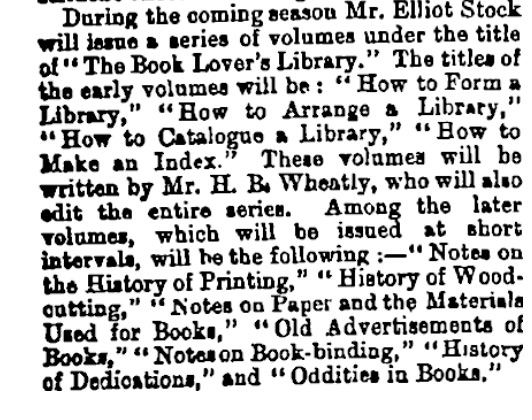 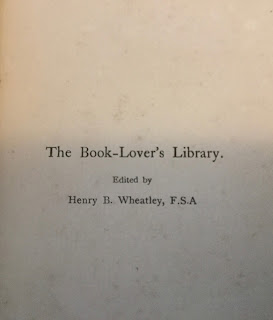 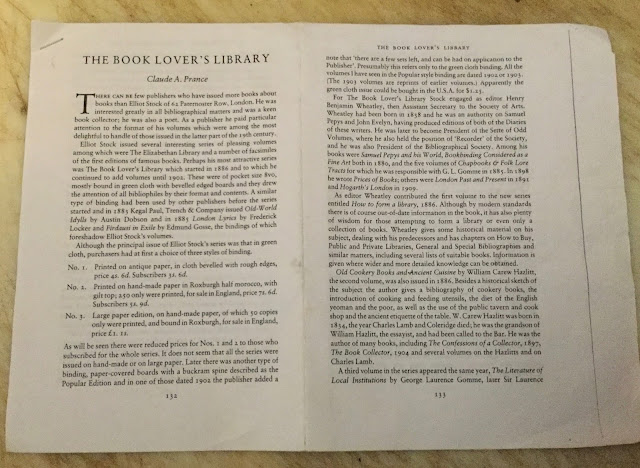 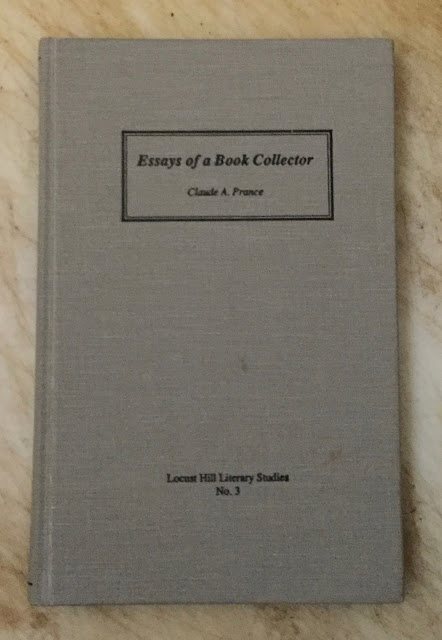 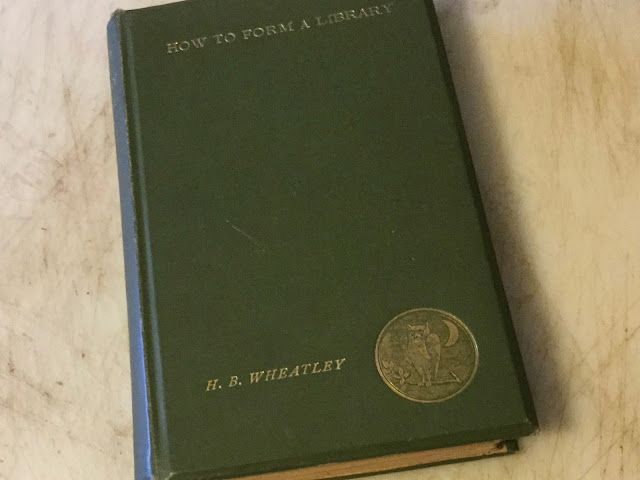 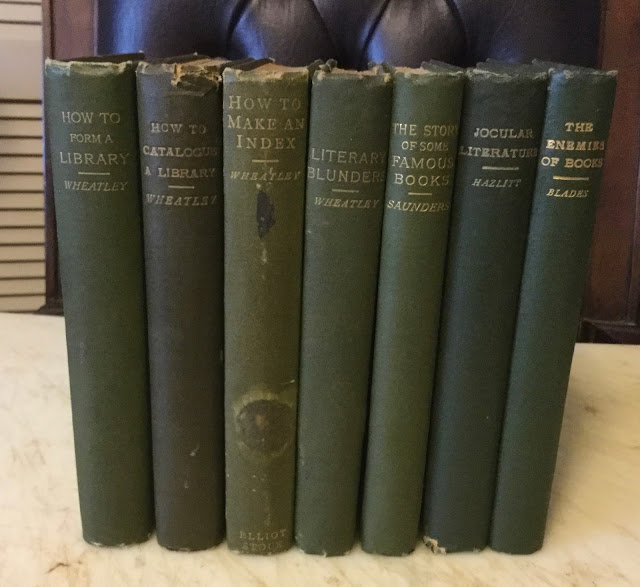 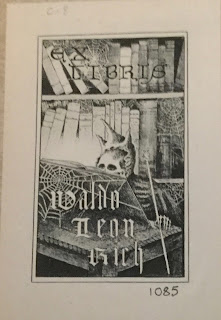 Dear Jerry,
Thank you for sharing another enlightening article about books; I look forward to them. I'm curious about something: was Wheatley a co-founder of the "Topographical" Society, or did a typo make that from "Typographical"? Either might be possible, so I seek clarification.
I have a copy of the "Literary Blunders" volume text-block, with deckle edges and gilt top, which I bought uncased; I enjoy the humor in my "paperback" Wheatley.
Bob Mueller
Bellingham WA

Thanks for your kind words.

Thank you for the very interesting article on the BLL in general and Henry Wheatley in particular. I found it very informative and helpful.

I am not a collector of BLL at present, though I will likely do so moving forward. I do own two BLL editions, a large paper copy of The Imitation and a what I thought of as 1/4 buckram binding of Literary Blunders. I bought the first ten years ago because I collect books about books, and the second because I was interested in Wheatley himself. I found them both good reads.

I started collecting recently the Sette of Odd Volumes, because of the Wheatley association. If you are interested inbibliophiles and such a the Odd Volumes are a rich source of interest,

I do have a question. The Imitation's author is noted as Leonard A Wheatley. Any idea who this might be. I thought it was likely a son or son-in-law of Wheatley, he had five children. Given some of the information in the blog you wrote, and the introduction to the Imitation, the original editor of the book was not noted as Wheatley, but another, who passed away. It makes sense if Henry Wheatley gave the project token. There is no other mention of Leonard otherwise.

I appreciate the link to the other Wheatley BLL blog as well. The more information the better.

Thanks for your kind words about my article on the Book Lover's Library series.

In answer to your query, I don't think Leonard Abercrombie Wheatley was related to Henry B. Wheatley. If he were, I believe it would have been mentioned on Leonard's obituary that was published in the periodical, The Academy, in 1895. Leonard was a bookseller, an author, and a contributor to several contemporary magazine (http://tinyurl.com/n7oojq4). Henry B. Wheatley did have an older brother but his name was Benjamin Robert Wheatley.

I am reading diaries handwritten (1876-1905) where the author is excited that Elliot Stock has agreed to publish his book. Unfortunately, the diary ends with the death of this man and one never discovers if the book is published (I assume not). My question: how would one find the record of manuscripts read in 1905 by the Elliot Stock 'readers'? I know this is a long shot.

I'd be surprised if there was a record kept of manuscripts read in 1905 by the publishing house of Elliot Stock. The author did say that Elliot Stock agreed to publish ihs book, so your best bet would be to search the author's name, and see you can find a book by him that was published by Elliot Stock in 1905 or 1906.

Hello I found out that Elliot Stock did not post the author name on title page of some of the Book Lover's Series of books. See Patrick Speeding post. This was found out when I was downloading books from Internet Archive. Patrick did not know this and why would Elliot Stock do this. There has to be a reason for this. Charles.......

Charles (posting as Unknown) In the late 1800s, publishers would sometimes omit an author's name on the title page of a book if they thought an author was not yet well known to the public. Elliot Stock, himself, omitted Augistine Birrell's name from the title page of the first four editions of the Obiter Dicta, all of which were published in 1884. He added Birrell's name to the title page when he published the second series of Obiter Dictain 1887. https://www.abebooks.com/signed-first-edition/Obiter-Dicta-Birrell-Augustine-Elliott-Stock/4560800741/bd#&gid=1&pid=2