121 Words or More
About the Library of
An American Lexicographer


English lexicography was commenced on a very limited scale, being at first restricted to the notice of what were termed " hard words."  It is in its nature cumulative ; every author or compiler of a Dictionary may be expected to produce something of his own, while he is very much aided by the labors of preceding lexicographers.  Johnson, in preparing his Dictionary, made use of an interleaved copy of a folio edition of Bailey's ; and Johnson's work, as Walker remarks, " has been deemed lawful plunder by every subsequent lexicographer."  In the preparation of this Dictionary, assistance has been derived not only from that of Johnson, but from various other Dictionaries and Glossaries.  Several Pronouncing Dictionaries have been used with respect only to pronunciation.  In relation to many of the words of various or disputed pronunciation, Dr. Webster's authority is often cited in connection with that of the English orthoepists ; and the edition of his Dictionary made use of is that of 1841, the latest that was published during the life of the author.  With respect to a very few words of doubtful origin, Dr. Webster's etymology is noted in connection with that of other etymologists ; but in no case, so far as is known, without giving him credit.  In other respects, the rule adopted and adhered to, as to Dr. Webster's Dictionary, has been to take no word, no definition of a word, no citation, no name as an authority, from that work.

Joseph E. Worcester
From his Preface to The Dictionary of the English Language
Cambridge, December 29, 1859 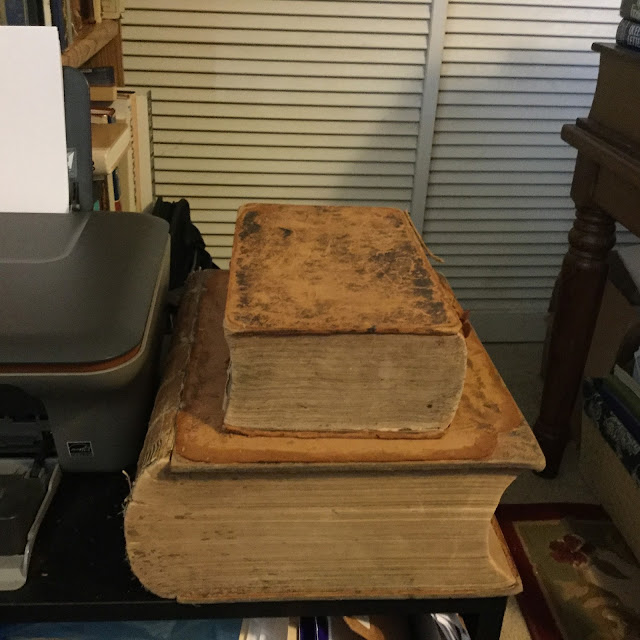 I published two blog posts about Joseph Emerson Worcester  (pronounced Wuss-tur) on the 10th of September, 2015.  The first post was about The Dictionary Wars between Joseph E. Worcester and Noah Webster.  And the second post was about researching a pamphlet containing two reviews of Worcester's first dictionary.   While researching the reviews on Google Books, I came across a copy of the reviews that was bound in a book belonging to Joseph E. Worcester.  The book was given to Harvard Library after Worcester died.  Pasted on one of the front endpapers was this bequest bookplate, dated 2 July 1866 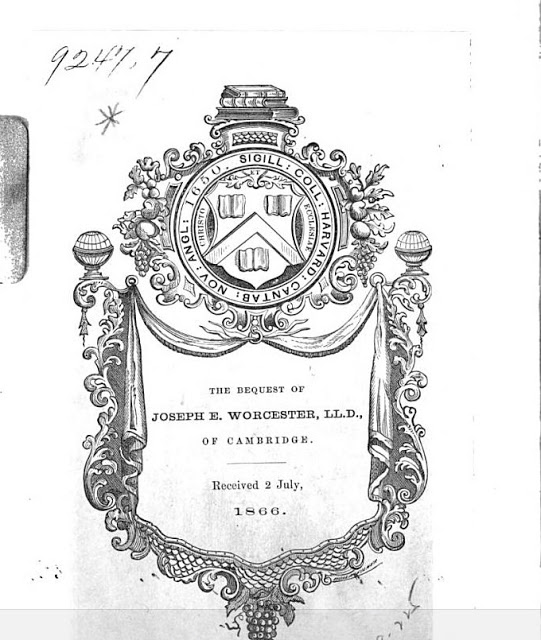 I wondered what other books Worcester had given to Harvard.  Did he give Harvard any of the fifty or so English dictionaries he said he had in his own library, and which he used in compiling his own 1830 dictionary?  Webster had accused him of stealing the definitions of 121 words from Webster's dictionary–an accusation of plagiarism that, to this day, still muddies Worcester's good name and reputation.  Don't believe me?

Go to Princeton's WordNet and see what it says about Worcester:

Go to WebsterDictionary.org , Vocabulary.com, American Heritage Dictionary (ahdictionary.com) and several other websites, and what you will see is mention of Webster accusing Worcester of plagiarism.  What you will not see is any mention of whether the accusations against Worcester were unfounded.

If it were me, and if all they remembered about me 150 years after I was dead and buried were these plagiarism accusations, I would turn over in my grave.

But alive I am.  And I am sticking up for the dead guy...

A few days later, I discovered exactly how many books Worcester had given to Harvard.

Worcester used these 255 books to compile his mammoth Dictionary of the English Language, published in Boston by Hickling, Swann and Brewer in 1860.   I then searched Google Books and identified 10 of the 255 books Worcester gave to Harvard, which are pictured below, all of which had the bequest bookplate pasted on their endpapers. 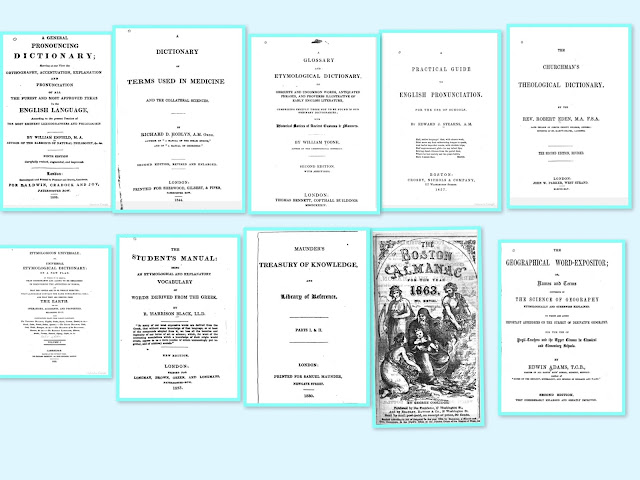 Two questions I wanted to answer:

Did Harvard have a record in its archives of all the books Worcester had given to Harvard?

Was there a catalog of Worcester's library completed either before or after the bequest?

I found the answer to the second question first.  In its Joseph Emerson Worcester Manuscript Collection,  Cunningham Memorial Library, Indiana State University had a copy of an inventory of Worcester's library, as it reportedly was at the time of his death: 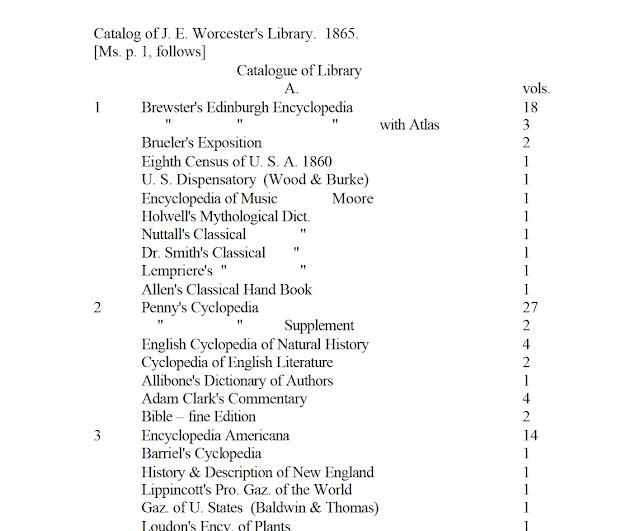 The catalog itself was 28 pages long and contained 1395 volumes.  The books were identified by location: by book case and by shelf.  At first glance, however, only one of the ten volumes I identified as going to Harvard was listed in this catalog: the Boston Almanac (Ms. P.10 Book Case B, Secretary, shelf 2).  And the title was all that was listed, meaning this almanac could have been from a different year than the one given to Harvard.

I planned to catalog Worcester's library on LibraryThing.com  I  helped catalog the library of the British lexicographer Samuel Johnson on Library Thing in 2008, and thought it would be neat to have the library of an American lexicographer on Library Thing as well. I remembered that the 1785 catalog of Johnson's library was called "the worst catalogue ever produced."  Only twenty percent of the books sold at the auction of Johnson's library were identified by title in the auction catalog.   The books listed in the 1865 Catalog of Worcester's library were identified by title at least.

Now to locate a record of the books given to Harvard...

Acquiring only the books Harvard didn't already have would have required advance preparation. Both John Langdon Sibley, the Harvard Librarian, and Worcester were members of the Massachusetts Historical Society, and I suspect they got together and identified which books Worcester would donate to Harvard after he died.  I located Sibley's Private Journal online and hoped he listed the 255 books.  But all I found were diary notices of Worcester's death and the receipt of the Worcester bequest. 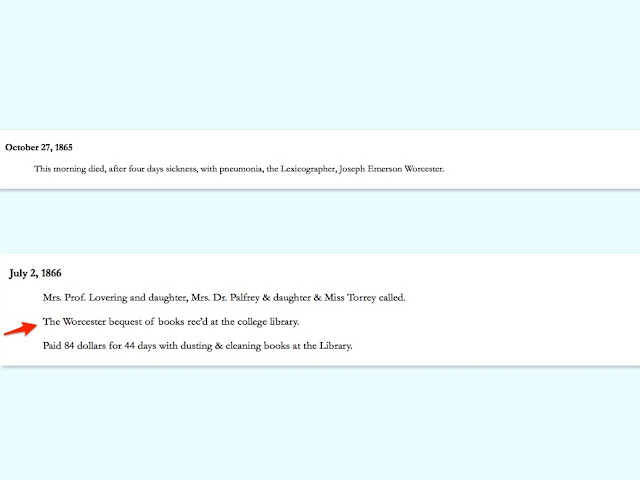 I had a contact at Harvard Library:  John Overholt, Curator,  Donald and Mary Hyde Collection of Dr. Samuel Johnson/Early Books and Manuscripts, Houghton Library, Harvard University. And he pointed me in the right direction: to the wonderful people in the Harvard Archives Reference Department!


I provided a link to the images here.   Bear with me; you will get to see the scans).

On April 15, 2016, I received permission from Harvard to use the scans and the bibliographical information contained in them to catalog Joseph E. Worcester's library on Library Thing and to post the ledger scans in this blogpost.  And here is the citation:
Harvard College Library. Donation lists and books received by the Harvard College Library, 1827-1877, UAIII 50.15.70.6 Box 11. Harvard University Archives.


And here's a big THANK YOU to the Harvard Library Reference Department and its staff member who took the scans with her IPhone! 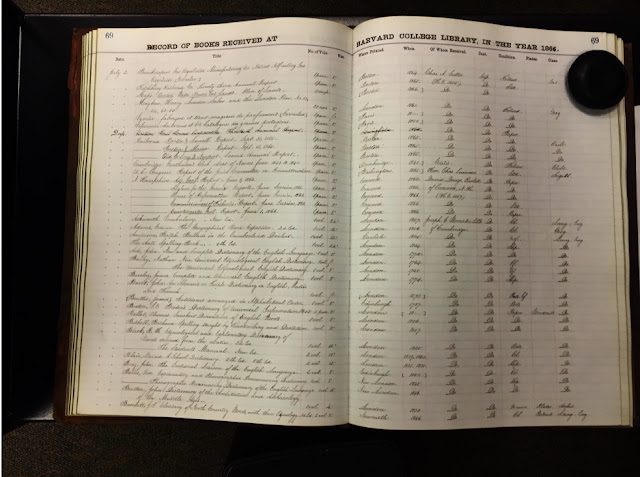 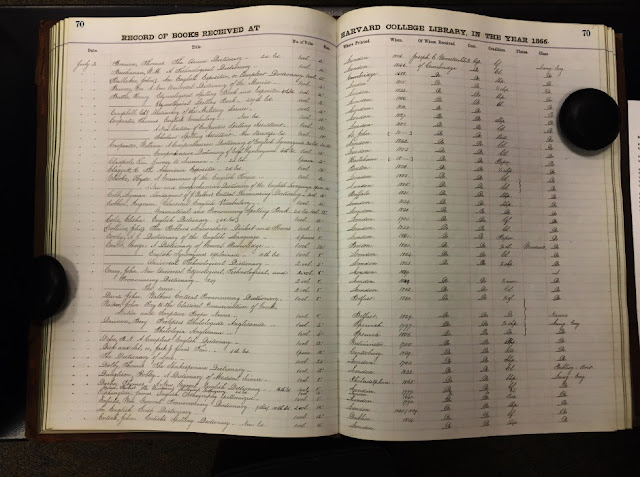 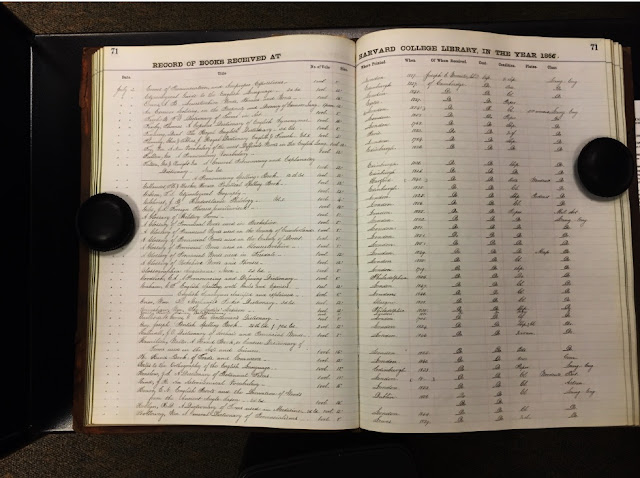 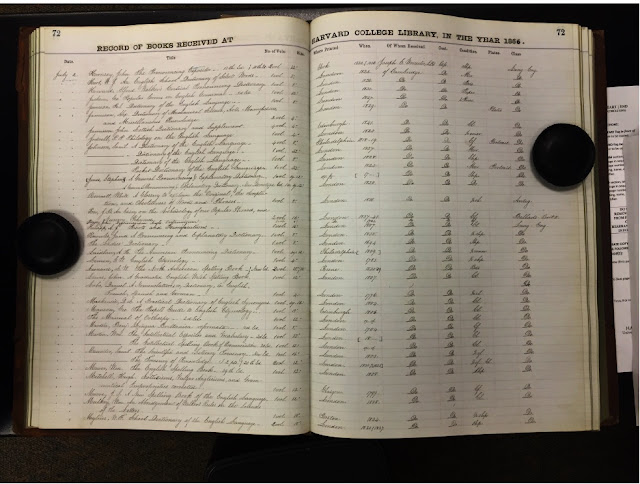 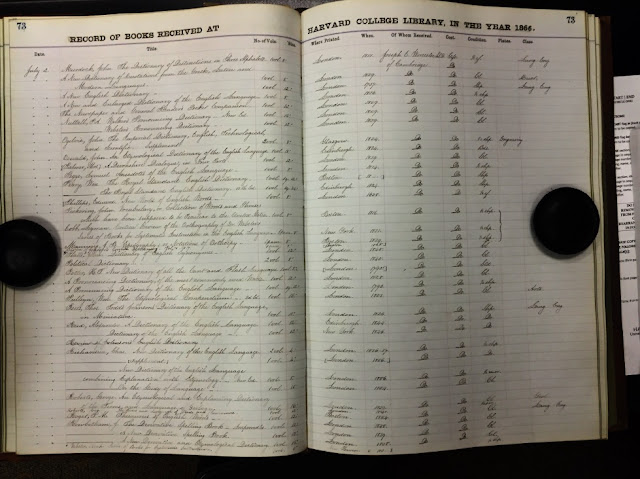 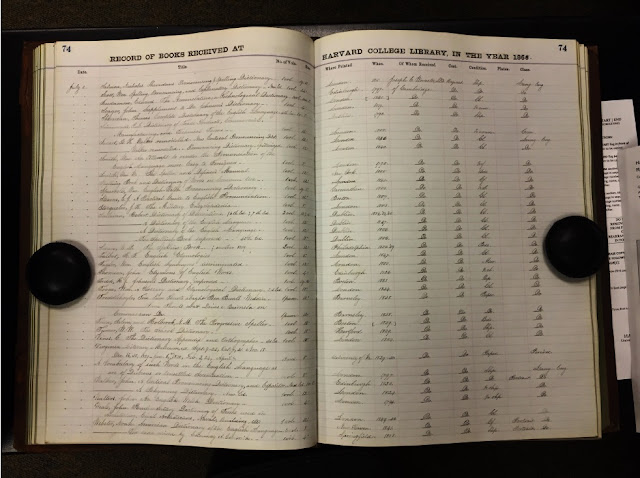 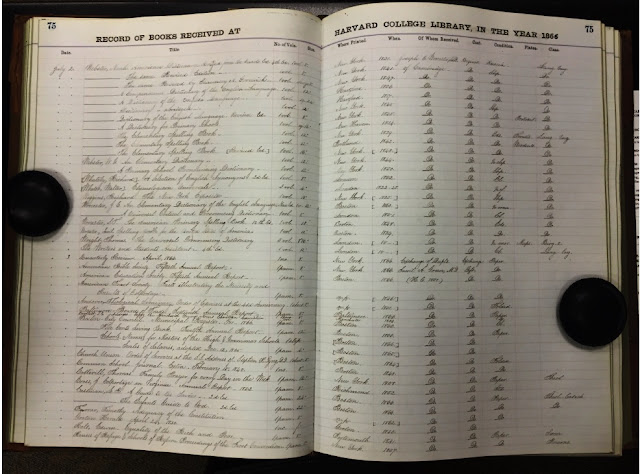 And here are the expanded views: 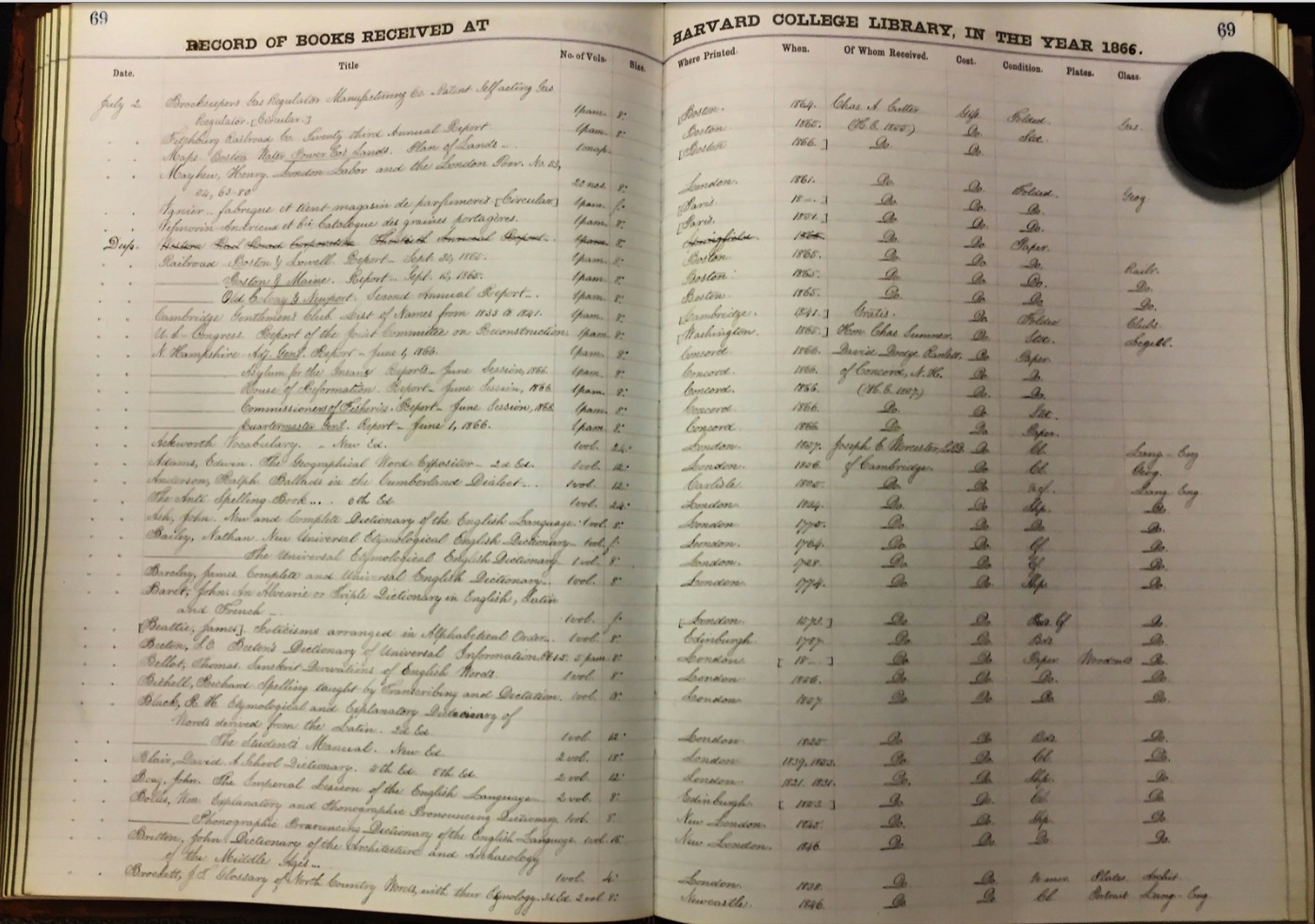 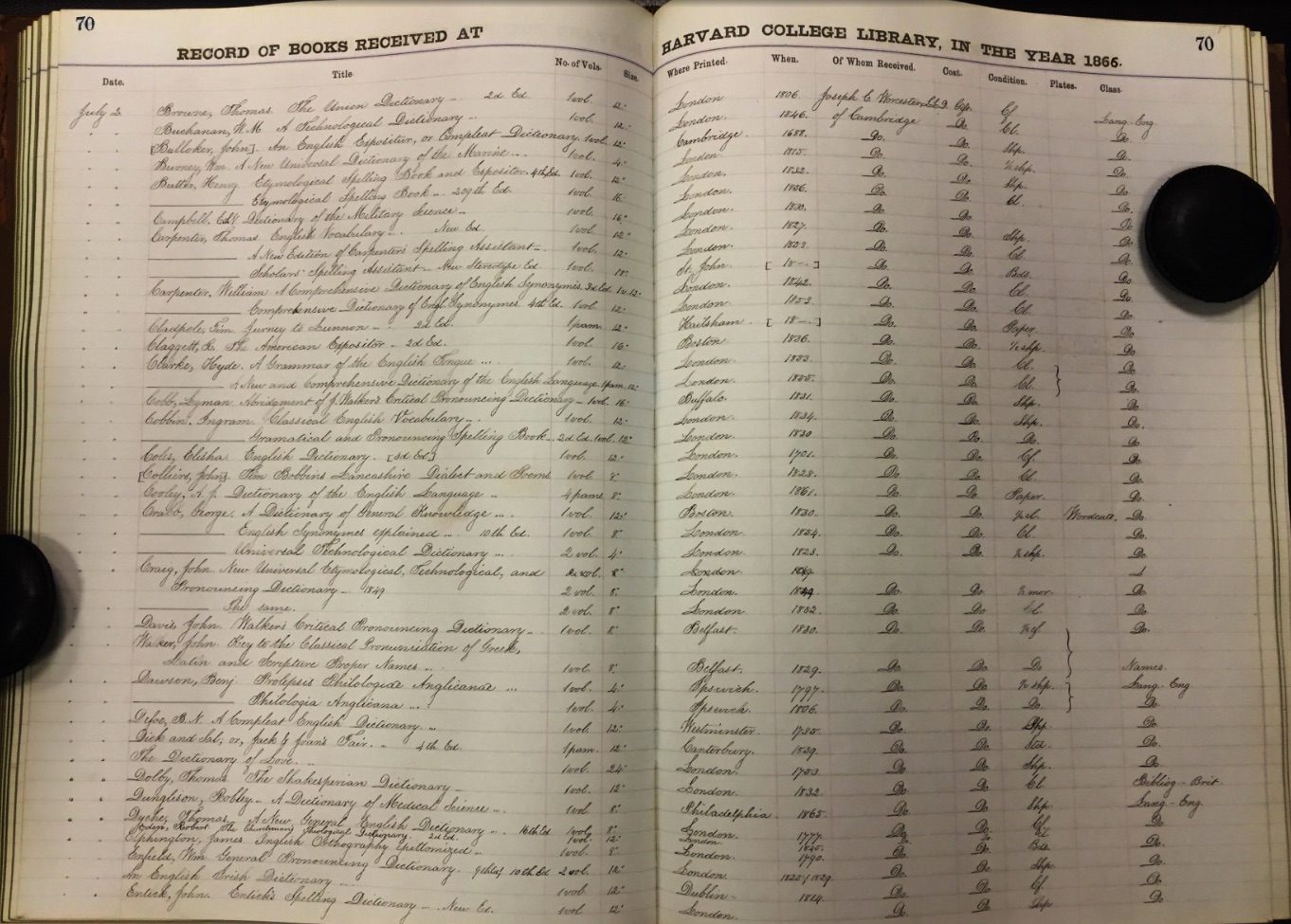 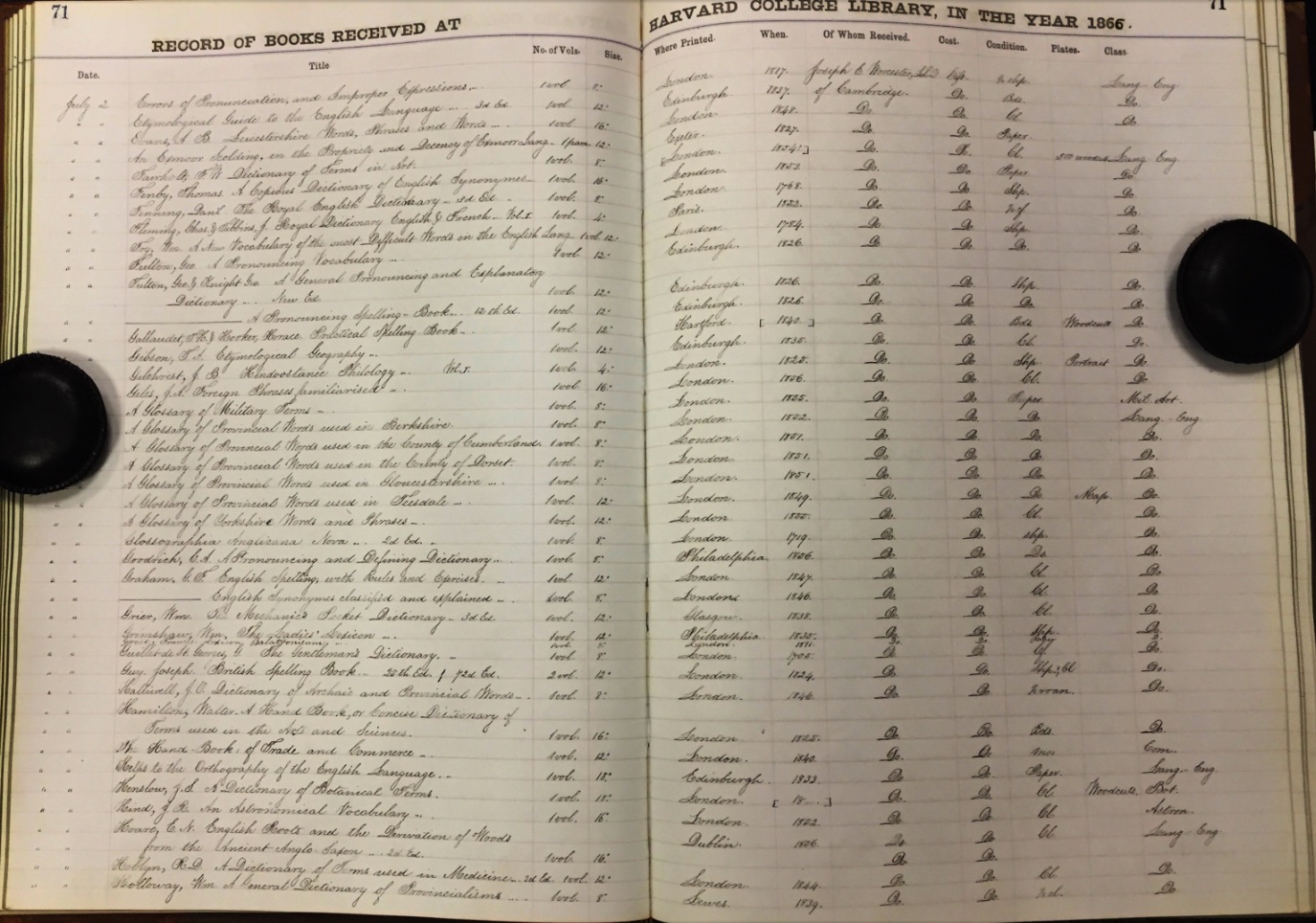 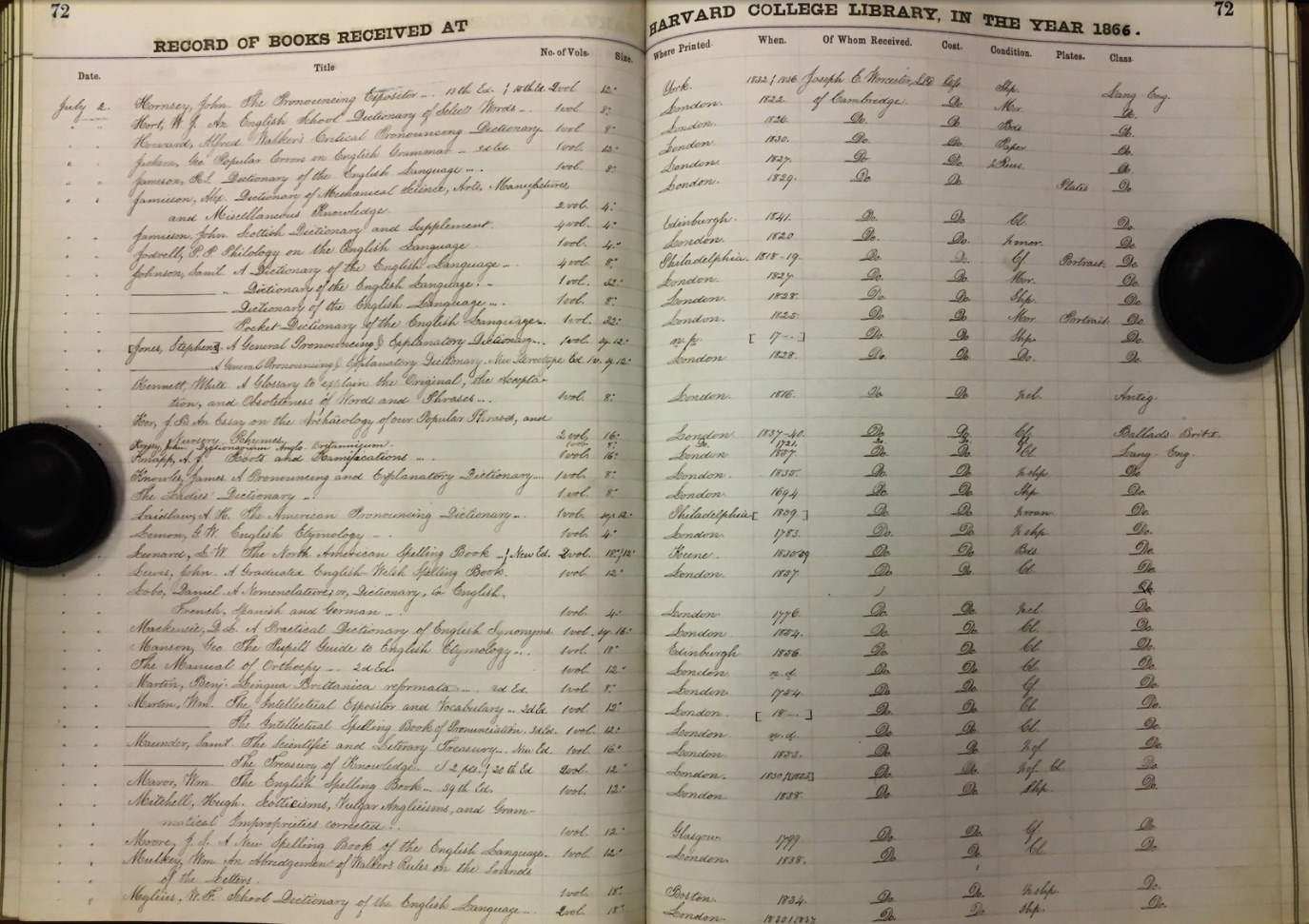 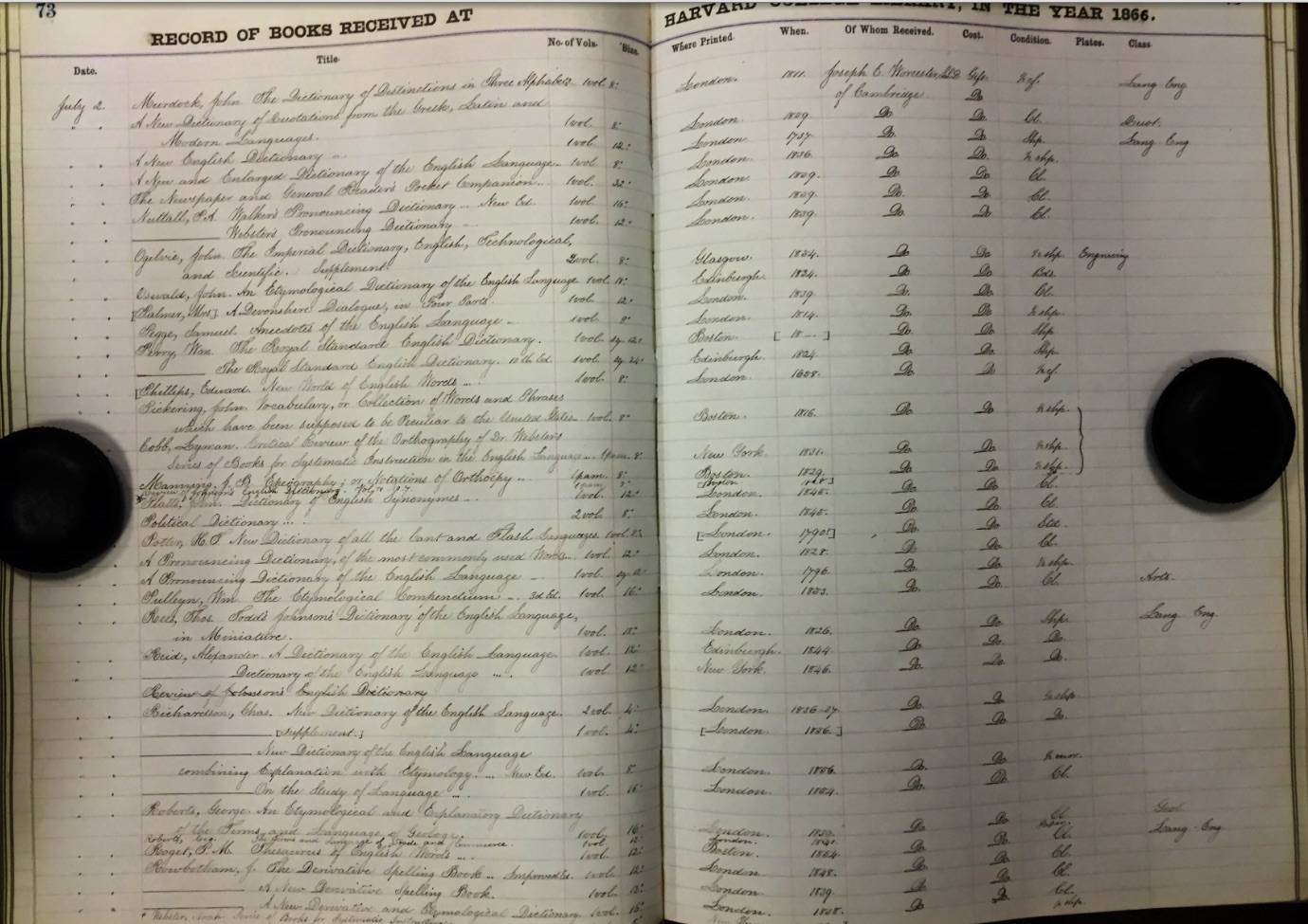 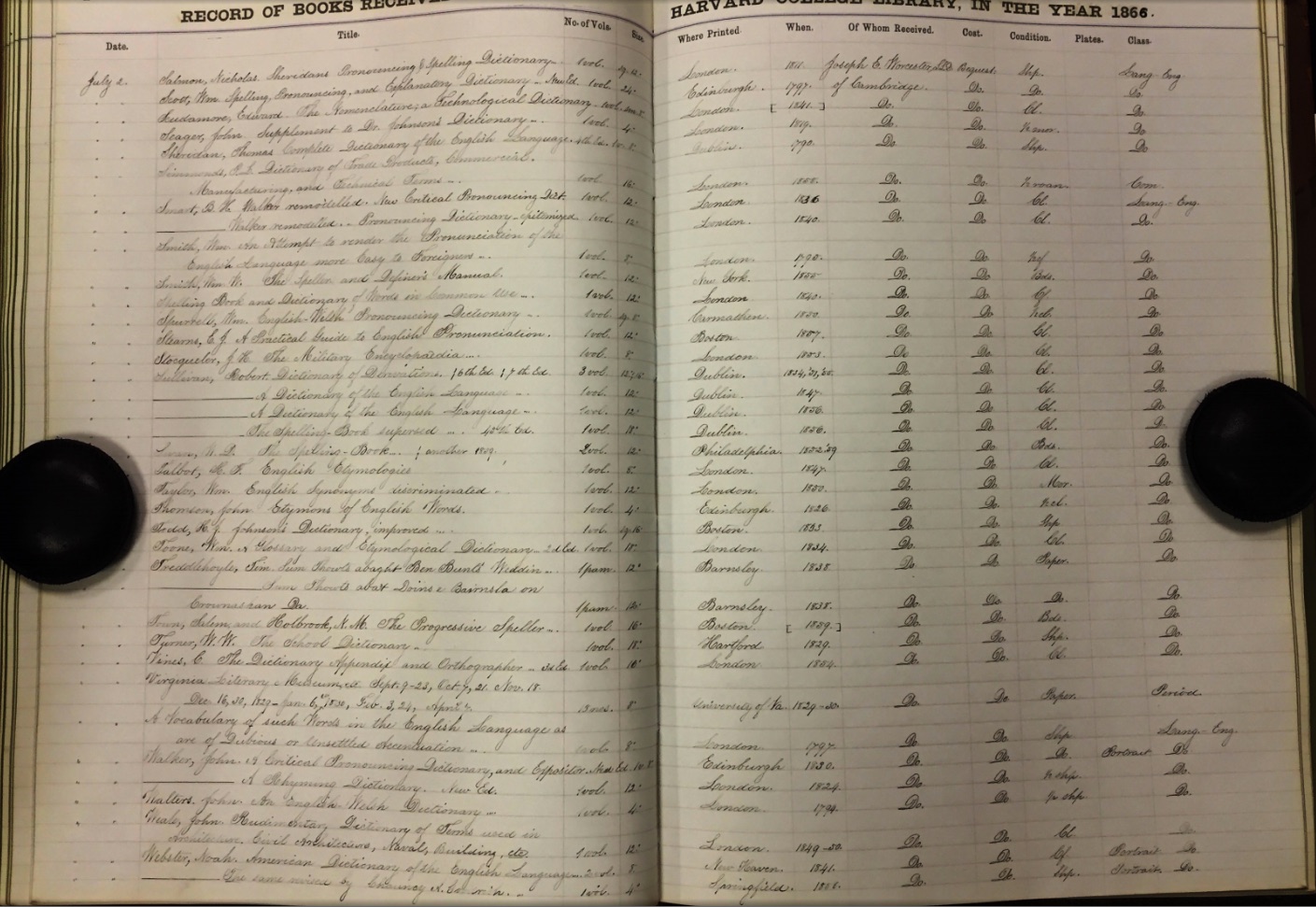 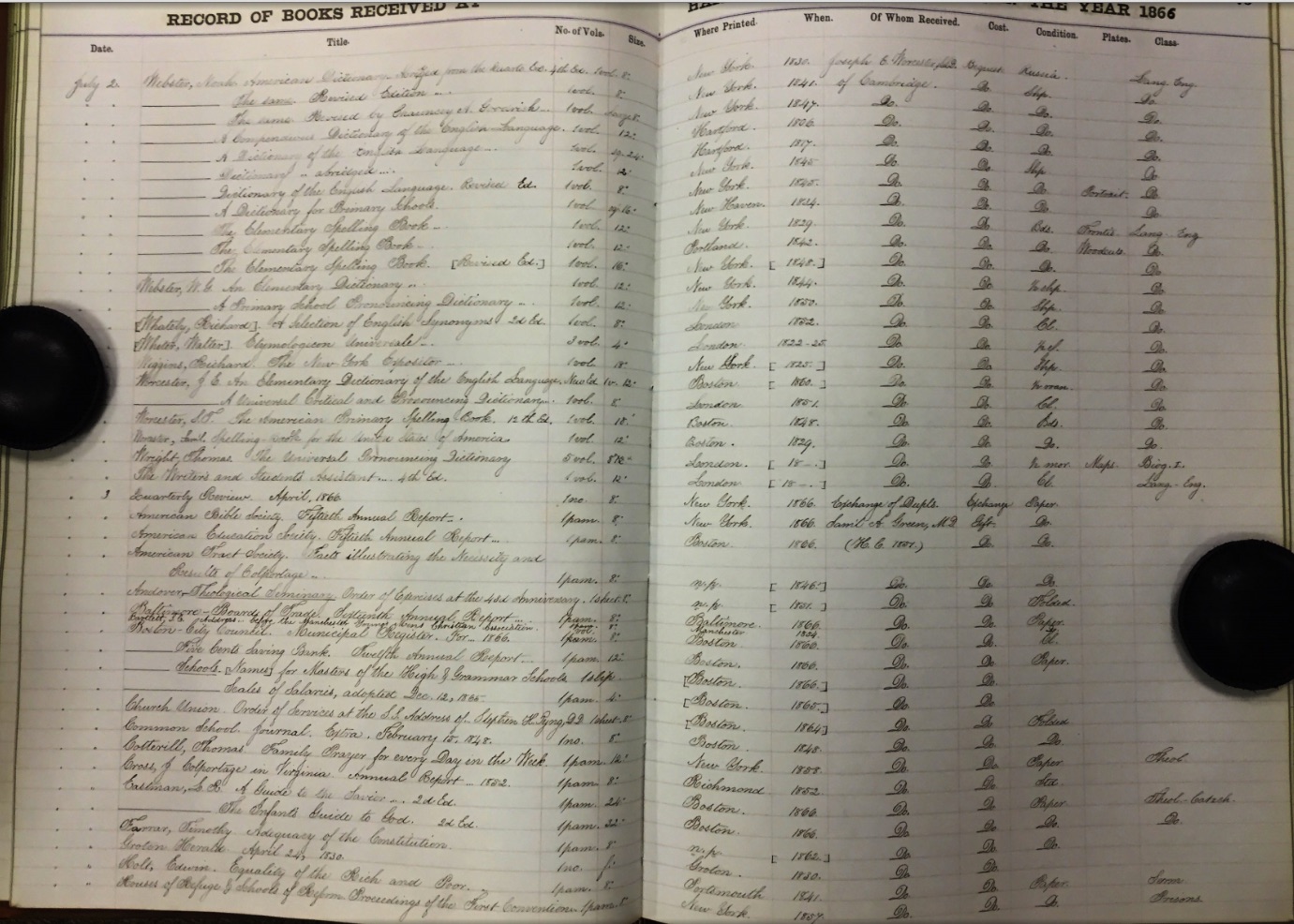 Listed on Page 69 of the Donation Ledger are The Ash Dictionary and the two Bailey Dictionaries which Joseph E. Worcester said he used in compiling his 1830 dictionary:


Of the one hundred and twenty-one, words in your list, eighteen are found in an edition of Bailey's dictionary, published more than a century ago, and twenty-one, in a later edition ; thirty-five, in Ash's Dictionary, published in 1775 ; thirty-seven, in Todd's Johnson's Dictionary combined with Walker's, edited by J. E. Worcester, and published before the appearance of yours; twenty-one, in Mr. Pickering's Vocabulary, published in 1816 ; not less than thirty in the Encyclopædia Americana, and nearly as many in Brewster's New Edinburgh Encyclopædia ; – and in these several works, upwards of ninety of the words are found, and many of them several times repeated. I have, in addition to the works above mentioned, about fifty English Dictionaries and Glossaries, in a majority of which I have ascertained that more or less of the words in question are to be found, but I have not leisure, at present, to go through a minute examination of them

Joseph E. Worcester
From his Feb. 6, 1835 reply in the Palladium
To Webster's accusation of plagiarism.

I have already started cataloging the Library of an American Lexicographer on Library Thing.  And I will catalog it at my leisure.  The 255 books given to Harvard do not appear to be listed in the other catalog of Worcester's library.