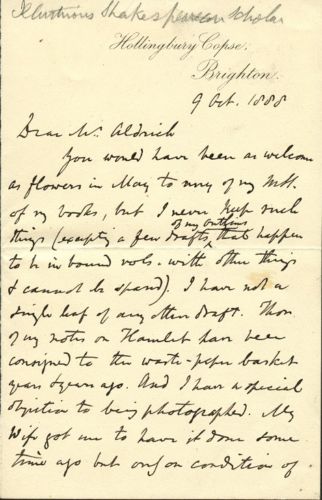 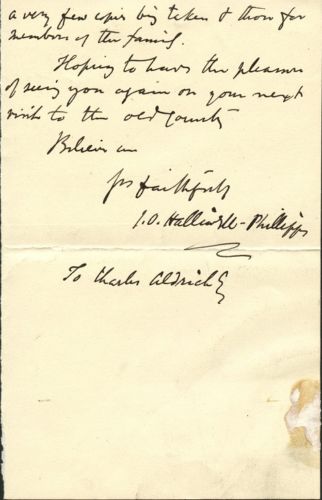 If the above specimen of J. O. Halliwell-Phillipps's handwriting is too hard to read, I deciphered it for you:

You would have been as welcome as flowers in May to any of my MSS. of my books, but I never keep such things (except a few drafts of my outlines that happen to be in bound vols. with other things I cannot be spared).  I have not a single leaf of any other draft.  Those of my notes on Hamlet have been consigned to the waste-paper basket years & years ago.  And I have a special objection to being photographed.  My wife got me to have it done some time ago but only on condition of a very few copies being taken & those for members of the family.
Hoping to have the pleasure of seeing you again on your next visit to the old country.

Charles Aldrich was anything but a moderate autograph collector.  He besieged the great, the famous, and the notorious with countless requests for autograph letters, scraps of their manuscripts, and portraits of themselves.  Yet, in the beginning of a January 1896 article in The Midland Monthly, about meeting Jefferson Davis—and, yes, he obtained a specimen of Davis's handwriting—Aldrich described his autograph collecting as moderate:

I have been in a moderate way an autograph collector, one of that queer species almost literally flayed alive by Thomas Carlyle, Ralph Waldo Emerson, and Horace Greeley, saying nothing of the objurgations of a somewhat lesser man here and there, like Julian Hawthorne, or the Prince of Wales.  I tried, however, to give away my collection, and thus, "get shut" of this folly; but when in 1884, the Judges of the Supreme Court accepted it as a gift to the State of Iowa,  good old Judge Beck put his hand on my shoulder and said:  "Now, Aldrich, we want you to consider this only a beginning.  Go ahead, and keep this Collection growing; and it will come to something one of these days... (406). 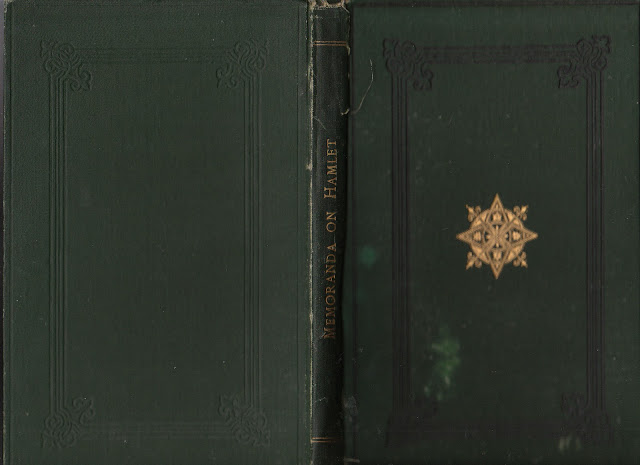 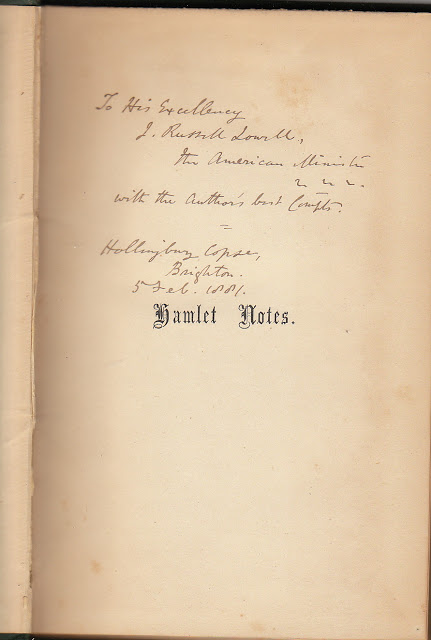 If you want to know more about Charles Aldrich and the Building of his Autograph Collection,  my source was Charles Aldrich's own words; words which he wrote in 1906, and which were published in  in The Annals of Iowa, in 1909, a year after his death: