The Early Editions
of
The Elements of Style


If there's a book you really want to read but it hasn't been written yet, then you must write it.


Did you know that one of the best little books on writing has one of the worst bibliographic records?  I am referring to the pre-1959 editions of The Elements of Style by William Strunk, Jr.


Pre-1959 Editions in My Elements of Style Collection 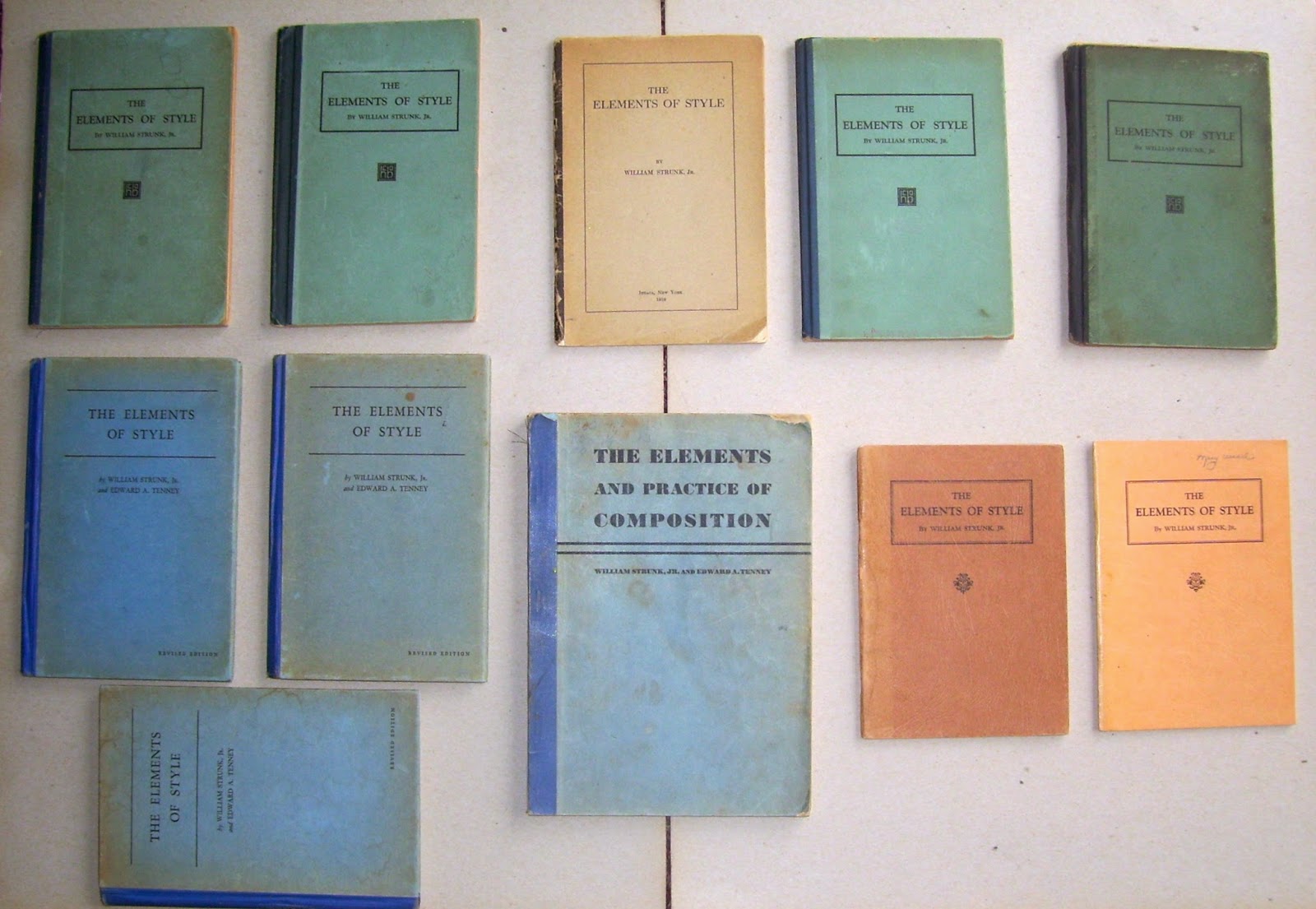 And now, five years later, there are several prestigious websites and libraries whose bibliographic records still identify W. P. Humphrey as the publisher of the first and second editions of The Elements of Style.   Moreover, numerous sources cite an incorrect publication date of the last edition published during Strunk's lifetime, The Thrift Press Edition.  As one bookseller on Abebooks  recently put it, "some sources say 1958, some say 1940s."  Another source cites 1918, while still another cites "1937 or after."

I am one of the sources that cite the 1940s. And I went even further in my April 2010 Biblio Researching blog post, "Stylized and the Forgotten Edition of The Elements of Style."  I cited 1943 as the date of publication.  I even stated that Strunk himself may have updated the list of recommended references, and replaced some of the words in the list of words often misspelled.

But before I do that, I need to pin down the  publication date of The Thrift Press edition.  I call this edition, "The Forgotten Edition," because Mark Garvey never mentioned it in his book.  Moreover, The Thrift Press edition is not listed in the bibliographic records of the Library of Congress; nor is it listed in the Catalog of Copyright Entries.

I can tell you that The Thrift Press edition of The Elements of Style is mentioned on page 348 of the Feb. 1958 issue of the Cornell Alumni News: 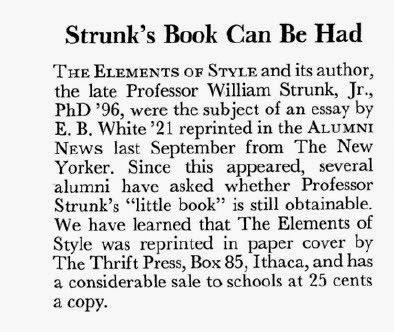 To answer that question,  I refer to one word on the title page of The Thrift Press edition: 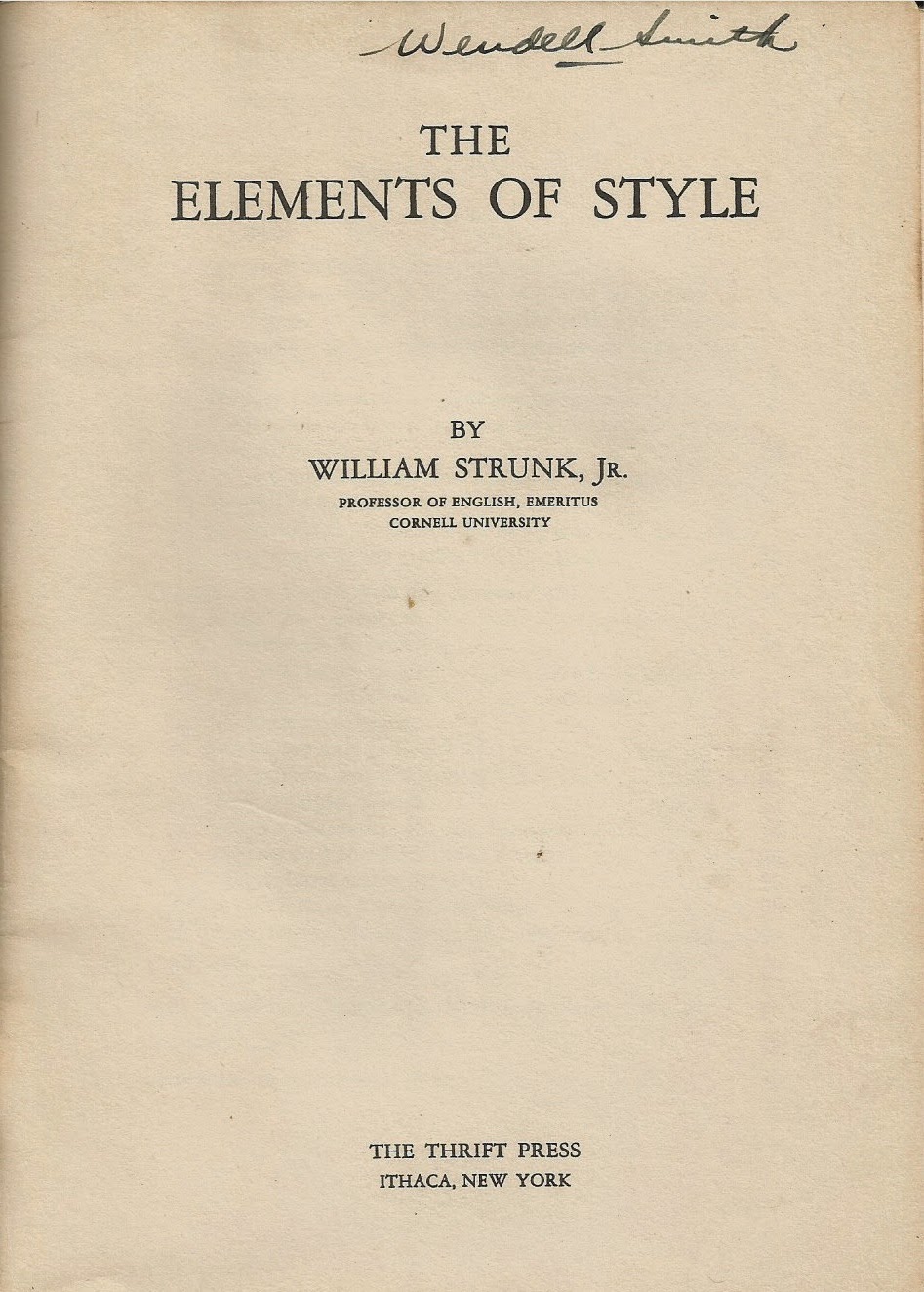 And that word is Emeritus: 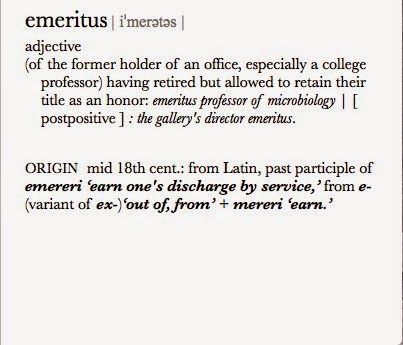 William Strunk retired in 1937.  He died in 1946.   The word, Emeritus, denotes that William Strunk was retired, but was still alive when The Thrift Press edition was first published.  It was first printed after 1936 but before 1947.


I bought my first copy of The Thrift Press edition on eBay in 2001.  And I wrote about the purchase on an old webtv website, which I managed to resurrect on weebly.com 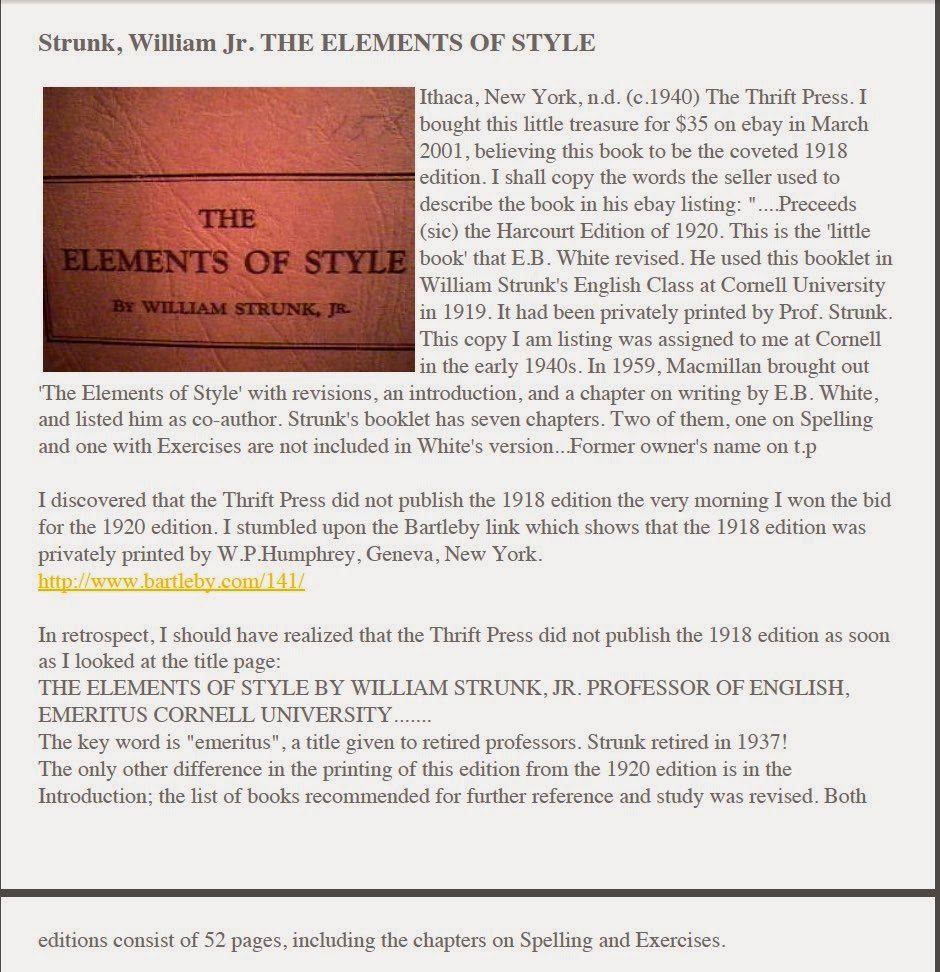 In the eBay listing, the seller, Wendell Smith, wrote, "This copy I am listing was assigned to me at Cornell in the early 1940s."

If I could verify his statement, I would have added proof that The Thrift Press edition was published in the 1940s.

So I googled "Wendell Smith" "Cornell" and "Alumni."

But I got lucky on the first result!

The link led to the May 1963 issue of the Cornell Alumni News, where I performed a search of "Wendell Smith."

And I found out where this Wendell Smith lived in 1963:

Next, I googled "Wendell Smith" "Rock Harbor Rd" and "Cornell."  And this led me to an interesting blog post.  A son posted an interview of his father and mother, which he had recorded while his father was still alive.  The son was the writer, Dell Smith.  And his parents were Wendell and Muriel Smith. 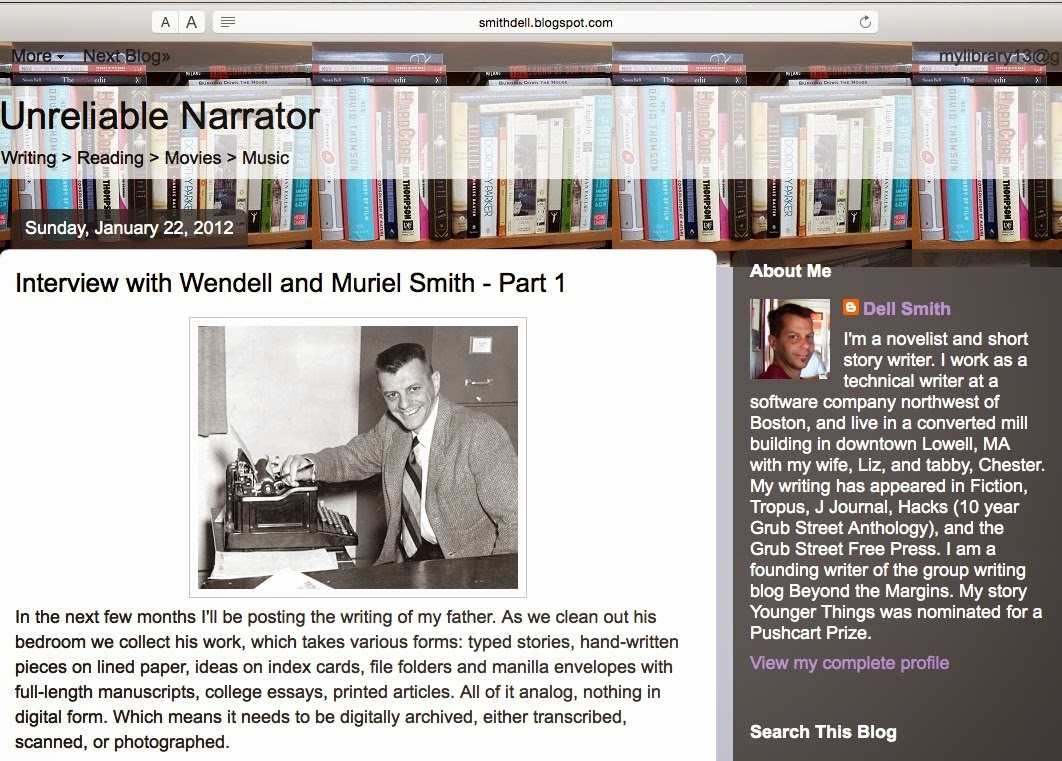 The blog itself  will be one of the blogs I'll feature on my Biblio-Connecting blog post for December 2014.

But here is the part of the interview pertaining to Wendell Smith's time at Cornell: 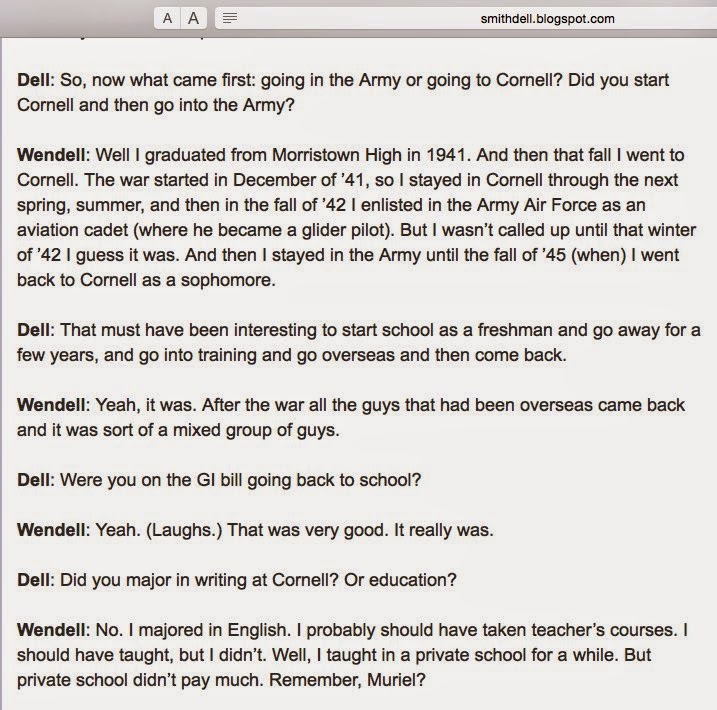 Further in the interview,  Wendell Smith revealed that he was a writer and a bookseller for the better part of his life, and that he sold "special books" on eBay.  His wife and his children are writers as well.

I still have more researching to do.  But I can safely rule out that The Thrift Press edition was published in 1958.  The latest Wendell Smith's copy could have been published is 1948, the year he graduated at Cornell.  Wendell wrote that the book was assigned to him at Cornell in the early 1940s.  He could have acquired the book in 1941 or 1942 before he went into the Army.  And that would eliminate my theory that William Strunk had The Thrift Press edition published in 1943.  Or would it?  In Mark Garvey's Stylized book, he notes that E. B. White took Strunk's course, English 8, in his junior year in 1919.  The course required a prerequisite English course, which, in turn, required an introductory English course.  If the course was still taught twenty years later, and if the requirements were the same,  Wendell Smith would have taken the course after he returned to Cornell in 1945.

Jerry, so glad my father's Strunk edition helped you fill in your sentimental library.

My name is Jerry Morris, not the same gentleman who has this site. As a teacher for 34 years, I was guided by the advice of my heroes of the written word, William Strunk JR and E B White. I wrote a book entitled Seven Sentence Building Activities to Develop Advanced Writers based on the exhortations of my heroes. Poking around the internet on a rainy day here near Boston, I am heartened to find another Jerry Morris who has the same affection as I for my heroes. Jerry, my oldest copy is held together with tape and an elastic. I carry it in my bag as I go around the country training teachers on writing. Flying home, I often pop open a Heineken and read the words of my heroes. I feel the cool beer going down my throat and the words warming my heart, my soul, and my mind. Jerry Morris, Marshfield, MA

Hello Jerry Morris! I enjoyed talking with you on the phone yesterday. I was surprised to learn that we share the same given name, Gerard. I was even more surprised when I asked you what your middle name was. You replied, "Thomas." I pause here, and say, "my middle name is Thomas too." I was afraid to ask you when your birthday was!