There are millions of books fit only to read, but there are
a few that should be treasured as the relics of the saints.

Harry B. Smith
A Sentimental Library, 1914

Well this gave me an excuse to grab my favorite volume of Johnson's Dictionary down from the shelf and look up the definitions myself. And that's when I got sidetracked. 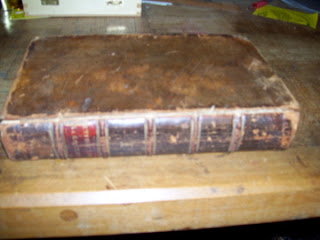 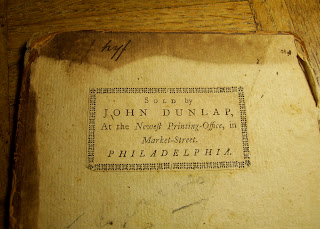 The front cover of this volume is detached, and will remain that way, but I still consider this volume to be one of the treasures in my library. 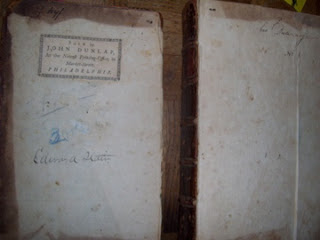 This book was formerly owned by Edward Stair, who signed his John Hancock on the front pastedown, below where an unknown hand overwrote "2 vols." 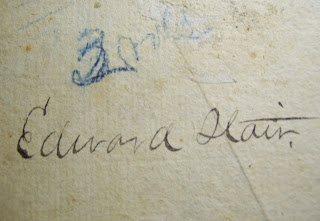 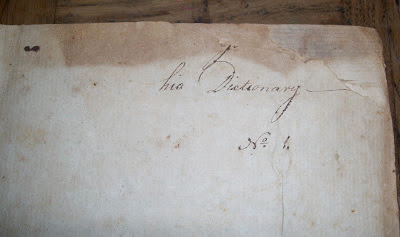 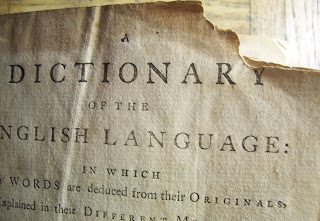 If there was a signature written on the title page, it was cleanly excised. 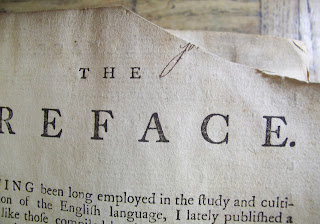 There may not have been anything written in the top right hand corner of the title page; but the year, 1770, was written in pencil near the bottom of the page by an unknown hand. 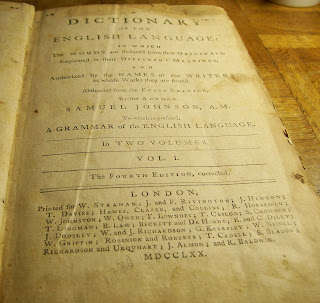 The only other writing in the book is on the front pastedown. In the top left-hand corner, an unknown hand wrote the letters "hy" and what could be the letter "f." The letters could be a bookseller code. There are impressions in the paper of other letters written in this corner but they are unreadable. 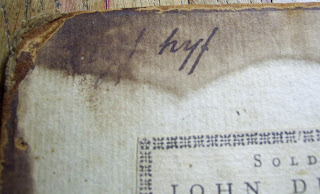 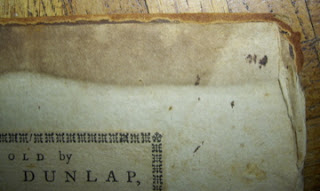 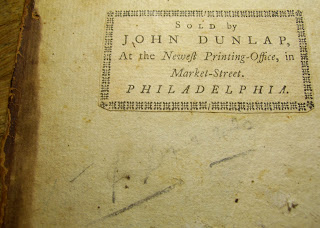 Now I have had this particular book since January 2004, and I never got to first base in identifying its original owner. But, I tell you, I had an Epiphany when, while researching the definitions of the words of the Second Amendment, I saw the exaggerated stroke of the descender of the first letter. It reminded me of the way John Hancock signed his name on the Declaration of Independence.

John Hancock, the President of the Second Continental Congress, was the founding father who directed John Dunlap to print the broadsides of the Declaration of Independence....Could this be his dictionary? No Way! Well ... highly unlikely. As you will soon see, the "J" the original owner inscribed in his dictionary is not the usual John Hancock "J." And it may not even be a "J" at all.

I have been down this road twice before. I have a book I thought belonged to George Meredith because someone wrote "Geo Meredith's copy..." on the ffep. But an expert on George Meredith told me the author would never identify one of his books like that. And then there was a book in which a note on the rear pastedown recorded that General Andrew Jackson bought the book in Washington District on Dec. 24, 1828. But on this very date, Andrew Jackson was 600 miles away burying his wife Rachel at the Hermitage in Nashville.

Twice bitten, thrice shy. Yet, I'm a glutton for researching almost anything, even seemingly lost causes. But I wish I had more to work on than two words, the descenders of two letters, and the phrase, "Nº 1."

The first things I wanted to research was whether there was any record of John Hancock ever having a copy of Johnson's Dictionary, and if Hancock ever used any phrase when he signed his books.

Johnson's Dictionary is not listed in the May 1860 Historical Magazine article of Hancock's library, which was reprinted from Hancock's 1794 probate records. 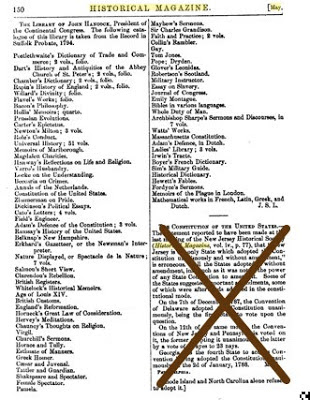 Nor did Jeremy Dibbell list a copy of Johnson's Dictionary when he cataloged John Hancock's library on Library Thing's Legacy Libraries, online catalogs of the libraries of famous readers. One of the books Jeremy did catalog was a 1737 edition of Bailey's Universal Etymological English Dictionary, currently in the Rare Book Collection of Stanford University Libraries. In the Comments Section of the listing, Jeremy added, "Signed 'J. Hancock's book 1754' on the title page, and 'John Hancock' twice on the front pastedown." I should note that Bailey's Dictionary is not listed in Hancock's 1794 probate records.

And in a 1765 book on sermons by Charles Chauncy,  which Jeremy also listed on Library Thing, Hancock inscribed his book, "Ex libris J. Hancock 1765."

Kathryn Clever Sisson included a piece about one of John Hancock's books in John Hancock Independent Boy, first published in 1963 as part of the Childhood of Famous American Series and reprinted in 2004 as part of the Young Patriots Series. When John Hancock was ten years old, he reportedly wrote his name and a short verse in a copy of Robinson Crusoe, which his uncle had given him the night before.

I could find no record that Hancock had a copy of Robinson Crusoe, nor if he wrote the verse Sisson cited in her book. Is the mention of the book and the verse fact or fiction? Kathryn Clever Sisson's research papers for the book are at the University of Southern Mississippi, just in case I want to research further.

Although I had only two words, two letters, and the phrase "Nº 1" to work with, I discovered there was a plethora of John Hancock's handwriting online, particularly in John Hancock's business letterbook in the Hancock Family Papers, Harvard University Library.

I created three Flickr photo albums to compare his handwriting to the handwriting in my book:

The ascender portion of the letter looks more like Hancock's "G."

Is this his dictionary?

Wow... what a detective you would make! I hope you learn that it was his book and that he gave it to a student, who gave it to another, and so on, thereby accounting for all the names.